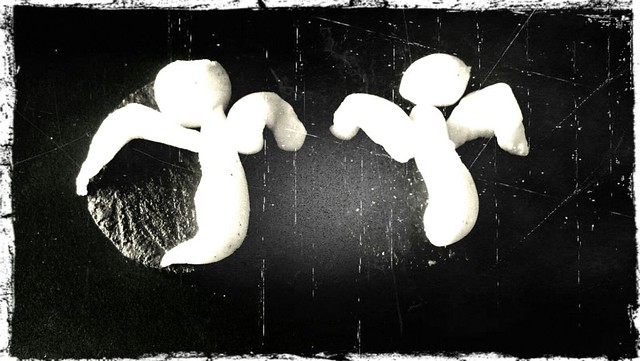 It’s Monday and it’s time for this year’s Reader Request Week! Let’s start this one off on a slightly spooky note, with this question from Mar:

I’d be curious to know, if you’re comfortable talking about it, whether you’ve ever had a “strange”, or for lack of a better term, what we might call “paranormal” experience. Anonymous data collecting seems to show that most people have, but are afraid to talk about it. I have had one experience that was very strange, and so have most of the people that I know. JF Martel on the podcast “Weird Studies” said that if everyone spoke freely about these events, we would be forced as a culture to include such phenomena in any attempt to form a coherent worldview. And probably also learn something about the nature of reality that we don’t understand now.

I’ve had a number of strange experiences in my life — “strange” meaning in this case events so entirely outside the normal range of my daily existence that some part of my brain felt compelled to remark “okay, this is some weird shit going on here” — but none of those things would be things I’d consider to be “paranormal” in the way the word normally gets used, i.e., in reference to things like ghosts and magic and aliens and extradimensional whatever. Every strange experience I can think of that’s happened to me is well-bounded in the physics and natural phenomena that we understand and can describe. At most, these events required extreme coincidence to have happened — but extreme coincidence does happen, so I don’t know that it’s all that surprising that it happens occasionally to me.

Now, I do think that this answer of mine speaks directly to my own view of the world, which is highly rationally based. As a practical matter, I don’t believe in things like ghosts or alien visitations or psychic powers, and I have a distinct bias toward rational answers to events. I’m not someone who believes in “fate” or the “hand of god” or even “we’re all here for a purpose.” So when strange things happen to me, my brain doesn’t see them as evidence of some paranormal activity of one sort or another; it goes “huh, that’s some weird shit,” and assumes it has some rational, physical basis. If you’re like that going in, then the number of paranormal experiences you’re going to have is already low. I am aware that many paranormal films feature someone who is all “everything has a rational basis!” who then gets eaten by, like, angry ghosts or demons or whatever in a gory and highly satisfying way. But that’s the movies for you. Real life is more boring, and more rational.

With that said, I do know a number of people who have reported strange experiences that would be considered to be “paranormal” in one way or another, and these people are folks who I like and love and consider solid people not given to flights of either fancy or delusion. How do I explain their experiences?

I don’t! I wasn’t there when they experienced what they experienced, and I’m not them. If someone tells me they experienced something outside of the range of what is generally considered natural phenomenon, then a) I’m perfectly willing to believe that something happened to them that was well outside their own usual range of experience, b) unless they are specifically asking me to postulate a rational explanation for their experience, I’m not the sort of person who has to be all “well, actually,” about this sort of thing. Something happened to them; this is how they decided to process it, and unless that is actively harming them or others, eh, fine.

This doesn’t mean I think they’ve likely had a paranormal experience, however. I’m aware of a number of things:

1. The remit of physical laws and phenomena is actually quite large, so more things can be explained rationally than many if not most people realize (and generally our culture has done a really crappy job explaining this fact);

2. Our culture enjoys paranormal storytelling to such an extent that when something strange happens, our brains use those familiar storytelling elements to explain what’s happening to us, i.e., if you’ve heard all your life about ghosts and something happens to you that fits the criteria for a visitation by a ghost, you’ll shove it into that slot, even if it has nothing to do with ghosts whatsoever;

3. Human brains are dodgy lumps of sentient fat that are both pattern-seeking and prone to misinterpreting and misapprehending new and strange things that are happening to them, which makes them especially vulnerable to magical thinking.

I also know this:

4. I don’t know everything about everything, and there are many things I cannot prove, so while I am 99.999999999+% percent sure that everything that happens to people has a perfectly rational basis in our universe, I do have to admit that my not knowing everything means I could be wrong about paranormal explanations for strange events. There could be ghosts and vampires and gray big-headed aliens and Nessie and angels so on. I think their existence is so massively unlikely that I don’t bother considering it in any serious way. But intellectual honesty compels me to admit I don’t definitively know one way or another.

So: I suspect most people’s paranormal experiences are probably not paranormal in any sense. It’s just their attempt to explain something that happened to them in a way that’s consistent to their understanding and knowledge of their world, the cultural clues that have been given to them and the manner in which their brain processed the event (and in which they subsequently remember it, memory being another dodgy and unreliable brain process). There’s maybe a >.000000001% chance it was actually paranormal! But probably not, and also, if thinking that it was paranormal allows them to process it and get on with their life without hurting themselves or anyone else, sure, okay, why not. I’m not going to go out of my way to be a jerk to them about it.

(I do think people who use the paranormal, and humans’ tendencies toward believing in that sort of thing, in malicious or detrimental ways are terrible people who I don’t have any problem stomping on. But I don’t think the original question is about con artists or malicious actors, it’s about normal people having experiences they’re having a hard time explaining otherwise.)

More to the point, I don’t think there’s any point in belittling or discounting people who believe in paranormal experiences, simply on that basis. I think there’s a lot to learn about how and why people think these events happen to them, and what more we can learn about the brain and the nature of consciousness from that. Human experience is bounded by how our brains process what’s going on around us.

If you’ve had a paranormal experience, you’ve had an actual experience, and your brain is working on how to explain that experience to you. It’s telling you a story about it — just like it does with every other event you’ve ever experienced. That’s some interesting shit right there.

← Krissy, As of Yesterday
Reader Request Week 2019 #2: The War Between the Generations →