Reader Request Week 2019 #2: The War Between the Generations 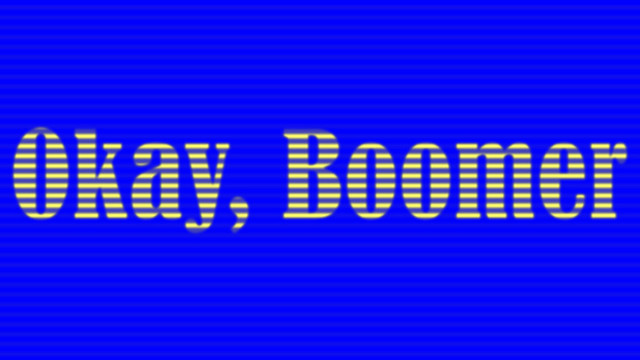 What’s your take on the generational conflicts of our time, currently manifesting in the “Ok Boomer” saying?

I think it’s par for the course, actually. Generational conflict makes for a good story and for good copy, and for the last 100 years or so in the US, at least, there’s been a low-grade panic about the disrespectful kids flouting the rules of society with their loose morals and bad music. Flappers and jazz! Greasers and beatniks and their R&B! Hippies and their psychedelic bands! Punkers and their, uh, punk music! Then heavy metal! And rap! And grunge! And so on and so forth up to today, with Gen Z and, I’m sure, whatever they are listening to (I honestly have no idea at the moment, which is not a reflection of the quality of their pop music, I’m just a bit clueless. Is it K-pop? I think it’s K-pop. Let’s say K-pop).

The special sauce of this particular moment of generational conflict is that it involves the Baby Boomers for the first time being the antagonists of the generational story, rather than either the protagonists or the somewhat neutral mainstream. The Boomers are now the older generation and are having a moment being seen as the ossified and inflexible group whose opinion is not worth considering, and they don’t appear to like it at all. There is the (some would say delicious) irony of the generation that famously professed it would never trust anyone over 30 having become the generation that those under 30 allegedly doesn’t trust. I’m pretty sure the Boomers don’t appreciate that irony at all.

This is the point were someone will say #NotAllBoomers, or whatever, and I’m perfectly happy to concede this point. Indeed, #NotAllBoomers, and #NotAllGenX and #NotAllMillenials and so on. It’s utterly impossible for any cohort of millions of people — whatever that cohort might be — to be in lockstep on everything. Likewise generational groupings are not the distinct things we like to pretend they are; there’s a squidgy period where whether you’re a Boomer or GenXer is really a matter of personal choice, likewise between GenXer and Millennial and so on. People go positively talmudic on this sort of thing, pulling out their favorite book of generational demographics to inform you that if you’re born in [insert year here] you’re definitely [insert generational name here] and that’s all there is to it. And, meh? Personally I’m not so wedded to the idea of discrete generational cohorts that I feel a need to argue about it at that length.

What is largely accurate is that the choices older generations make in aggregate, affect the world the younger generations in aggregate have to live in, and very often those choices are the focus of conflict. Both positively but also negatively, and the negative ones tend to get more press. For the Boomers, the choices of earlier generations meant they had to deal with (and some fight in) the Vietnam War, and both the Boomers and GenX lived in the shadow of the Cold War. For Millenials and now Gen Z, their world is shaped by earlier generations’ choices after 9/11 and regarding climate change. For Gen Z in particular, they had no say in the election of the current president, whose policies and practices should (and apparently do) fill them with horror.

I don’t think there’s much to be done about this sort of generational conflict. People are always being born and having to deal with the world made in aggregate by people older than they are. They will not always just accept the world they have been given and will seek to change it. The older generations will die off, the younger generations will have children of their own. Lather, rinse and repeat.

It’s also worth noting that the conflict between generations is often a sideshow to other demographic conflicts. The “generational conflict” in the United States, at least, is often a stalking horse for conflicts between conservatives and liberals, white people and everyone who isn’t white, and the rich and everyone who isn’t rich. “OK Boomer,” as I’ve seen it used (when it is not being used ironically) is less specifically relating to everyone born in that generational cohort as it is relating to the sort of white, conservative, wealth-justifies-everything mindset that typifies the most egregious sort of political actors among older generations, the ones who aren’t listening to anyone else anyway, so sure are they that they both should and deserve to get their way.

An assertion that all Millennials and Gen Z folks despise all Boomers with their one-day-dying breath is belied by the persistence of Bernie Sanders and Elizabeth Warren in the top ranks of the presidential contenders due to their support among the young(er) folks. The issues here are generational but not merely or precisely generational — they are about whose voice matters in the political and social process, and in shaping the world now and in the immediate future.

As a dyed-in-the-wool GenXer, I’m not particularly threatened by the idea that at some point a younger generation might come for an accounting of what my generation did or did not do, because ultimately the older generations should have to answer for their choices, and individuals for their own actions. I think as a political and social actor my generation gets a mixed report card; it pains me that the most prominent politicians of my generation to date have been Ted Cruz and Paul Ryan, for example. But we’ve done some good as well; I think it’s our generation that moved the ball most considerably for the rights of gays and lesbians here in the US. We haven’t been perfect, but a cohort of millions isn’t likely to be.

I accept that there will be a judgment from history, “history” being a very distancing term for “the people who come after you.” Which is to say: the younger generations. Bring it on, kids.

55 Comments on “Reader Request Week 2019 #2: The War Between the Generations”