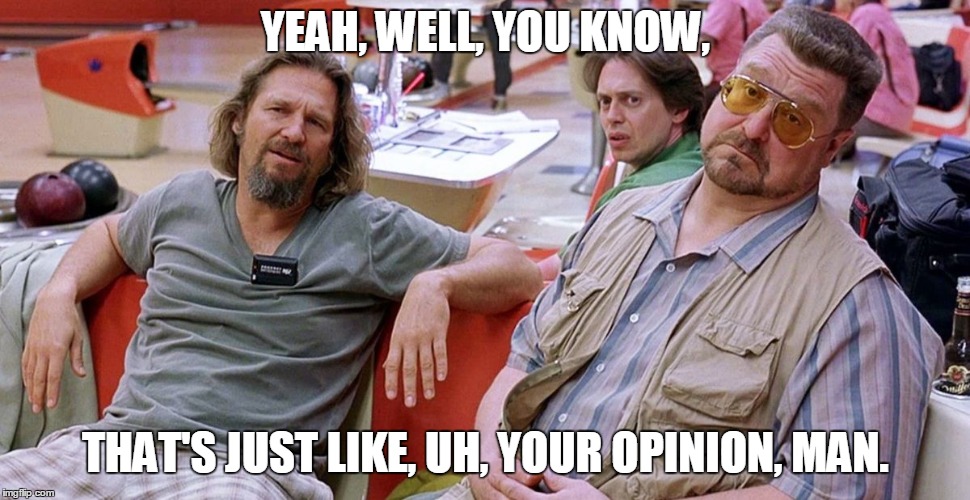 One noteworthy aspect of your blogging style is your extreme confidence. If you have an opinion to offer, you may caveat it in various ways, but usually not in ways that indicate any uncertainty. For instance, you rarely prefix statements with “I think that” or “Probably” or other indications that while this is your view you acknowledge that you could be wrong.

To what extent is that conscious? Waffling on opinions doesn’t necessarily make for compelling blogging, even if it might be good epistemology. Do you aim directly for “authoritative and confident” as your blogging voice, or is that just how it comes out?

Well, first, I’m not sure I agree with the suggestion that I don’t put qualifiers like “I think” or “probably” in my posts here, since I just did a search for both phrases in recent pieces and they both pop up not infrequently. Second, I’m pretty good at admitting when I don’t know things, because I think it’s fine to admit there are things I don’t know, and that as a consequence whatever I’m saying about a particular subject I don’t know much about will have to be tempered by those facts.

Third, there is a site disclaimer, accessible on literally every page of this site, which covers this pretty clearly:

Everything on the site is my opinion (except comments written by others, which are their opinions). I have strong opinions. At times, you may not agree with these opinions, or how I choose to express them. This is not my problem.

Having written in the site disclaimer that what I write is here going to be my opinion, I don’t feel obliged to hem and haw about things every single time I write a post. It’s covered, you know? And if someone is all “well, that’s just, like, your opinion, man,” I’m all, well, yes, obviously, did you not read the Site Disclaimer? It’s right over there in the sidebar.

So, I don’t think it’s that I write in a way that’s heedlessly unqualified; it’s that I’ve set up the site — and my internal world view — to entertain and accept the possibility that what I’m writing is a) my opinion, and also b) I might occasionally be wrong and indeed c) I might have my head entirely up my ass. Having done so, I’m able to proceed with a minimum of fuss.

It is absolutely true that when I’m holding forth here on one topic or another, it’s of a tone that could possibly be best described as “avuncular omniscient” — the voice of someone who is both confident in their opinion and in the belief that what they are saying both should be heard and heeded, and who pitches that voice to be generally accessible to a wide audience. Why do I hold forth in this manner? Well:

1. I used to be a professional newspaper opinion columnist, and “avuncular omniscient” is (or was) the default tone for newspaper columnists.

2. Before I was a newspaper columnist, I wanted to be one, and read a whole bunch of them both for entertainment, and to internalize the stylistic and rhetorical elements of that format. So one could say the “avuncular omniscient” is part of my baseline writing study.

3. I’m a straight white dude and straight white dudes are used to both expressing their opinions and also assuming those opinions will be heard. As I’ve gotten older and smarter I’ve better internalized the idea that in the great wide world I need to bring more to the table than just “Hey, I’m a straight white dude and I got opinions.” Because that sort of person is not exactly thin on the ground, if you know what I’m saying. In the world outside this blog, I try to be better at making space for people who aren’t like me to have their say. I want to be part of the mix of voices, not necessarily the only voice. But here, in my own personal space that no one has to visit unless they choose to, my holding forth is not getting in the way of anyone else having an opportunity to be heard.

4. Also, and in a general sense, I’m not exactly shy, am I, and have never been. In addition to all the reasons noted above, this particular tone is me, or part of me, at least, the part that is tuned to addressing an audience. And I like addressing audiences — writing for me has always had an assumption of a readership outside of my own head. I’ve always written outwardly. And when you do that, you write to project your thoughts, rather than keeping them small and quiet, and hoping someone who wanders by peeks in to see what you’re up to.

Are there drawbacks to this “avuncular omniscient” tone? Oh, my, yes! This sort of presentation can make one comes across as heedless, clueless and obnoxious, especially if one is indeed some combination of those things. It is the tone of “that asshole with an opinion,” and in recent years one could easily say it’s been weaponized by the sort of alt-right chucklefuck who understands the rhetorical value of swaddling hate and bigotry in a moderate-sounding tone that your grandparents were trained by years of daily newspapers to file under “reasonable” in their brains. These chucklefucks aren’t good at maintaining that tone, I should say, and the minute you poke them they revert to a sort querulous whining. But that doesn’t mean they don’t use it.

Nor have I in my time avoided these drawbacks entirely — not the alt-right bullshit, mind you, that crap has nothing to with me. I’m talking about the “heedless, clueless and obnoxious” part. There’s a non-trivial number of people who find me and/or my tone here exhausting and enervating, and as a result choose not to have anything to do with me or the site any further. Also, there has been more than once where I led with tone and then showed my ass and then had to try to find a way back from that, which usually involves apologies and redoubled effort to do better in the future. As I’ve become a better writer and, I think, a better person, I screw this up less, but it’s not to say that I don’t still screw up, or that I won’t screw up again. Life is a learning process, or at least it should be, and you try to keep doing it better.

At the end of the day, however, I write the way I write because I am who I am, and I while I heartily admit I am and will always be a work in progress, sometimes wrong and always learning, I don’t see the presentation of who I am on the blog changing all that much over time. On balance it’s served me well, and I think it’s served the people who read here well. Of course, that’s just my opinion.