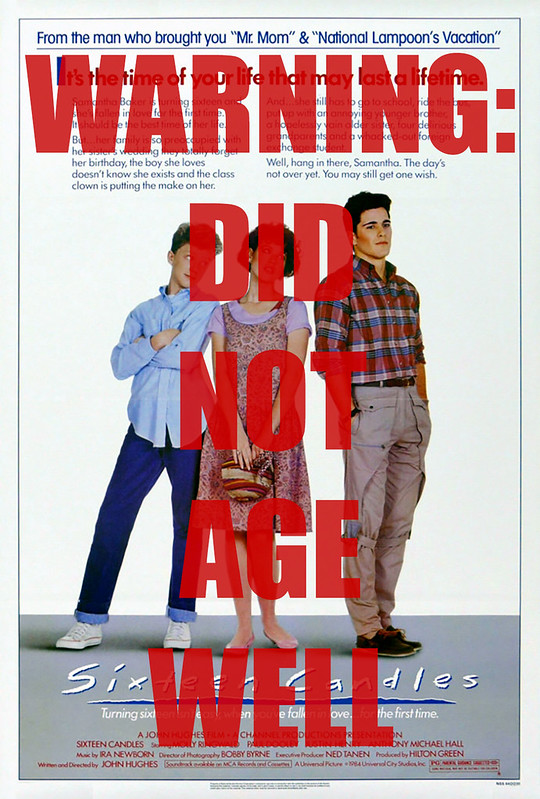 For this entry, Amysrevenge wants to know about:

Things you fall out of love with as you age. Example: Heinlein was super relevant to 22 year old me in 1997. He was enjoyable to 33 year old me in 2008 in a nostalgic sort of way. He basically isn’t relevant to my interests anymore at 44 years old in 2019. Do you find yourself letting go of things that you’ve… I don’t know if “outgrown” is the right word, but let’s say outgrown, that once were very important to you but now aren’t part of your life, or do you hold on to those older interests?

I generally let them go. For one thing, time is short, both on a daily and on an existential basis, and there is only so much of it that I can devote to enthusiasms. So for the most part I’m going to go ahead and focus on the things that I’m enthusiastic about now, rather than the things I used to like when I was younger (which is a lot of things when one is 50) but no longer really have an interest in anymore. I have enough stuff I like now, you know? It’ll keep me busy enough.

Also, I think it’s perfectly fine to let things go, and to realize that just because something was important to you at a particular time and place in your life doesn’t mean you are beholden to it your whole life. Times change, people change, hairstyles change. Equally valid, it’s okay to still like things you liked when you were younger, but just have them be less important — a thing you were super passionate about ten years ago can be something you interact with only occasionally now, for example (and vice-versa). Additionally, some things you may find you never outgrow, and that’s cool too. It’s okay to have things that are part of you all your life.

I think what can complicate this festival of enthusiasms is when, as sometimes happens, there’s something that you liked or loved that has become part of your self-identity, and thus it becomes much harder to separate it out as you get older. Lots of enthusiasms have communities around them — look at the fandom of science fiction and fantasy as a very relevant example of this — and in those communities people often find friends and partners and an identification that speaks to their soul. Separating one’s self from something like that (not just SFF fandom but any community) is hard. It’s easy to feel like you’re turning your back on people when that happens.

(The flip side of this also happens — sometimes the community and the enthusiasm just plain disappear. 25 years ago I was active on USENET and on the newsgroup alt.society.generation-x. The people there became a community and would have things like get-togethers (called “tingles”) and group events and so on. Then USENET stopped being a thing and people drifted away from the newsgroup (it’s still technically there, it’s just a shell), and the context for that part of my life went away. Some things are bounded externally rather than internally. Moments pass for all sorts of reasons.)

I look at my own life now and I can think of things for which my enthusiasm level is in flux. I used to play video games a lot more than I do now, as an example — I tend to play them less now because I have less time for them, and also because so many of the major video games really really really really want me to have to play with other people (which I mostly don’t want to do) or either pay for things within the game itself, or grind away senselessly to get a hat (or whatever) that I don’t care about. I was really into making electronic music at the first part of the century, then got away from it for years, then picked up guitar and ukulele for a few years, and am now swinging back to electronic music again. I like science fiction fandom about as much as I used to, but these days when I go to conventions I tend not to do a lot of panels, which was a thing I used to really enjoy, but these days I find not as much fun (and also, I get bored with myself on them pretty easily). On the other hand conventions let me DJ dance parties now, and I’m really enjoying that.

Then there are the creative people whose output meant one thing to me when I was younger but means a different thing to me now. To use the example of Heinlein above, I can’t read Heinlein at 50 years old with the same simple joy that I read him at 15 — but this doesn’t mean I don’t still read him. I read Time Enough For Love, Citizen of the Galaxy and Friday this year alone, mostly on airplanes because that’s where I do “comfort food” reading. My reading of him today is, I think, more nuanced and rather more aware that the hand that created these characters and incidents is not neutral. As a result, my relationship with the work and the author has changed. I wouldn’t say I’ve downgraded my opinion of Heinlein; I still admire him and his writing skill. I would say I have a better understanding of him as an author and creator and a person of his time, with work that now exists outside that time and has to be recontextualized because of it. Everything is more complicated there, and that’s not a bad thing.

And also, there’s the fact that at 50 years old, my frame of reference for writing and writers is a much broader and wider one than when I was 15, so Heinlein’s relative position in that frame has changed substantially. It’s not just him, it’s also every other thing I liked and enjoyed at 15: films, music, television, art, etc. I still enjoy Heinlein; I still enjoy the music of Journey and Depeche Mode; I still enjoy a lot of things that were important to me at 15, and acknowledge their significance to me at that age. I also have better idea where they stand in the larger landscape of art. Doing so does nothing to diminish their importance to me in a certain place and a certain time in my life.

With that said, there are some things I enjoyed when I was younger that I just can’t go back to. Jo Walton famously describes this as your favorite work being visited by the “suck fairy” — you re-read (or re-watch, or re-listen) something you remember loving and you’re appalled at how terrible it is. The art itself hasn’t changed, but you have, and that makes all the difference. This too is okay, and a reminder that before you recommend something you loved 30+ years ago to anyone else, maybe check in on it again to see how it holds up. The number of GenX parents who fired up Sixteen Candles for their own kids to watch just to be horrified at the racism and sexism that they totally forgot was there is too damn high.

The gist of all of this is: Yes, I can let things go when they aren’t speaking to me anymore, and I think that’s fine and a natural aspect of life. You can and should too, and when you do, it’s okay not to overthink it. Times change. People change. Hairstyles change. And you’re making room in your life for new things and experiences to speak to you in ways that engage and inspire you. If you’re lucky, you get to have that happen to you your whole life.