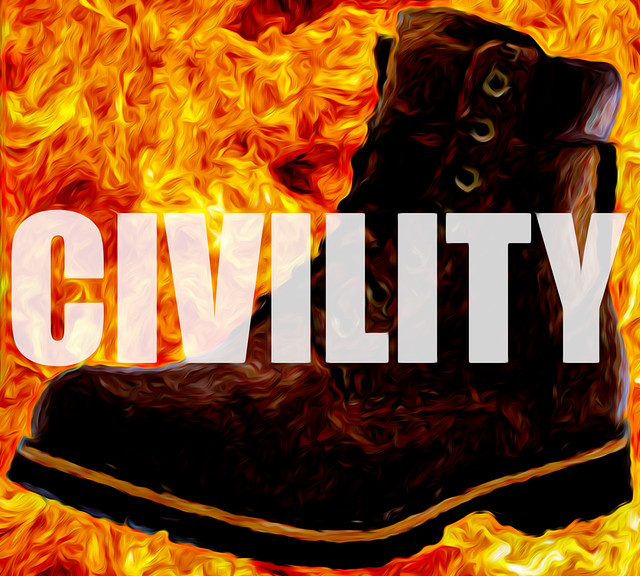 In an email, Pablo asks:

Civility: A genuine plea for common understanding, or just another tool to oppress?

I mean, why not both?

Which is to say that one can genuinely wish for “civility” — a sort of courtly and dignified mode of discourse — without understanding all the ways that “civility” generally favors the more powerful parties in said discourse and/or can be used to mask or minimize within the discourse wholly awful ideas, events and opinions. Even the less formal versions of a desire for “civility,” the plaintive cries of “be nice” or “can’t we all get along?” have within them this same dichotomy. And this is why, almost inevitably, “calls for civility” are usually issued by those who have power (or belong to a powerful group): because it’s a rhetorical system of control, whether the person issuing the call consciously realizes it or not.

But let’s back up a bit. When is “Civility” just, you know, civility? Which is to say, two (or more) people engaging each other in a polite and courteous fashion? It can happen, right?

Sure! For example civility is easy when the parties engaged are at or near the same social/power level with each other. If you belong to a country club, chances are you can be perfectly civil to every other member of your country club, because you all are of more or less the same stratum: Probably professional, probably white-collar, probably of a certain level of wealth (those country club fees are a thing), probably possessing a particular world view, and so on. I pick “country club” here because it’s an easy thing to pick — and to pick on. But other organizations or fellowships work just as well. I recently joined a private library, which is a place that holds book events and author tours and so on; just the sort of place where I could meet other like-minded bibliophiles, who also have enough means to subscribe to a private library. I have no doubt the membership is generally perfectly civil with each other.

Likewise, civility is easy when it’s forced on you from above. There’s a near example of this: This very blog, which both has a comment policy and a moderator (waves) who isn’t shy about shaping the conversation, or deleting comments when people go out of bounds. As a result, on average, people here tend to be polite(r) to each other when they comment here than at many other places online. They are, in a word, civil. Because they know if they’re not, they lose the ability to participate in the discourse entirely. I am very clear I am practicing a system of control here — this is my house online. If you don’t want to behave when you’re in my house, you can get the hell off my lawn. Most people get that and play by the rules. Which are, again to be clear, my rules.

(Mind you, I am not enjoined to play by the same rules as everyone else here. Which is also in line with the general facts of a system of control.)

Lateral Civility — the civility of peers — is easy to have because no one person is at a particular disadvantage to any other in terms of power or status (or if they are, it’s because of other factors, and that disadvantage is often temporary). Top-Down Civility can be less congenial because even if it’s “evenly” applied, it favors those people who attitudes, status and world view are similar to the person(s) enforcing that civility, and who better implicitly understand the rules of the civility road, as it were. Civility almost always favors the “in group” whose status is not in question, and whose status is unlikely to be threatened.

So, for example, take me: Hi, I’m white, male, straight, well-off and in the cohort of age whose hands are currently on a lot of the wheels of industry, government and the creative arts. Also for the last decade or so I’ve been at or near the top of my chosen profession. I’m not an outsider in any meaningful sense. It’s super-easy for me to practice, engage with and benefit from the rhetoric of civility, because I have nothing to lose from it. And I like civility! It’s nice when people are polite to each other and we can get through whatever we’re getting through with a minimum of social friction and anxiety. Moreover, as the social primate I am, I don’t like it when people are uncivil, and attempt to make me feel uncomfortable —

— which is, to be very clear, the magic of the rhetoric of civility: It creates the conditions by which being uncivil — not playing by the rules of the “civility” game, however they were created and imposed — becomes the emotional and dialectical equivalent of any possible actual wrong that an aggrieved party brings to an issue.

So: Yes, the water system of Flint, Michigan is literally unsafe and has been made so by bad governance, but you were a dick about it to me in an online discussion, so that’s just as bad. Yes, this oil spill ruined miles and miles of coastline, but then someone had to go and splatter an executive of the company that caused the spill with the blood of a dead, oiled seabird, and that’s just uncalled for. Sure, that smooth-talking alt-right dude would happily murder the Jews if he thought he could get away with it, but then someone punched him and made him cry, so really, both sides are bad, aren’t they?

Which is why people who are not on the inside are wary of “calls for civility”: They are being told that to be heard, they have to engage in a rhetorical system in which the value of their actual injury is held to be the equivalent to the value of the other side’s emotional investment in the rules of discussion. “Yes, you are suffering, but you were also rude to me about it, so my suffering is the same.” Which is, you know, bullshit. And the injured know it, even if the person calling for “civility” is not.

Additionally, when one “calls for civility” one is very often asking people who are genuinely aggrieved to engage in a rhetorical system in which their actual injury is not seen as a problem to be addressed, but an item to be debated — which means a lot of dudes out there with no skin in the game, or who are actively malicious, laying out their “Debate: The Gathering” cards, with the sole object being to “win” the discussion, and to string it out into irrelevance. When “civility” is a stalking horse for crap like this, there is no value for those with actual injury to engage with it; it literally does them no good to do so.

If you want people to engage in civility then the answer is simple: Help to create a world in which “civility” does not inherently and explicitly disadvantage the most injured party — where such rhetoric of discourse isn’t a system of control. It can be done! But, well. It will take a lot of work. And the real question is whether the sort of person who always calls for civility wants that world at all, or is in fact satisfied with the world we have now, because “civility” is just an excuse to treat people in an uncivil manner when they call out the game for what it is.