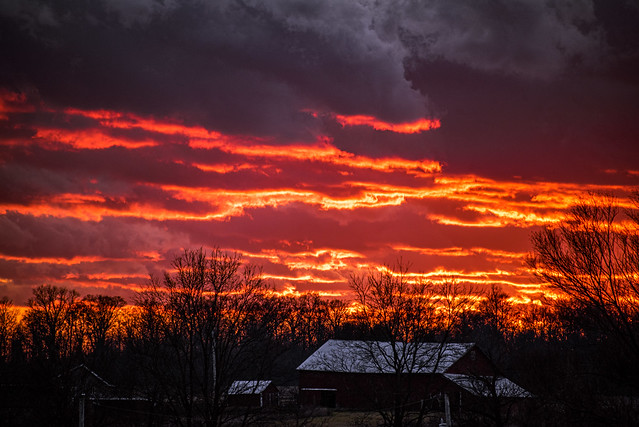 The first sunset we’ve had this month — every other day has been overcast. This one was cloudy, too, but the sun got through anyway. As you can see. 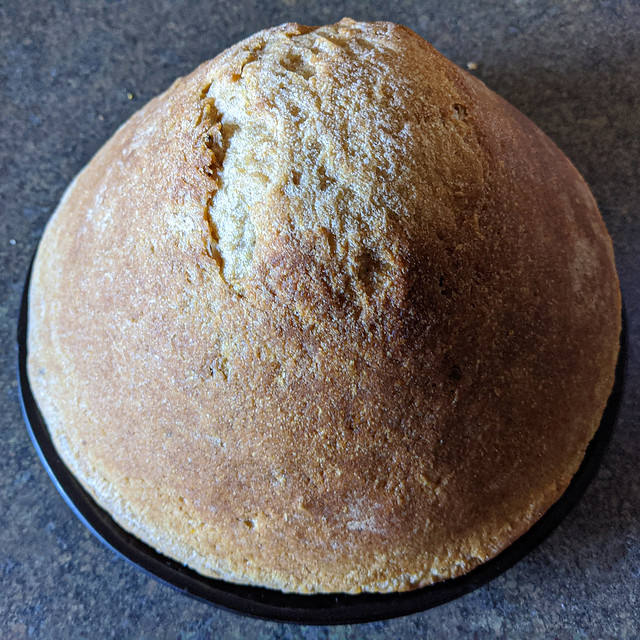 A few months ago, Seamus Blackley (who you might know as an engaging Twitter presence, oh and also the father of the XBox gaming console) started making bread using 4,500-year-old yeast scraped from ancient Egyptian pottery, and prepared as closely as possible to how it was made back in the old days (here’s a write-up about it in Eater, that’s worth reading for its own sake). At one point he offered to make a loaf for me — for the purposes of science, specifically, making a grilled cheese sandwich from the bread — and I of course accepted. He sent me a loaf via Fed Ex this weekend, and yesterday I got a notice through email that the package had been delivered. I went down from my office to retrieve it —

Which confused me. I don’t live somewhere that thieves can easily nab things from my porch, and usually my package notifications are accurate. Fed Ex packages don’t just not show up at my house. So I went online and discovered that not only did Fed Ex claim the package was delivered, it was, in fact, signed for. This was especially odd, since a) I was the only one home, and b) the Fed Ex person did not, as they usually did when something needed to be signed for, ring my doorbell to get my attention.

Then I looked to see who it was who signed for my package:

Oh, well, see. That was interesting.

I used Fed Ex’s online help to try to delve further into the issue. The Fed Ex automated response told me that the package had been left “at a guard shack or station,” which confused me further, as there was no guard shack or station I could think of. Bradford, my home town, doesn’t even have its own police force; we are serviced by the county sheriff’s office. I thought maybe this was the Fed Ex delivery person’s way of saying they left it in my mailbox (which is a distance from my house on a rural road), but when Krissy got the mail on her way home from work, there was no Fed Ex package. Could the package actually have been intercepted by the police?

Reader, it could and had! When I spoke to a live person at Fed Ex, I was informed that the person who signed for the package had left a number to call. I called it; it was for a detective with the Dayton Police, Dayton being the city the Fed Ex facility is in. I called the number a couple of times and left voice mail, to find out what had happened to my bread. 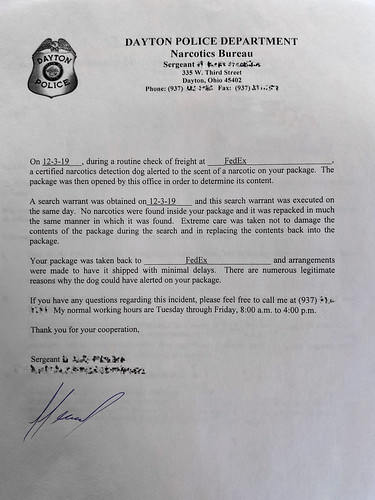 And then, about an hour ago, Fed Ex showed up and delivered a package. It was the bread. And with the bread, a note from the Narcotic Bureau of the Dayton Police Department, which began:

On 12-3-19, during a routine check of freight at Fed Ex, a certified narcotics detection dog alerted to the scent of a narcotic on your package. The package was then opened by this office in order to determine its content.

In addition to this letter from the police was a copy of the search warrant which was executed in order to open the package, and a copy of the police report about opening the package, in which the detective in question found… bread. And nothing else, because, really. It’s bread.  Seamus Blackley suspects that the coriander in the bread (which is historically accurate, incidentally) might have tripped up the dogs; I suspect it was the 4,500-year-old strain of yeast, or possibly the dogs working that line just going, holy shit I smell delicious bread and trying to get a slice. And who can blame those hard-working canines? Bread is yummy.

I will note I don’t think the police examining this package is an outrageous violation of my civil rights, especially since I now have it in my possession, without slices hacked off for “testing.” I do find it interesting that there clearly a certain number of people dim enough to send illicit narcotics through Fed Ex that drug sniffing dogs are needed. I also wonder how many false positives the dogs rack up, and how many baked (heh) goods are delayed a day or two thereby. I appreciate that there was an actual search warrant, signed off on by an actual judge and everything, along with a note saying “O hai we thought you might has the druqz but you dint, kthxbye.” It’s a nice bit of transparency about the process. That said, it’s… bread. Coriander or yeast or whatever else was the problem, it seems like it should make it through without delay.

In any event, it was quickly ascertained that the bread was not in fact heroin or cocaine or marijuana or whatever, at which point it was repackaged and sent along to me, a day late, sniffed by dogs and examined by humans, but otherwise unmolested. My plan is to saw off a slab of this felonious bread and make a nice ol’ felonious grilled cheese sandwich out of it. A happy ending to an exciting journey.

Update, 3:12pm: Got off the phone after a very pleasant conversation with the detective on this case, during which he detailed the process of examining my bread. I was pleased to learn that while it was taken out of the box, it wasn’t otherwise taken out of its packaging; it was x-rayed and then repacked. So if you ever have plans to bake a loaf around your contraband, well, maybe don’t do that (or, you know, send contraband through Fed Ex anyway, I mean, honestly, folks).

Update: monster-sized grilled cheese sandwiches were made with the felonious bread. They were friggin' delicious. pic.twitter.com/J5D2gSU0j5

The Whatever Holiday Gift Guide 2019 continues, and today we move away from books and focus on other gifts and crafts — which you can take to mean just about any other sort of thing a creative person might make: Music, art, knitting, jewelry, artisan foodstuffs and so on. These can be great, unique gifts for special folks in your life, and things you can’t just get down at the mall. I hope you see some cool stuff here.

Please note that the comment thread today is only for creators to post about their gifts for sale; please do not leave other comments, as they will be snipped out to keep the thread from getting cluttered. Thanks!

1. Creators (of things other than books) only. This is an intentionally expansive category, so if you’ve made something and have it available for the public to try or buy, you can probably post about in this thread. The exception to this is books (including comics and graphic novels), which have two previously existing threads, one for traditionally-published works and one for non-traditionally published works (Note: if you are an author and also create other stuff, you may promote that other stuff today). Don’t post if you are not the creator of the thing you want to promote, please.

2. Personally-created and completed works only. This thread is specifically for artists and creators who are making their own unique works. Mass-producible things like CDs, buttons or T-shirts are acceptable if you’ve personally created what’s on it. But please don’t use this thread for things that were created by others, which you happen to sell. Likewise, do not post about works in progress, even if you’re posting them publicly elsewhere. Remember that this is supposed to be a gift guide, and that these are things meant to be given to other people. Also, don’t just promote yourself unless you have something to sell or provide, that others may give as a gift.

3. One post per creator. In that post, you can list whatever creations of yours you like, but allow me to suggest you focus on your most recent creation. Note also that the majority of Whatever’s readership is in the US/Canada, so I suggest focusing on things available in North America.

4. Keep your description of your work brief (there will be a lot of posts, I’m guessing) and entertaining. Imagine the person is in front of you as you tell them about your work and is interested but easily distracted.

6. As noted above, comment posts that are not from creators promoting their work as specified above will be deleted, in order to keep the comment thread useful for people looking to find interesting work.

Now: Tell us about your stuff!