And Now, An Update on My Drumming 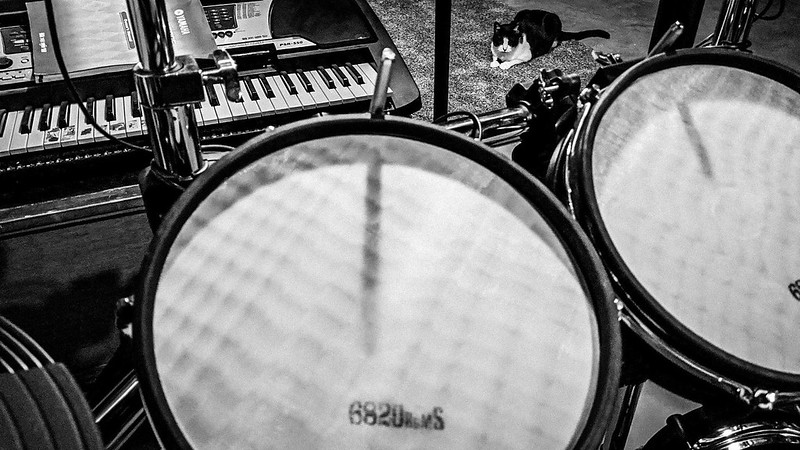 As you may remember, a week ago I got myself an electronic drum set, set it up and started pounding away on it. Here’s what I’ve learned from a week of getting back into the swing of it:

1. I still suck because I am unfathomably rusty, but after drumming roughly an hour a day for a week, I suck less than I did, and some things are coming back better than others. For example, I’m having no problem at all with syncopation, which has always been a strong suit of mine. On the other hand, I can play well or I can play really fast, but at the moment I can’t do both. Hopefully that will improve in time.

2. People have asked about how the cats are handling the drums and me playing it. Well, the picture above shows Zeus hanging out while I’m whacking away on the set. The secret: playing through headphones, so the only person who hears the mighty roaring sounds of the set is me; the cats hear drumsticks hitting mesh, which is very not loud at all. When I play the set through an amp, on the other hand, the cats are deeply offended.

3. At the moment I have a case of adhesive capsulitis going on in my left shoulder (more commonly known as “frozen shoulder”), which limits its mobility somewhat. I thought it might be a problem for playing the drum set, but it turns out it’s really not, and to the extent that I’m regularly exercising the shoulder at the current limit of its mobility, it might actually be helping to restore range. I can live with that.

4. Some folks have asked if I’m planning to put together a band or something. The answer is no, I bought the drumset for my own enjoyment and amusement. That being said, I have a plan to turn a part of my basement into a home music studio, of which the drum set will clearly be a part. Don’t worry, I’m not going to be giving up my day job. But that’s sort of the point; it’s nice to have a hobby.

5. And I am having fun! With that said — and here’s another reason an electronic set was the way to go — I’m playing the drums relatively quietly so that I don’t mess up my hearing. 50-year-old ears are not the same as 15-year-old ears, I have to say.

In all, I’m very happy to be thumping away again. Maybe someday I’ll actually be good! There’s more practice between me and that day, however.

20 Comments on “And Now, An Update on My Drumming”