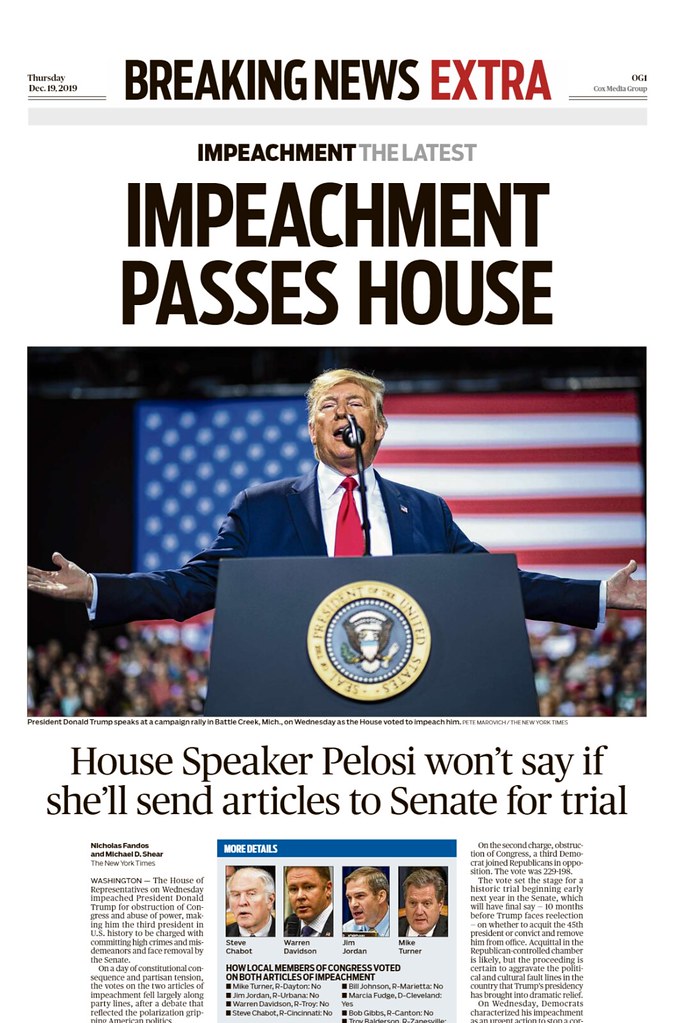 The front page of the Dayton Daily News today.

For the record, my thoughts on the president being impeached, because, oh, my, he certainly was:

* It was inevitable, not (just) because the Democrats were gunning for the president, but because Donald Trump is a crook and was one even before he came into office. Also he’s incompetent, and also he’s disdainful of any check to what he feels are his prerogatives as the president, whether or not they are legal or constitutional. When you have someone as president who treats the law as an inconvenient impediment to get around when it’s in the way of what he wants, and you have the House in the hands of the opposing political party, then yes, impeachment was never not going to happen.

* And yes, absolutely, the House Democrats were gunning for the president — because, let’s recap, he’s a crook, and an incompetent, and disdainful of the law. He’s a bad president, the worst since I’ve been alive, which takes some measure of doing, but more than that, he’s a malign president, and shitty human being, who never had any business in the White House in the first place. The question isn’t why the Democrats are gunning for him, but why removing a malign incompetent crook from the Presidency of the United States was not, in fact, a bipartisan effort.

* The answer to that, aside from mere partisanship, is that the GOP is in a dark place at the moment, politically and morally. It’s easy to say it’s in thrall to Trump and his shitty version of politics, but Trump is the symptom, not the disease. The disease is a heedless caucasian authoritarianism in thrall to the wealthy. Its initial vectors of the current infection were Lee Atwater and Newt Gingrich and folks like them, the ones who, when confronted with the chance to make even simple moral and political decisions in a manner that suggested comity and a concern for the general commonweal, asked “what if we… didn’t do that?” and proceeded from there. Trump is the culmination of decades of GOP planning to… well, evidently, to see what would happen if one of the major political parties of the United States simply decided that everyone who was making less than $250,000 a year could just go fuck themselves (that the majority of GOP supporters make far less than that is an irony that I’m sure the GOP quite enjoys).

Trump arrived on the scene too early for the grand GOP experiment — it would have preferred someone smoother and more tractable — but they’ve worked with what they have and here we are. The chance the GOP would interrupt their plans at this point to have a moment of moral clarity or concern about the national welfare was always pretty slim. If those are the facts on the ground, then of course it fell to the Democrats to handle the problem. One may argue, if one wishes, that they are imperfect messengers for this issue. But it’s not the Democrats’ fault that the GOP doesn’t want to hear the message at all.

* There’s no possible way Trump is actually removed from office by the Senate — Senate leader Mitch McConnell has already let it be known the fix is in and that the Senate Republicans will essentially run a sham trial in their chamber once it gets to them. But even if McConnell hadn’t already been so openly disdainful of the impeachment process, the idea that there would be 67 votes to remove even a malign incompetent crook like Trump in a chamber where the majority is held by the modern GOP is a fantasy. The GOP is fine with Trump as he is, doing what he’s doing. They know he’s a crook, but he’s a useful crook, and anyway it’s more important for them to stuff the Democrats than it is to remove the manifestly worst person in living memory to hold the office of president. How this is a surprise to anyone at this point is beyond me.

Which is a shame. It would be nice to live in a world where there was, in fact, bipartisan support for ridding our country of an awful president, who is also a criminal and has done criminal things. But that’s not where we are at the moment, and it’s not where the GOP has any plans to be anytime soon, and like the GOP we have to work with what we have. This may be why, mind you, Speaker of the House Nancy Pelosi is allegedly not in a rush to send the articles of impeachment over to the Senate; no point in getting stuffed early when there’s more work to do, and advantages to be gained.

* Nor do I expect anyone in the tank for Trump to be swayed by the impeachment process, because why would they? Once again, it’s not like Trump supporters didn’t know who their man was when they voted for him. They knew just fine, and were either willing to work with it or actually wanted those things about him. Moreover, there’s a certain tranche of people who are perfectly willing to accept, nay, celebrate, that their team lies and cheats as long as the wins pile up; it happens in sports and it happens in politics. There are a lot of Trump supporters who just like wins, and simply antagonizing people who dislike Trump counts as a “win.”

Likewise, Trump supporters (and GOP supporters generally) have been well-trained for years to distrust anyone, and any informational source, outside of particular approved sources, and the approved sources are — strangely enough! — spinning a very interesting alternate theory of the impeachment process. There is irony that those who rail the most about “fake news” are the ones who consume it the most frequently and uncritically. But, again, here we are in 2019 and we work with what we have.

As it happens, recent polls have seen an uptick in Trump’s approval ratings, and among other things, I suspect that has to do with some unengaged Trump supporters re-engaging because their boy is being attacked and their approved media sources are losing their minds about it. “Uptick” here is relative — in aggregate, the man is still nowhere near 50% approval, nor has he been at any point in his presidency — but it’s not ignorable either. Anyone who thought that the president being impeached would suddenly mean his approval rating dropping through the floor should think again. Trump supporters won’t be having any of that, and if you think they will, check in on your own biases and news sources.

* Of course, this is just going to make Trump more, well, Trump. The man has never understood why people wouldn’t just let him be king, and narcissists never react well to blows to the ego. If you think he’s lost his shit and been completely unreasonable before, just you wait. Things are going to get worse, much worse, especially if, in fact, Speaker Pelosi frustrates McConnell’s plan for a rubber-stamp acquittal in the Senate. And while there is some schadenfreude to be had with Trump spinning in tight, angry circles about this, at the end of the day he’s still president, he’s still a petty, vindictive little shit of a human, and he has enablers. Expect bad news from this dude. More than usual, I mean, and including directives and policies and proclamations that will energize his most bigoted and violent supporters.

* President Trump has been impeached, deserved to be impeached, and if we lived in a world that was just, would be removed from office. With that said, I’m not happy we’re at this point. In a better world, Trump wouldn’t have been elected or even have been the GOP candidate, but he was and he was, so the next best thing would have been that Trump, who was never going to be a good president, could have at least respected the office and its particular set of powers. There was little in his policies that he couldn’t have achieved without stepping outside the confines of the law, and he wouldn’t be in the position he’s in today, being only the third president to be impeached.

← The Big Idea: Matthew Hughes
I Can’t Promise I Will Never Be Problematic: A Twitter Thread →