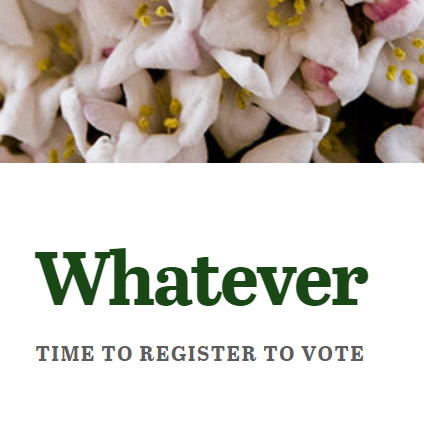 For the last few years, the subhead for Whatever has remained the same: “This Site Mocks Fascists.” I thought it was a good subhead, since it both set the tone for the site, and also, made people aware of the sort of person the proprietor of the site was. But now it’s 2020, an election year, and I think it’s time to retire that subhead and put up something else — something more aspirational, and dare I say, more important.

2020 is an election year in the United States, and in several states where the GOP holds a political majority in the state houses, there is a decided push to shove people off the voting rolls and to make voting generally more difficult, particularly for people who are not white and (heavy correlation, here) not likely to vote Republican. We could dive deep into why that is, but the short version is that here in 2020, the GOP is the party that caters to racist white people, and one of the ways the party catering to racist white people has decided to win elections in 2020 is to make it difficult for anyone who doesn’t vote with racist white people to cast their ballot.

Thus, the new Whatever subhead for 2020: “Time to Register to Vote.” Accompanying that subhead, a widget in the site sidebar, which shows up on every page of the site, encouraging adult US citizens to register and to check their registration, with links for both of those activities. Both the sidebar and the widget are up through Election Day, which is November 3, 2020. Beyond that I’ll be making it my personal mission to encourage every adult US citizen to register to vote, check their registration and then vote when they can. It’s good for them and good for the country.

(Along this line, I’ve also updated my Twitter bio with the links to register and to check one’s registration.)

Speaking of which: Hey, are you an adult US citizen? If you are, are you registered to vote? And if you are, have you checked your registration to make sure it’s still valid? Get on it, folks. I’ll be bugging you about it all year long.