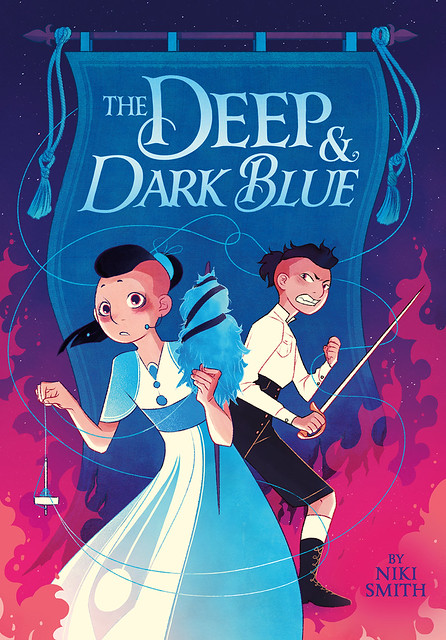 A life of adventure for some often involved pretending to be someone other than you were… but was it possible in some cases that what was being pretended was closer to who that person always was meant to be? It’s a thought that Niki Smith has considered for The Deep and Dark Blue.

So early next morning she softly arose,
and dressed herself up in her dead brother’s clothes,
She cut her hair close, and she stained her face brown,
And went for a soldier to fair London town.

As a kid, tales of girls chopping off their hair to have adventures as knights or soldiers were my first glimpse of the wider, queer world that was waiting for me.

Finding these stories was exhilarating. Legends of women who dressed as men to fight in battle go back to the Trojan War! Mulan disguised herself to take her father’s place. Shakespeare uses the trope in five separate plays, sometimes for hijinks, other times for adventure, always for drama. The stage was all-male profession: male actors playing women characters who disguise themselves as men, toying with and winning the hearts of other men… every layer was messier, more exciting. It was queer.

I was a preteen when Mulan was released and my copies of Tamora Pierce’s Alanna quartet were already dog-eared from rereading. The trope has only grown since then: Terry Pratchett, Scott Westerfeld, Bloody Jack, Voltron. Countless girls disguising themselves as boys to live the lives they always wanted, as knights and pirates and soldiers! My to-read list is constantly growing; I can’t resist a revisit to one of my favorite childhood tropes.

But in all the fun of blurring gender roles in those stories I devoured as a kid, in the legends and myths and fantastical adventures—those girls were always girls, deep down. A new life, an adopted name, shorn hair, yes, but living as a boy was always just a temporary facade. And despite the “gender bending”, the layers of queer undertones, the flirting (and often falling in love!) with boys while in disguise—each story ended with a firm return to life as a straight, cis girl. Even as a kid, I knew I wanted more.

And I wanted more in so many ways. The heroine of these stories was always that—a girl. Pretending to be a boy was the only way to have an adventure. No matter how exciting the fantasy world, no matter if there were dragons or swords or magic spells, a woman’s life was always tedious and full of boring needlework. It was something to escape.

Society calls old, unmarried women “spinsters”—why? Because they earned enough through their work spinning thread to support themselves independently. In a time when marriage was expected, their skills meant they were free to make that choice for themselves and maintain a life of self-sufficiency. When I sat down to write The Deep & Dark Blue, I knew I wanted to flip the trope of the girl who hates to do embroidery on its head. I developed a system of magic with its roots deep in “women’s work”, in fiber arts, textiles, spindles and weaving, all powered by a magical indigo dye. And watching over it, an enclave of women, the Communion of Blue, carefully passing down its secrets to a new generation of girls.

All of that led to The Deep and Dark Blue, my queer fantasy middle grade graphic novel. Two siblings on the run after a coup, seeking refuge with a mysterious order of women… but for one twin, changing her name isn’t a disguise. It’s the chance for a young trans girl to live as herself for the first time, surrounded by the magic she’s dreamed of for years.