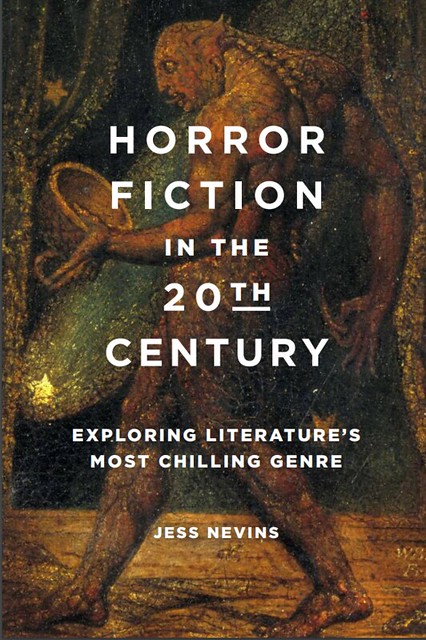 If you think you know the horror genre — or at least, you know the greats of the genre — then Jess Nevins has news for you: You’ve probably only scratched the bloody, screaming surface of a genre that goes back literally millennia. He’s here now to tell you what he uncovered while writing his latest book, Horror Fiction in the 20th Century.

Horror fiction—that is, fiction intended to frighten—is a peculiar beast. It’s as old as human popular culture—the Epic of Gilgamesh has horror elements, and the Epic is over 4,000 years old—but it’s held in low esteem by mainstream critics and readers. Horror fiction appears in every genre of literature, but attempts to create a precise definition of the horror genre have been surprisingly contentious affairs. The horror genre is universal, but what horror readers have traditionally seen is a fraction of what is out there.

It’s that latter point that struck me when I started writing Horror Fiction in the 20th Century and stuck with me throughout the book. I’ve been a horror reader all my life, but it wasn’t until I read Jessica Amanda Salmonson’s anthology, What Did Miss Darrington See? (1989), that I realized how much I’d been missing. Most of the stories in Miss Darrington are horror, written by women in the first half of the twentieth century. I was fascinated by the stories and went to the standard horror fiction reference books to learn more about the authors.

Those books were silent on these women or mentioned them only in passing. More rigorous attempts at research revealed two things: first, that there were a lot of women horror writers in the nineteenth and twentieth centuries, far more than I’d ever heard of; second, that these women were—through critical ignorance, happenstance, or deliberate action—written out of histories of the horror genre, despite the quality of the women’s work and their significance to the genre.

Discovering this vast array of ignored writers was like a spelunker squeezing through a tight crack in a cave wall and discovering a mammoth cave system, missing from all maps, stretching out for miles in every direction. My Big Idea was to explore the far reaches of the cave system and cover it all in detail—to write a history of the modern horror genre that included everyone important, not just the authors and works that appear in the standard histories.

Sometimes I have the outlines of a book firmly in my mind from the beginning, and can write the book within those outlines. Horror Fiction in the 20th Century wasn’t like that. Every cave I entered had further tunnels to crawl through. There were female authors of horror fiction to be considered, but also women who were known as mainstream writers but who occasionally dabbled in horror, with excellent results. African-American literature had its share of works of horror, as did Latinx literature, and Native American literature, and Australian Aboriginal literature, and LGBT literature, and all of those needed to be included. A number of the Gothic Romances of the 1960s and 1970s were written to frighten. I could not ignore horror fiction in comic books and roleplaying game fiction and Young Adult fiction. And there were many horror writers who produced sustained excellent work, but through no fault of their own are now completely forgotten. They, too, deserved a place in my book.

Most of all, there were the horror writers from outside the Anglophone world. Of whom there were many. So many, and so few translated into English. I realized that if I was going to write a history of the horror genre in the twentieth century, I would have to include horror writers from around the world, and not just those from the United States and the United Kingdom. A lot of intense research and difficult translations followed, but in the end I was able to include the major non-Anglophone horror writers and works in my book.

Reading all these new-to-me authors and works shaped my thinking about the horror genre itself and my reactions to the standard reference works on and histories of horror fiction. Too many of them, it seemed to me, relied on received wisdom and traditional judgments to guide who would be included in the encyclopedias and histories and who would be excluded. Viewed from a twenty-first century perspective, the results were problematic: too many mediocre white male horror writers; too much space devoted to English-language horror; too much repetition of received wisdom; too much rejection of new understandings of gender, sexuality, and race; too much regurgitation of tired and discredited ideologies and biases.

I didn’t set out to write a revisionist history of horror fiction, but in some respects that’s how Horror Fiction in the 20th Century turned out. I do pay due homage to the generally-accepted greats in the genre, from Algernon Blackwood to Thomas Ligotti. But what I also do is devote significant attention to overlooked, underserved, and ignored authors, and point out where traditional critical narratives about horror fiction are misguided or incorrect. For example, I argue that H.P. Lovecraft was a popularizer more than an innovator, and the inheritor of a tradition rather than a writer without precedent. This is a revisionist argument—but one that is based on facts, inasmuch as this kind of argument can be based on facts.

The Big Idea for Horror Fiction in the 20th Century was to write a truly global history of horror, and what I hope readers take away from my book is an appreciation for the wonderful variety of the horror literature of the world. The American and English horror authors we know so well—the Ambrose Bierces and Richard Mathesons and Robert Aickmans and Caitlin Kiernans—are very good. But so are Silvina Ocampo and Jehanne Jean-Charles and Dino Buzzati and Ge Fui and Mieko Kanai. The horror genre isn’t Anglophone, isn’t something only men read and write, and isn’t limited to hoary tropes, motifs, and plot dynamics. The horror genre is global, nimble—and glorious.