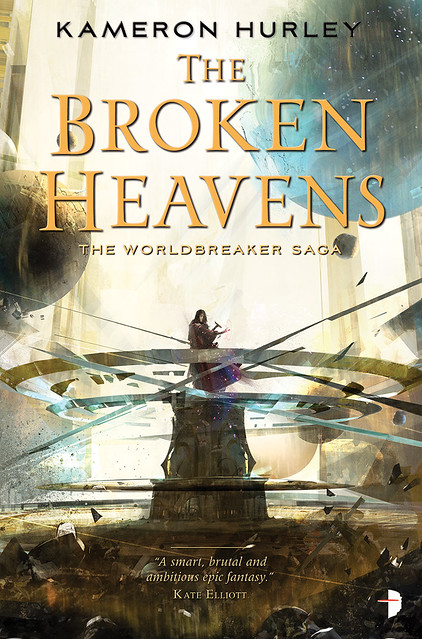 For this Big Idea, Kameron Hurley looks at what it takes to get a book right — and how her latest novel, The Broken Heavens, had to look beyond binary expectations to get there.

Two choices: Left or right. This or that.

Choose one or the other. There’s no in-between. No other choices.

From the time we are small we learn that we have choices: yes, or no. Good, or bad. The idea that there are only two choices has become pervasive in our media, our politics, our relationships, and it’s divided us deeply here in the U.S.

When I began writing my Worldbreaker Saga back in 2012, which begins with the novel The Mirror Empire, I too was obsessed with this idea of two choices: the light and the dark. I was writing fantasy, after all! While my protagonists might be morally messy early on, I always knew I was headed for a showdown where they had two choices: good or evil. Genocidal or self-sacrificing.

But it was a false choice.

And it literally took me years to realize this.

At some level I must have understood I was setting up a false choice as I finished the second volume, Empire Ascendant, and began the grueling process of tying everything up in the third and final book, The Broken Heavens. Emotionally, I was rebelling against my own embrace of these false choices, because no matter how many times I tried to get myself to write the ending I had in mind at the beginning of the series, it just never felt… right.

It took writing 90,000 words of… something for my agent to finally call me out. “Frankly, this isn’t very good,” she said. “Let’s take this out of the schedule and have you work on something else.”

I was incredibly angry with her, at first. Angry because she had identified in the writing the fact that I was deeply unhappy with the choices I had waiting for my protagonists, and I had absolutely no idea how to fix it.

Fixing issues this big, things that are so deeply ingrained in you that you have trouble thinking outside of the false paradigm, can take time.

I needed the time.

After the US election, I took a fresh look at the book and wondered if my work was contributing to this narrative of two choices; this idea that all we ever got to choose from were a range of bad alternatives forced on us by powers far larger than ourselves. How was that inspiring? Impactful? Hopeful?

The idea that we only have two choices is a very western, and honestly fairly recent, phenomenon. It’s a fallacy promoted by media for clicks, by political parties for votes, by foreign and domestic forces who want to ensure we remain angry and divided and nihilistic.

The truth is we have an infinite number of choices. Tradition, politicians, friends, family, social mores, will tell you it’s not true, but that’s because thinking outside of those choices is dangerous to the status quo. It upends assumptions about the way the world could and should be.

And in this series, I absolutely wanted to upend the world.

It took a lot of angry writing on my part. Long, long email back-and-forths with my agent, until she suggested I start thinking in another way. What if I stopped focusing on breaking things apart, and instead focused on bringing things together?

And there it was.

While the rest of the book writing process was not smooth – I still did a tremendous amount of revision of the first third of the book, even after turning it over to my editor – the ending finally worked.  It was true to the world, the characters, the lore, the journey, from The Mirror Empire through Empire Ascendant and now, here, at the end: The Broken Heavens.

I am immensely proud of finishing this book. More so, I am proud that I took the time and didn’t do the lazy, expected thing with how I finished it up.

A fellow writer, Tobias Buckell, once paraphrased some advice from Tim Powers, which went something like this:

No one will remember if a good book was late. And a good book will only be late once. But a bad book? A bad book is bad forever.

I took the time to make The Broken Heavens a good, satisfying story. And it’s made all the difference.