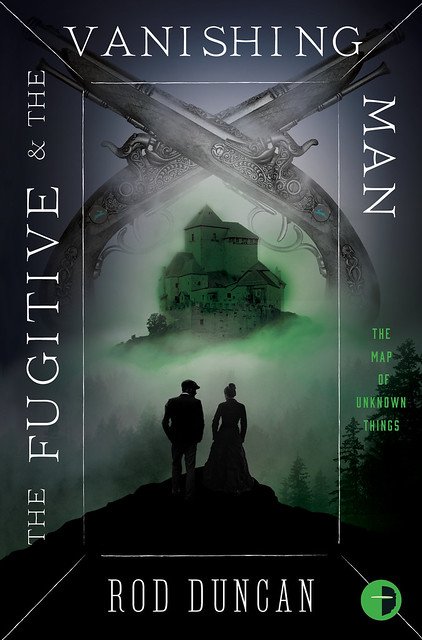 When it came to writing novels, Rod Duncan discovered that it helped for him to get out of his own head, and to take a chance on a character outside of his own personal experience. That character has since taken him places, including to his newest novel, The Fugitive and the Vanishing Man.

My first four attempts at novel writing were driven by male protagonists. They earned me a drawer full of polite rejection letters from publishers and literary agents. It was a female protagonist that finally won me the long-sought book deal.

The commissioning editor later told me that she’d been sceptical. Could a male author really manage a first-person female voice? But some small observation early in the book convinced her. From there to the end of the manuscript she turned the pages with confidence, seeing each thought or action of the protagonist not as proof of gender identity, but as evidence of an individual character.

In the Alien screenplay, Ripley was an individual who could have been man or woman. It was only with the casting of Sigourney Weaver that she became female. Why should that surprise us? Unless we believe that each character is required to represent an entire gender.

Films have casting directors, costume designers, make-up artists, actors. But with novels, the readers get to do all those jobs. This is where the magic comes in. Through the creative act of reading, we translate words on a page to pictures in our minds. Much of the impression we get of a character’s gender will be unconsciously constructed. Write a good character and, if your audience believes they are male or female, that’s exactly what they will see.

There are surely differences between men and women. But how much of the difference derives from the asymmetric experiences imposed by society? How much is genetically defined? And what portion of the genetic difference resides in secondary sexual characteristics as opposed to the workings of the brain? In whatever way we answer those questions, the moment we say ‘A woman would never do that’ we are making a sexist assumption. There is at least as much variation of character within the genders as between them.

Some years after my first publishing contract was over, I found myself writing a short story from a male perspective. A private investigator walked a gas-lit street in an alternate history, approaching a dangerous rendezvous. But later, our handsome protagonist needed to disappear. I was taken aback when he removed a disguise and revealed himself to be a woman.

I’d wonder later whether this unconscious reverting to a female voice was in some way an exploration of a more female side of my own personality. Conversely, I might be more comfortable writing female characters because they are more obviously not me. Thus they emerge with more interesting personalities.

Either way, the detective, whose name I discovered was Elizabeth, had a distinctive voice, and was insistent on using it to tell me her story, which grew into a novel, The Bullet-Catcher’s Daughter, and then into a trilogy, the Fall of the Gas-Lit Empire.

To my surprise, people started telling me that they had fallen in love with Elizabeth. She was strong without being a superhero, they said. And she was apparently so truly feminine that one reviewer questioned whether the author could really be a man. As before, I believe the gender people perceived was largely their own construction.

There are a few tricks, of course – the smoke and mirrors that all writers employ. The places the eye of the description comes to rest. The saying enough, but not too much. Leaving room for the audience. I believe the reason Elizabeth seems female to some female readers, is because they are doing the heavy lifting, creatively speaking.

Not that Elizabeth feels comfortable in the role that the fictional society of my alternate history allows her. She must pass as male to do many of the things she wants to do. But adopting either role, she finds herself modifying the shape of her body. Which distortion is more unnatural, she asks: the binding cloth that flattens her breasts or the corset that thins her waist?

Elizabeth’s second trilogy began with The Queen of All Crows. In this series of adventures, she encounters societies where the role of men and women are very different. It forces her to think about her own relationship with gender. Neither of the available roles has allowed her to be fully at peace with herself.

Reviewers have explored various interpretations of Elizabeth. To some she is a woman reacting to the oppression of a patriarchal society. To others she is obviously non-binary. But within her society, this discourse does not exist. These terms would be unfamiliar to her. Is gender a social construction? How deep do the privileges run for those assigned male at birth? Elizabeth has never been confronted with such questions. She approaches the issue from experience and observation rather than ideology.

Even when dressed as a man, she does not doubt her womanhood – though both presentations feel to her like disguises. Perhaps her discomfort comes from the rigidity of those two roles. Or perhaps she would experience a dysphoria in any society, however the genders were understood. Either way, these are not questions she is at first equipped to ask.

The title of this trilogy, The Map of Unknown Things, hints at the nature of Elizabeth’s inner quest. She is exploring a landscape that has yet to be pinned down with the names of ideologies or social movements. But in whatever way we understand Elizabeth’s relationship to gender, it is clear that she finds herself out of step with the world.

The Fugitive and the Vanishing Man is the final book in the trilogy. The tides of history are carrying the world towards war. Elizabeth finds herself working behind the scenes to prevent the disaster. In the wilds of the Oregon territory, she meets someone assigned male at birth but who identifies as neither male nor female. The encounter is like a mirror for Elizabeth, enabling her to understand something of her own nature. She will never be the woman that society demands. Nor can she properly fulfil its ideal of the masculine role. But perhaps she will at last find a way to understand herself.

← Hey, Guess Who Will Be Going to Dragon Con This Year?
The Last Emperox Gets a Starred Review in Publishers Weekly →