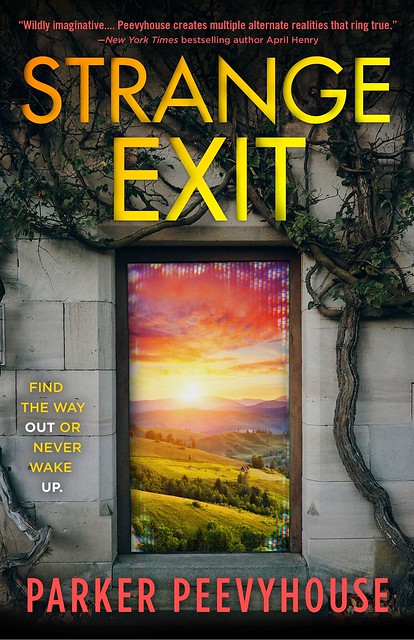 At first blush, the ability to do anything sounds like a great idea. But there are reasons that it wouldn’t be… especially when you’re writing a novel. Parker Peevyhouse explains why, and how reining it all in made a difference for Strange Exit.

When you live in a simulation, anything is possible. But what makes for a good story is limitations.

In early drafts of my new novel, Strange Exit, characters could manipulate their surroundings at will—more so as they came to realize that they were inside in a simulation. Objects would fly, doors would slam. On the surface, it was exciting. But it cut a lot of the tension. If characters can do anything, then what’s to stop them from overcoming any obstacle they meet?

My editor encouraged me to develop more specific rules for my simulation. At first, I struggled to find inspiration. A set of arbitrary rules didn’t seem interesting to me. I thought about some of my favorite movies, like The Matrix and Inception, and realized that the rules in each of those movies (and there are so many rules in Inception!) arose specifically from the way those simulations were designed to be used. More importantly, those rules begged to be manipulated, even while they couldn’t be broken.

In Strange Exit, the sim is supposed to help people adjust to life after nuclear winter. Instead, people keep using it to recreate buildings and neighborhoods that they feel safe in—places to hide from more nuclear attacks or just from anxiety over what they’ve lost in the war. I decided that my first rule would be that characters could only manipulate environments that they had personally created within the sim. So when our main character, Lake, enters a pocket of the sim someone else has created, she’s at a disadvantage. They can make walls grow around her, or firestorms chase her away, and she can’t match that power. They can make every rack in their convenience store sell only Spicy Hot Cheetos and she has to compromise her snacking integrity or go hungry.

Another rule I introduced: when a person leaves the simulation, any pockets they’ve created vanish and anyone who’s inside those pockets wakes from the sim. So every time Lake manages to convince someone to leave the sim, she shrinks the unwieldy program and takes some of the pressure off the failing system. And when Lake finds a partner, Taren, and teaches him this rule, he finds a way to manipulate it further: he creates a pocket in the sim and convinces people to step inside so that when he leaves the sim, they all leave too. Their pockets close, the sim shrinks, and pressure lifts from the life support systems that are on the brink of failing.

Settling on these rules gave me a new vision for the story. I decided to focus on Lake’s training Taren to wake the “sleepers” and clear the sim. Even as Lake teaches Taren her methods, he finds his own way to shrink the sim. The rules of the sim force the characters to be clever and innovative. But more than that, the rules force them to make choices that put them at odds with each other. Soon, their methods diverge so much that they no longer see eye to eye. Taren starts making risky choices that put people in danger, and Lake focuses on efforts that they have too little time to explore. Finally, the two are pitted against each other, more enemies than friends.

Without a clear set of rules for the simulation, the tension between Lake and Taren wouldn’t exist. As the story stands now, their differing visions are what give the story meaning. The sim makes many things possible—odd happenings, and deep explorations of anxieties around nuclear warfare. But the rules that limit the sim force the characters to make difficult choices that reveal the core of who they are and what they believe. It’s the same with any story set in a simulation: we marvel at how characters break the laws of physics, but we care most about how they respond to rules they can’t break—only bend.

← The Last Emperox Gets a Starred Review in Publishers Weekly
The Big Idea: Simon Jimenez →