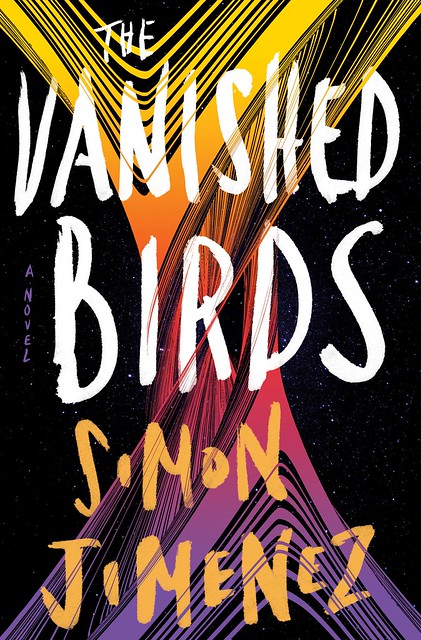 When you have a big idea for a story, the question then often becomes — what practical things do I need to do to make this big idea work for the story? For The Vanished Birds, author Simon Jimenez had his big idea, and now in the Big Idea piece, he explains how he made it work, in the context of his novel.

I wrote no encyclopedia and I drew no map before I began writing The Vanished Birds. I laid the track as the train chugged forward and hoped I wouldn’t be outpaced and run over. Of course I was. I wince now as I think back on all the soft resets and double-backs and total rethinks and rewrites I had to do. I’d blame this all on the fact that it was my first book and I didn’t know what I was doing, but that wouldn’t be the truth. This is how I tend to go about all things. Without a plan and screaming in freefall.

The Big Idea of The Vanished Birds came into being as I wrote that first chapter. It’s something of a short story, a completed loop that tells the story of an entire life, structured in a way similar to other time-travel or future tense long-distance relationships, where the pairing has two unequal perceptions of time. The Time Traveler’s Wife. Any Moffat-written Doctor Who episode. Two people in a, well, call it long-distance fling. One is planet-bound and he experiences time as we do, and the other is perpetually traveling between the stars for work, and because of this, she has a very different experience of time.

For her, or for that matter any traveler engaging in long-distance spaceflight in this fiction, time is squeezed short. Her months are his years. She ends up rock-skipping across his entire life, meeting once every fifteen years.

He gets older, she does not.

As I wrote the contours of their decades-long relationship, all I knew—all I needed to know to tell this short story about this farmer’s life and his relationship to the spacefaring woman—was that interstellar travel had a cost of time. This formed the emotional spine that I wanted the rest of the novel to be built on, as it spoke to all the fascinations and fears I was preoccupied with at the time (and still am). The romance and loneliness of travel, and the delusion of leaving it all behind. The anxieties of unequal love. Ageing and obsolescence. I wanted the world-building to reflect some aspect of these preoccupations, the rules of the “game” serving to heighten these dramas, all of it borne of necessity.

The two lovers meet once every fifteen years not because that’s the way the tech works and how the math shook out refer to the wiki page please, but because fifteen years felt like a good rising increment when dramatizing the man’s entire life. You get the big spikes of youth and adolescence and the middle passages. And since I didn’t want her to get markedly older during this relationship (both to juxtapose the increasing difference of their age, and to keep in mind that in the scope of the larger narrative of the novel, this is for her just a brief dalliance), her round-trip journeys couldn’t be more than a few months, her time. This proportion of spent time doesn’t align with any real-world laws—as far as I’m aware at least—which meant I had to push toward the fantastical to justify this reality.

And so I began to whittle out the shape of a Big Idea: Pocket Space, the extra-dimensional arena by which interstellar travel is possible.

Space flight and unequal time. There were hundreds of tried and true options I could draw from considering all the fiction that had come before me. Spool an engine and fold space like a napkin. Fly down the frictionless blue-light highways of hyperspace, with no cost of resource or time. Or be adherent to the laws of spacetime as we understand it today and take your cues from reality. The latter half of Dan Simmons’ Hyperion Cantos runs right through the wall of FTL in a particularly memorable way. Travelers are vaporized by the speed of the jump as they move from one point in the galaxy to another, blood and viscera sloshing in their pods, dead as dead can be, until they are slowly, painfully, resurrected. Death then but a necessary evil, to get to where they need to be. I think you can go two ways about it: be stridently authentic or make it all as easy as winking with both eyes. And the further the story takes place from the present day, the more allowance is afforded the improbability of your space magicks or technobabble.

There’s no wrong answer here; it all depends on what kind of story you are telling. If you’re writing a light adventure narrative that takes place across many varied ecosystems in Star Wars-esque style, you probably don’t need to go too in depth about the hyperdrive that flicks the ship across the galaxy. But if your story is directly concerned with the mode of travel people engage in in the future, then that mode of travel will need to have a certain amount of friction and personal/societal cost in order to be relevant to the characters’ arcs and to actually investigate the topic at hand. After all, the believability of a world is directly proportional to the cost of living in that world, for we are justly wary of utopias.

I took a bit from many different sources. My initial plan was to have every journey through Pocket Space adhere to the first ratio I set up, of her months to his years. But as I tunneled further into the book and discovered the other stories I wanted to tell, I realized two things: that A) I needed Pocket Space to be somewhat elastic in its ruleset to allow for different stories about time, and B) I needed Pocket Space to be somewhat fleshed out, and not an afterthought, since it was starting to have greater and greater prominence in the story. There was also the question of coherency and what the reader was understanding about this future-tense travel; not just cursory understanding, but real, gut feeling understanding of the cost of it, the difference between being told how heavy a rock is, and actually holding it in your hands.

I needed the concept to be concrete. For it to have texture and variability and immediate parse-ability when it came to the emotional needs of the story, so people weren’t confused who was where and when and how. To make it more intuitive to the reader I drew comparisons between the Pocket and our oceans. I’m certainly not the first to make links to the ocean and some aspect of outer space, and for good reason. It felt like the most apt link to make, considering the tone and direction the story was taking, of journeying through a frontier space amidst a corporate legacy of expansionism. Gradually the Pocket more and more resembled the old-fashioned maps that charted shipping routes and known currents. Currents, all with their own speeds, their own ratios for time-loss, their own beguiling names. And since there were currents, there were now favored shipping and travel routes. This in turn suggested ideas of galactic control. What systems lay along the quickest currents and what trade routes and what resources were waiting for extraction. The rest followed from there.

That all sounds very tidy, like the ideas had flowed easily along a single current, but the truth is I actually can’t remember where any of it really came from. Everything I wrote here is just self-justifying reasoning developed with the benefit of hindsight. At a certain point it becomes hard to know the origin of any one idea, or the reason why the thing is the thing and not some other thing. The act of writing a self-referential feedback loop of drafting, observation, and re-drafting, the Big Idea born from a thousand small and impossible to remember decisions. I settled on the name Pocket Space because it is simple and easy to remember and, more importantly, the name immediately suggested to me what it was; it didn’t hide its definition behind some impossible to remember made-up term. And I liked the slight contradiction of the smallness of the pocket and the bigness of space; that the mind can’t quite wrangle it.

This is the fun part, the inventing. The part that feels like play. You write of a ship unfolding out of the Pocket, exiting the strong current that it had for months been riding and the action suggests something tactile and strange. Maybe a black substance like tar dripping off the sails of the ship at port. And you wonder what that substance is and its properties, which in turn propagates other ideas about the world. You start asking yourself who the first person was to sail this black ocean and where those uncharted currents finally brought them. What unexpected end. If they were satisfied by this journey, regardless of how they did it, and how long it took. And maybe one day you’ll realize why you do not write with a plan. How the work has always been about you.