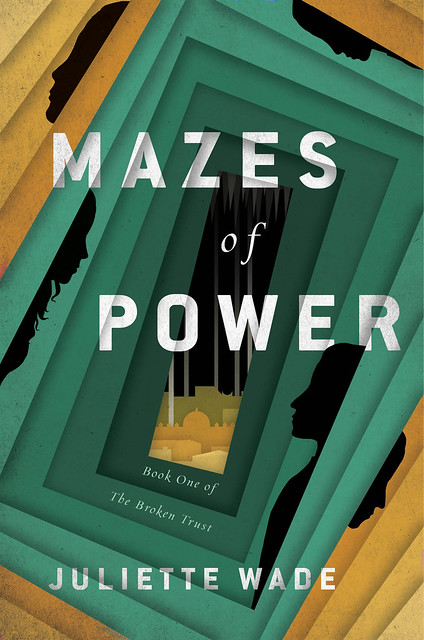 The paths we walk in our lives are not necessarily straight and narrow, and in writing her new novel, author Juliette Wade found she needed another metaphor entirely to explain her character’s movements. In this Big Idea, Wade explains on why the metaphor she landed on was Mazes of Power.

This is the story of a very old, and very big idea. When I first had it, I was thirteen years old, and the idea was so big that I couldn’t even wrap my mind around it. It was the idea for a world of cavern cities, where families were restricted in their professions, and about conflicts of power… but until I’d turned this idea over hundreds of times, over years, it always seemed out of my grasp. I learned about anthropology, and added a new social awareness to my idea, and realized it was for a work of sociological science fiction. I studied linguistics, and added that, too. I tried to write a story about it, knew it was wrong, and learned more, and wrote it again. I concentrated hard on learning how language and the world around us reflect our concepts of our social selves, and wrote it again.

Until it stopped being wrong, and became the world of Varin.

Varin has a caste system. This caste system has seven levels. It’s easy to think of such a system as a set of boxes, and to think that nobles go in one box, soldiers and police in another, servants in another, then artisans, laborers, merchants, and undercaste. But there came a point when I realized these were not boxes. In a real social system, all kinds of people are born into categories where they don’t necessarily fit. While they may be taught who they are, what their values are, and what they are supposed to be like, often, they struggle. People at every level will make bargains between their personal truths and the demands of society. They will use what power they can wrest from the world around them to achieve their ends. They will make the choices that become available to them.

Societal categories like these are not boxes. They are mazes.

What are the key properties of a maze? A maze is complex. It offers paths, but the pattern of these paths is difficult to see while you are moving through it. It appears to offer you choices, but at the same time, limits the choices you can productively make if you wish to achieve a particular goal.

There are three mazes in Mazes of Power.

The first maze is the competition for Heir to the Throne of Varin. Twelve boys enter, one from each of the Great Families of the Grobal nobility. Each travels a path through public events, interviews, deals, trials, and assassination attempts, trying to reach the center where only one may stand.

The second maze is the tangle of servants’ hallways that run behind the walls of the Eminence’s Residence. Imbati-caste servants, who must not hurry in the public halls where nobles might see them, are allowed to run there. They know the fastest ways from place to place, and they use speakers to listen in on the talk in public rooms, to know when to appear when they are needed, or to learn secrets no one realizes they possess.

The third maze is the society itself. Every person in Varin is born into a path they cannot see, and cannot choose. Some of those paths run through public places, and others through hidden places. Within these paths, the people of Varin make choices, as we make choices, but the choices they make are limited by the larger structure of the society around them. Expectations are set and reinforced, and there are consequences for breaking them. No person, no setting, no interaction exists outside this system. Nothing is untouched.

If you are a Varini, this structure limits you, but it also protects you, because it tells you who you should expect to see in the street, in the marketplace, or at the radiograph office. It tells you what you should say to a person with a green lower lip who wears a gray coat, or to a woman in rust-red, or to a man with a black tattoo on his forehead. It keeps you safe and holds you up, but it also restricts you and presses you down.

Varin was designed to be unlike our world in a great many ways, and to break our Earthly expectations, but it should feel very familiar.

After all, we all walk within mazes of power.