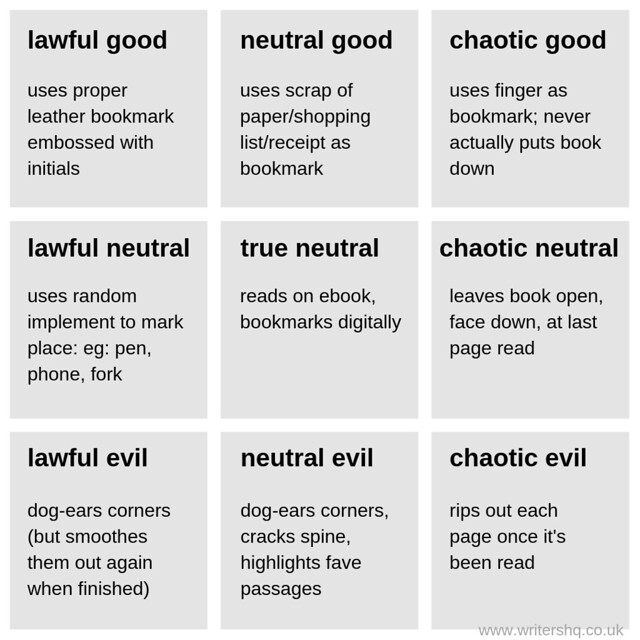 Late last month writer Alex Christofi posted a tweet about how he would physically cut long books in half to make them more “portable,” thus revealing himself as history’s worst monster, and also, starting up an internet conversation about how people treat their books. This has lead Slate to reprint an essay by Anne Fadiman about how people love their books — either in a “courtly” fashion (i.e., treating them respect and sometimes reverence) or in a “carnal” fashion (i.e., they’re physical objects meant to be used, so use them, up to and including dog earing them, cracking their spines or even slicing them in half). I’ve never come across this essay before, but I had a complex response to it when I read it, so I want to talk about it a little bit.

The first thing I should note is that I am heavily — heavily — in the camp that treats books carefully, if not actually “reverently.” I think books are practical things, meant to be used; if I buy one for myself, it’s because I’m going to open it up and read it, and I’m not going to worry too much if while reading it I ding a corner or fox a cover or whatever. At the same time, if I’ve purchased a book, I intend to keep it, and I’m going to treat it well, to the point that I suspect that for many people who look at the books I’ve had for years, they might suspect that I haven’t opened them up at all. I have. I’m just… careful.

You might think this is because I’m a writer myself, but that isn’t it, not exactly. It’s more to do with being a reader, and my own personal background. I grew up poor and had a lot of books that came to me secondhand and in various states of repair, so I learned early on that if I didn’t want a book to fall apart on me, I had to be careful with it. Likewise, most of my books were paperbacks, whose durability was easily compromised if one was not careful. The books that weren’t mine were usually library books, which I also treated carefully lest I incur the wrath of a librarian. Finally — look, they’re books. Books did amazing things and told you cool stuff. They deserved not to be treated like crap. All of this went into the pot with regard to how I formed my physical relationship with books.

This is why, if you ever see a paperback I own, it looks, if not pristine, at least very well kept. None of my paperbacks have broken spines (unless they came to me already broken) or dogeared pages, and very few have creased covers. College textbooks I’ve kept are unmarked with notes; I would have dorm mates ask to borrow my books, convinced they would chock full of useful highlights and margin notes, and were confused and I suspect in a couple of cases actually offended when neither of those were on the pages. My hardcovers are likewise generally mar-and-mark free. Again, if I drop or bump a book while I’m reading it and it gets a crease or smudge on it, I’m not going to freak out; it’s a book and it’s meant to be used and things like that happen. But there’s a difference between wear and tear happening because you’re using a material object as intended, and wear and tear happening because you’re going out of your way to damage the object.

Which brings us back to Fadiman’s essay, where she talks about people tearing, marking, and even physically destroying books as they consume the words inside them, not because they are (to their mind) disrespecting the book, but rather they are using the book as they see it ought to be used, and their relationship to the book and its permanence is different. If you consider a paperback as cheap and eminently disposable, for example, what does it matter if you rip out the chapters as you go along? It’s just a paperback book. If you want to re-read the book later, you can just get another cheap paperback copy. Likewise dogearing, highlighting, cracking spines and all the other things people do to their books — far less dramatic than physically tearing the book apart, but still.

And… I guess? I should be very clear that you should treat your own books as you will, and I will absolutely not judge you for it: At signings people come up to me with worn books and apologize for them even as they ask me to sign them, and I tell them, sincerely, that I am never offended by a well-loved book. It’s not disrespectful to read a book so much it falls apart; pretty much the opposite, really. But I literally don’t think I could get one of my own books to that particular state of repair. I don’t know that I have it in me to let a book get to that point — much less intentionally and with forethought take a book and slice it in half, just to make it easier to carry around. I just cannot even imagine doing that. To be any more alien to my own mindset, you’d probably have to be from Mars.

(And if you do terrible things to books that are not your own… well. Many years ago, a friend noted I had two unmarred paperback copies of the novelization of the movie Stargate, and after mocking me for having them at all (I had gotten one of them as part of the press pack for the movie junket; I have no idea where the other had come from) he took one of them and cracked its spine. And yes, it was a duplicate, and yes, it wasn’t the greatest novel ever written, and yes, this person is an otherwise kind and decent person who lives a good life and is kind to pets and children. Nevertheless it is forever a black mark in the annals of their life and I will judge them for it until the heat death of the universe, so there.)

I don’t have any great insights to offer here other than to note that Fadiman’s distinction between courtly and carnal book lovers has caused me to consider that people who mangle their books might not love those books (or the ideas in them) any less than I do, which is an idea that makes me intensely uncomfortable because you just don’t do that to books damn it. But I guess some people do. I don’t understand it. I can’t endorse it. The best I can do is almost unwillingly begrudge that she may — may — have a point. And I hate it.

← Smudge Had a Rough Night
The Big Idea: Jim Ottaviani →