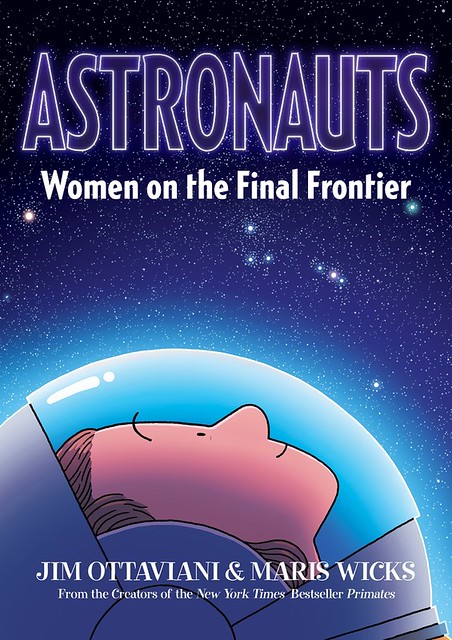 Sometimes storytellers miss out on telling a story. But as Jim Ottaviani and Maris Wicks learned with Astronauts: Women on the Final Frontier, that just means that some stories, you get to come back to.

Astronauts started on the cutting room floor of another book. More than ten years ago I wrote a graphic novel about the 1960s space race. In the course of doing research for that book (T-Minus), I came across the story of thirteen women pilots who took — and passed — the rigorous physical tests NASA gave the first astronaut candidates that made you shudder and cringe when you watched The Right Stuff.

We all know what didn’t happen next, and I know a good story when I stumble over it, but with only 124 pages to get readers from the dawn of rocketry to landing on the Moon I couldn’t fit that story into that first book.

This happens all the time, and I’ve learned over the years to not just wipe a tear of regret from the corner of my eye and move on. I set the story aside, knowing I would come back to it. And here we are!

But I don’t think having more than a dozen main characters works well outside of sprawling, multi-volume fantasy or science fiction epics, and besides, the Mercury 13 are only the beginning of this chapter of the Space Age. So when I came back to it I needed to find a focal character, and I decided that it should be somebody that wasn’t famous.

Not that Sally Ride’s story isn’t great. It is. So is Valentina Tereshkova’s. (Not to mention the bit where Star Trek’s Nichelle Nichols, who appears in the book as well, plays a key role in NASA’s astronaut recruitment.) But the more I thought about it, the more I realized how much more fun it is to discover someone new, and that the story itself would work better for me — and you, I hope! — if I made the famous people supporting characters.

Because that’s how real life is for most of us.

How to find her, though? Well, the great thing about NASA is they document everything, so I got to spend weeks pretending to work while really I was just having a ball reading oral histories of women astronauts, looking for someone who both witnessed and made history. And hey, if I ran across a person who sounded like they’d be fun to meet, that’d be a bonus. I did, and her name is Mary Cleave.

She’s been to space! She’s been the boss of NASA’s science directorate, deciding which robots go to space! She has a great sense of humor, which comes through even when interviewed by a deadpan and serious historian! So I started learning more, and working up the nerve to contact her directly. I eventually got her on the phone to pitch her the idea of doing a comic book about her, her colleagues, and doing in science in space.

Over the years people have asked me about that “comics about science” thing a lot, but there’s one group that never questions the idea. That’s people like Mary — the scientists and engineers themselves. They think and communicate visually, so they get it. What a lot of them don’t get (Stephen Hawking was an exception) is why I’d want to write about them in the first place, and why it takes me weeks to draft the initial letter asking them if they’d be interested. Mary was the same: When Maris and I went to visit she couldn’t figure out why everyone’s so impressed by meeting astronauts, or why we thought it was weird to have one offer to pick you up at the airport. “We’re just regular people!”

Well. Sorry, but I don’t buy that. Astronauts are competent and accomplished to a degree you and I can barely even imagine. But still, there’s something to what she said, since the famous and not-so-famous astronauts I’ve been lucky enough to meet are indeed people you can just talk to. Hang out with. Maybe even join at a pub where George Washington and Ben Franklin talked and hung out and had beers, and have some yourselves.

I didn’t have a beer during our first visit with Mary (I was driving) but next time? Heck yeah. And in the meantime Maris and I got to make a book with an astronaut, and maybe help make Mary Cleave a little more famous.