Meanwhile, In Range of Motion News 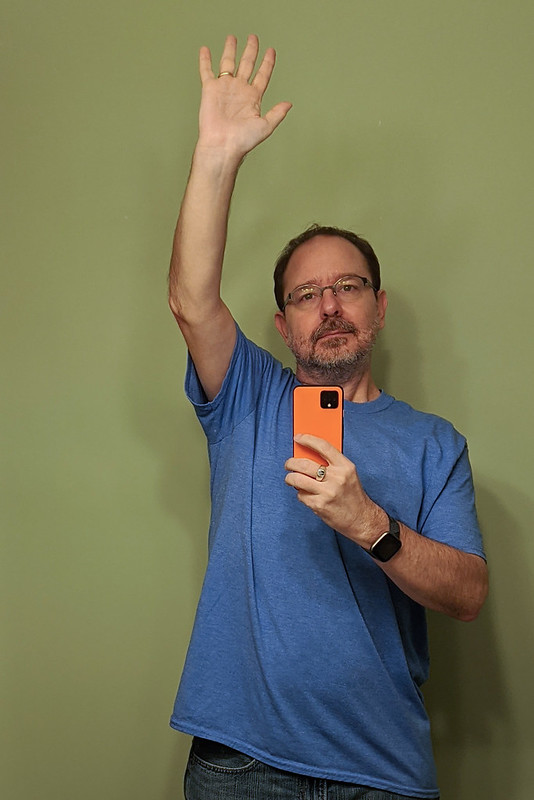 The picture above is not exactly the sexiest photo I’ve ever taken, but it’s notable in that it represents the furthest up I’ve been able to raise my left arm for several months. That’s because at the moment I have a physical condition known as adhesive capsulitis (more commonly known as “frozen shoulder”), which restricts my arm mobility quite a bit. As physical conditions go, it’s more annoying than anything else; it’s not great not being able to lift your arm past a certain level, but given my life and profession, it’s not the end of the world.

Still, it does come with pain and there are certain things that are more difficult to do, including commonplace activities like putting one’s carry-on into an overhead bin. It can and does eventually go away on its own, but that takes a couple of years, so today I went for a consult with an orthopedic surgeon to see if there’s anything that could be done to shorten up that progression.

The doctor’s answer: A shot of (I think) steroids into my shoulder, to reduce inflammation and pain and to help loosen things up. It’s done the last of these to some extent — again, this is as far up as I’ve gotten my arm in a long time. The fact the shot featured two different types of novocaine so I’m not feeling a ton of pain when I’m hauling my arm up probably helps a bit, too. I’ll be scheduling physical therapy as well and will be going back in about six weeks to see how things are.

45 Comments on “Meanwhile, In Range of Motion News”