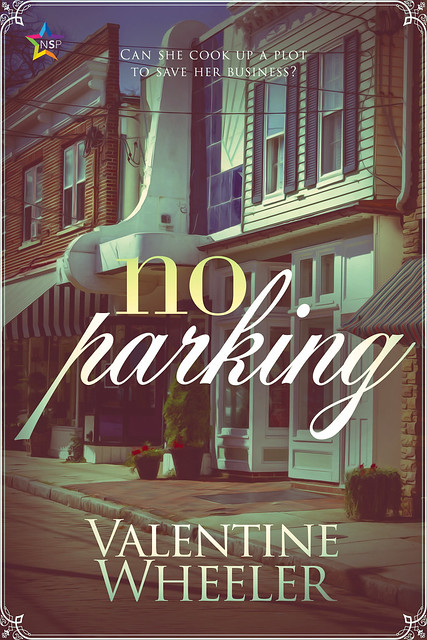 In No Parking, author Valentine Wheeler imagines a town undergoing change, and what it means for the people who live there. And it all started… with lunch.

I started writing No Parking because of a chicken wrap.

No, seriously. A new restaurant came to town, and they make a killer shawarma. I was eating a chicken shawarma wrap, and I was listening to a customer complain about our full parking lot, and inspiration struck.

Set in a small town southwest of Boston and southeast of Worcester, not quite making the metro area for either, the town of Swanley is struggling to figure out just what community means and who it’s for. Is it the descendants of the settlers that built the town, the commuters looking for an affordable house in exchange for a longer train ride to work, immigrants seeking a fresh start in a quiet place, the kids who grew up wanting to leave and still somehow stuck around? Ultimately, how can all these groups work together to make a place they all can be proud of and want to live?

I’ve lived in Massachusetts for nearly fifteen years, and every town I’ve lived in I’ve tried to be a part of the community by joining groups, volunteering, being a poll worker, and meeting my neighbors. I’ve always been someone who jumps in with both feet in a new place, for better or for worse; I love town politics and neighborhood associations and anywhere where people who live in close proximity are forced to come even closer together and work out their issues in front of all their neighbors. It’s like a locked-room bottle episode, but the tension’s sometimes wound even tighter.

I see this every day at the Post Office. I work in a small town southeast of Boston, not too far from where the town of Swanley would be. I see so many ways the community rubs up against itself every day in line (and in the certified letters people send each other… honestly, you don’t spend six years working for the post office if you’re not at least a little bit nosy). But I also see the way it can be beautiful. I see condolence cards and wedding invitations, Bar Mitzvah invitations going out to hundreds around the world and postcards crossing back and forth across a mile of town. I’ve watched all the little old houses get knocked down, and huge new ones put up–and seen the fights over the affordable housing and senior living communities when those go up instead.

Watching a town fight itself from a working class town to a tech-startup-filled suburb of the upper middle class has been fascinating, especially since many of the million dollar houses are now owned by the kids of the carpenters and train conductors and beat cops who lived there decades ago. When a town changes, people change with it–some of them, anyway. The question remains, though, of whether it’s the same town at all at the end of it.

Swanley is a town in transition, too, and the key conflict of the novel ultimately breaks down to that question. Who is a community for, and who gets to determine what that community means? Marianne Windmere, the main character of No Parking, has watched her town grow and change over sixty years, and she’s not sure if she’s ever fit in. But sometimes we don’t realize what we have until it’s threatened. Marianne doesn’t know if she loves Swanley. But she’s willing to find out. Because it’s the place that loves her, that knows her, and it’s where the people she loves are all tied together in their own ways. It’s home.

And where does her queer community fit in in a small town? This question, at least, I can answer. Because queer people find each other. These characters–bi, ace, trans, pan, gay, and lesbian characters all find their place in No Parking’s Swanley–and their relationships are woven deeply into the heart of Swanley and the heart of No Parking. We build our own community inside the larger one, and in a healthy community, that building continues outward and upward to fight for other marginalized groups just as hard as they fight for their own.

No Parking has, at its heart, a queer love story, but that’s merely the core of a series of interconnected love stories: a woman falling back in love with her town, the platonic love left behind after the romance has cooled and the relationship ended, and the love of the family you don’t realize you’re building.

One thought on “The Big Idea: Valentine Wheeler”