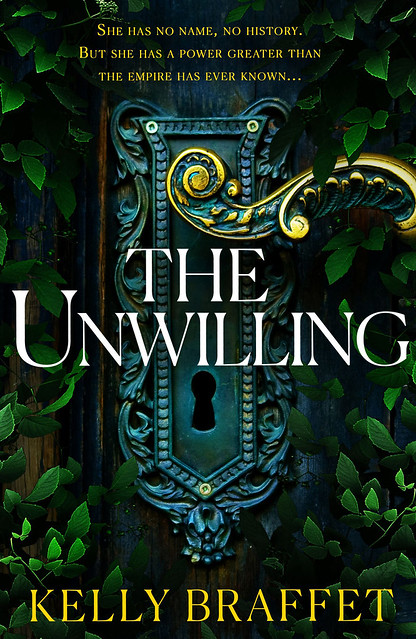 One of the cliches of the writing life is the writer in their cold garret, scribbling furiously onto pages. As Kelly Braffet tells us in today’s Big Idea, in her case this cliche is not entirely wrong, and also, it led her on the long and strange journey that resulted in her latest novel, The Unwilling.

Modern book promotion goes like this: you write a book. You sell the book. You edit the book within an inch of its life. Then, in the weeks before the book is published, you write essay after essay and Q&A after Q&A for blogs and websites and – basically – anyone who’ll have you. Anything to get your name out there. Lots of the Qs in the Q&As are very similar, and one of the challenges is to come up with fresh answers. Which is to say that I expected to write more than once about crime novels versus fantasy novels, and about working on the same novel for 20 years, coming back to it in free moments like a room you never quite finish painting; and about, oh, I don’t know, systems of magic and research methods and where I get my ideas. (I don’t know if I get them so much as they accrue in the corners of my mind over time, like mental dust bunnies.)

What I didn’t expect to write about was my last college dorm room, not at all – but here I am, about to write about it for the second time in a week, and I guess that’s one of the interesting things about writing in general, that it leads you to unexpected places. That dorm room was where The Unwilling was born, and the first thing to know about it was that it was terrible.

I was a senior, which should have earned me a pretty sweet spot, but I utterly tanked the housing lottery, and I ended up in half of a converted attic in one of the older houses on campus. If I stood in the exact center of it I could almost stand upright. My housemates and I did not actually talk to each other, not because we weren’t all nice people but because they were all friends who’d signed up to live together, and I was the antisocial introvert who lost the housing lottery. In general, I think that living situation can be best summed up by the moment when I ran into a woman at a party who was friends with said housemates.

“So, your whole house has scabies, huh?” she said, and then, horrified by my expression: “Wait – you didn’t know?”

Other things that year were less than ideal. Most of my friends had graduated, and the few that were left weren’t on the campus meal plan, so I either ate solo, which was depressing, or brought sandwiches back to eat in my terrible dorm room. I was also nursing a broken heart, and I stopped sleeping. I knew I was depressed and thought a volunteering gig might help, but the one I found was a long commute away and I didn’t like it as much as I thought I would. Nothing seemed good or hopeful, and there seemed to be no road forward. The only things that brought me solace were video games and reading.

In the middle of all of this, I read a fantasy novel by a writer I liked, and was very disappointed. I can write a better fantasy novel than that, I thought. It’ll be about four people who live alone in a castle after their kingdom collapses. There’ll be a tower. There’ll be a big wall, with a city outside it. At the time, I saw no metaphorical parallels whatsoever between my lonely life at the top of Andrews House behind the wall of my depression and the world that would eventually become that of The Unwilling, where my four characters lived lonely lives in a tower behind a literal Wall. I mean, I see them now. But now I’m 44; then I was 21.

Writers have themes that we go back to, over and over again. The stories all change, but they often tend to nibble around the same central theme, like those pedicure fish that eat the dead skin off your feet. I’m very interested in power, for one thing: all of my books are about people dealing with powerlessness, and the power other people have over them. My second constant theme, though, is identity: who am I? Who do I want to be? Who does the world think I am; who does the world think I should be? I think everyone struggles with this issue; there might be somebody out there who feels absolutely no tension between who they are and who the world expects them to be, but I feel like that would require near-superheroic levels of confidence. Living that way would be pretty great, I suppose, but believe me when I say I wouldn’t know.

I’ve spent twenty years writing The Unwilling. During those twenty years, I’ve written five other novels and published three of them. Through all of it, I’ve come back to this story, these four people stuck behind this wall. Part of the allure is that I love fantasy stories, and have since I could read; also, the tropes of the fantasy genre are uniquely suited to exploring that central question of identity. All of the central characters in The Unwilling are given roles at birth: you are the future City Lord, you are his future wife, you will command the army. My protagonist, Judah, is the only one without a prescribed role, and she suffers for it. The existence of magic is a wild card that gives that otherwise heavily controlled world the potential of breaking wide open.

We don’t have magic, unfortunately. Our only hope of breaking the world wide open is constant, conscious examination of those big questions. Who am I? Who do I want to be? Who does the world think I am? How do I bridge the gap between the two – or do I even want to? This is the biggest question of all, and it’s one we spend our entire lives poking at: in the reading of books, in the writing of books, in terrible little dorm rooms. Wherever we happen to be, whatever we happen to be doing. It’s the question that drives us forward. And I’m sure I’ll come back to it in my next book, and my next.