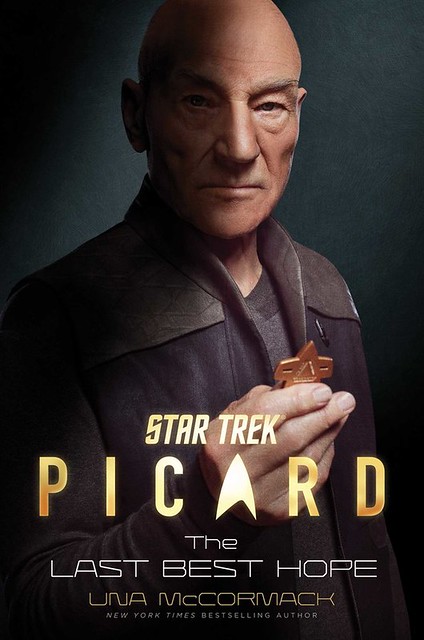 On the occasion of The Last Best Hope, the first novel associated with the Star Trek: Picard television series, author Una McCormack muses on Star Trek, the future it imagines, the present we live in today… and how it all comes together.

At the end of last year, I visited CERN. Yes, that CERN, of the massive magnets and the Higgs-Boson. I was one of a party that included a bishop and at least one other writer of speculative fiction. We were our own murder mystery in the making. It was a great day, talking to smart people about their visionary work, but the highlight was taking the lift down to see the Complex Muon Solenoid (CMS) experiment – one of the two vast particle physics detectors built on the Large Hadron Collider.  We went down, down, underground, and came out to see an incredible monument to human ambition, talent, organisation. The bishop and I looked out across this work and shared the sense of awe and wonder we were both experiencing.

Afterwards, I spent the day in Geneva. I visited the International Red Cross and Red Crescent Museum. On the way home, I was able to travel on my British/EU passport for one of the very last times. I kept thinking about what human beings can achieve when we collaborate on a large scale. Vast secular cathedrals that bring us closer to understanding the fundamentals of our universe. Humanitarian organisations that bring relief and bear witness. International treaties and agreements that, for all the bureaucracy, have contributed to maintaining peace in Europe for the best part of a century. I thought about how much I’d taken these things for granted across my life, and how fragile these institutions all suddenly seemed.

Such things were much on my mind when I sat down to watch the first episode of Star Trek: Picard. In this, I think, we are following the narrative of a man whose story stands at the intersection of great individual talent and wider, social need. A man whose personal qualities – wisdom, compassion, a humanitarian outlook – once formed the backbone of the organisation he served. But now we find him at a time of his life when the values he holds have become no longer congruent with the organisation to which he has been dedicated.

For those of us of a certain vintage, Star Trek: The Next Generation (TNG) offered not only a positive vision of humanity’s future, but one predicated upon collaboration, in which species looked beyond ties of blood and nationhood to find common ground with all forms of life. At the heart of this project was the figure of Captain Jean-Luc Picard: explorer, diplomat, scholar, humanist, a man whose chief drivers are curiosity and compassion.

Of course, TNG had its flaws. But in its best episodes, such as ‘The Measure of a Man’, in which the civic rights of the android, Data, are debated, TNG dealt thoughtfully, and committedly, with questions of selfhood, and our obligations to each other. In ‘Darmok’, Picard learns to communicate with an alien species who speak through metaphor, showing the joy of immersion in another culture, and the thrill of meaningful contact with the other. In ‘The Inner Light’, Picard lives an entire different life, as a member of a species long extinct, coming back to his own time to bear witness to the fact that they existed – that they lived and loved, and hoped to be remembered.

In Star Trek: Picard, we are presented with a future where the powers that be are no longer committed to these great ambitions. Starfleet, it seems, withdrew from the great challenge of its age, the humanitarian project to save the Romulan people from the effects of their sun going supernova, making a distinction between ‘lives’ and ‘Romulan lives’. We see a man whose values are no longer shared by the institutions to which he devoted his whole life, and who is struggling with this misalignment.

My British nationality no longer gives me access to my European rights. By a quirk of history, I am able to claim these rights through Irish grandparents. So can my daughter – but my partner cannot. These great endeavours – these great projects of human collaboration and organisation – sometimes we seem to be retrenching. We seem these days to prefer to emphasize what disunites us rather than what might connect us. Science fiction reflects our times back to us – but can also remind us that the future is not yet fixed. And that once upon a time, we dared to dream of futures which were not constructed upon exclusion and exploitation, but which reached outwards in the hope of collaboration, diversity, and mutual aid. Perhaps one day we will learn this trick again.