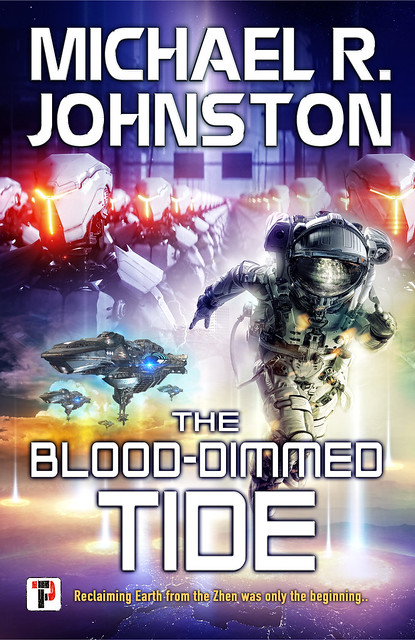 History doesn’t necessarily repeat itself, but it can inspire writing of the future — as Michael R. Johnston discovered as he started writing the series of which his latest novel, The Blood-Dimmed Tide, is part.

Some years ago, apparently unconvinced that being a full-time high school teacher, husband, and father (with a toddler!) was enough of a drain on my energy, I decided to go to grad school. This lasted only two semesters before I decided it had been a bad idea and walked away, but the decision to go, and one specific class, changed the course of my life.

The class, Modern Irish Literature, met at the ungodly hours of 6 to 9pm on Monday nights. We covered the literature of Ireland from the Easter Rising of 1916, through the War of Independence, the Irish Civil War and—much later—the Troubles, then up to the present day.

But while the class was fascinating, it wasn’t exciting. The first half of each class meeting was discussion of the reading, complete with student-generated “deep questions.” Sometimes the questions were provocative and thought-inducing, other times they were obtuse and unanswerable, but we’d spend a good hour and a half on them, batting ideas back and forth. And then the professor would read from his essays on the subject.

Listening to someone reading an essay is almost never exciting, and I would often find my mind wandering. One such night, I began to wonder if I could translate the Irish struggle for independence into a Science Fiction context. This was just me doodling, really, because I’d given up on the idea of writing professionally after three terrible novels (only later did I learn how many of my idols started by writing unpublishable novels). The more I thought about this idea, however, the more it began to feel like a story I had to write.

And then, after months of wrestling with it, throwing almost everything out and starting over several times, I had a novel. It got me accepted to Viable Paradise, where the remaining kinks were worked out of the story, and more importantly, my passion for being a professional writer—for writing stories other people would want to read and would pay for—was rekindled.

From late 2013 to early 2015, I rewrote the book, throwing out a lot of what I’d had, including the parts inspired by history. That became The Widening Gyre, my debut novel. In that story, starship captain Tajen Hunt and his crew discovered that their benevolent alien overlords are anything but benevolent. They kicked the Zhen off Earth and began to recolonize it with humans, no longer content with being second-class citizens of the Zhen Empire.

When I began The Blood-Dimmed Tide, I was able to return to the original idea of freedom fighters fighting a messy and complicated war. Many of the events in the novel are inspired by real events in Ireland, and the fates of some characters were informed by the fates of the real people who inspired them.

When The Blood-Dimmed Tide begins, Tajen thinks he’s got it all figured out. He found the lost Earth, he discovered the treachery of the Zhen, and he’s helped found a human colony to repopulate Earth. He even got the guy. He finally has a firm place to stand again.

But then everything he’s worked for is undone. The clean, easy space battles of Tajen’s past are replaced by a difficult fight for survival against an enemy that doesn’t care who they have to step on to get what they want. And, just as some Irish worked for the British, the Zhen have human agents among the people of Earth, working against the cause of human independence. Tajen is lost, his footing unsure, and he has to find his way back to stability.

Finally, just as in real life, there’s more going on than our heroes know, and events outside of their control are hurtling toward them.