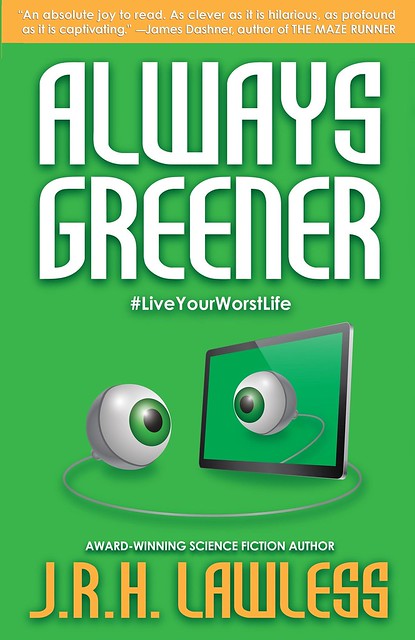 The thing with satire is that it has to have a relationship to the world we live in — and if we’re not careful the line between the two becomes blurred. As J.R.H. Lawless notes, in this Big idea for his novel Always Greener.

The Big Idea of this novel is, unsurprisingly, a direct result of where I was when I wrote it: Split between the office at the French National Assembly in Paris where I worked and slept, on one hand, and the black and white cottage in rural England where I’d work at a distance and take care of our new-born daughter when I wasn’t needed in Paris, on the other.

It should therefore be no surprise, once again, that the fundamental Big Idea ended up being that the power dynamics of our societies are fundamentally effed and that we, and our children, are all seriously boned if we don’t do something about it.

Not the most original of Big Ideas, certainly — but then again, there’s a reason for that; it’s because the warning remains as valid as it was when all the great dystopian writers penned their warnings about what would happen “if this goes on”. If not more so. But back in the sweet, innocent days of 2007 when I first started working on the piece, I came up with a series of hopefully interesting answers to the question of how best to develop that core dystopian Big Idea.

The first question was: What is the best way of showing the dehumanising effects of where we are headed on individuals, all around the world? The answer was: To show examples of some of the lives affected the most.

Which lead to the second question: What book premise could I come up with that would let me show those lives most naturally and effectively? That’s when I cooked up the core conceit for Always Greener: A future reality show where contestants compete for the title of “greatest victim” of the Corporate-run world, with lens implants allowing people around the globe to experience life through their eyes, 24/7, so they can vote on who the biggest losers are at the big weekly elimination feature shows.

Obviously, the right POV was an important third question, which lead me to my MC, Liam Argyle: A fundamentally optimistic man who accepts the job offer to become the host of this hot new reality show in hopes that it’ll give him a chance to finally make a difference in the world; without realising how violently the realities of the show, and of his contestants’ sorry lives, will challenge his faith in humanity.

Finally, developing the Big Idea meant deciding what tone would best carry that message home. And there was only one choice here, fuelled by the Pratchett and Adams I was surrounded by in my rural English cottage: Dark, uncompromising humour.

Wrap that all together, and the result is an adult SF comedy novel that’s been a long time in the making and hopefully kicks this series off with a bang, before the sequel, The Rude Eye of Rebellion, also hits the shelves in Fall 2020. The book is chock full of the most absurd situations and etymological footnotes I could come up with.