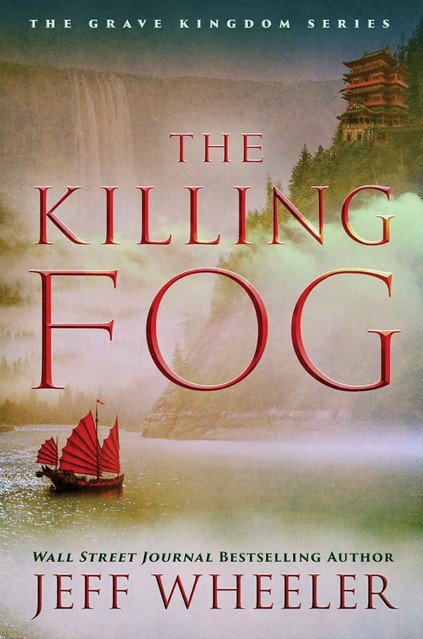 You may have heard of the expression “the stink of fear.” For The Killing Fog, author Jeff Wheeler is working with an idea that’s similar — and both bigger, and stranger.

Like many authors, travelling to different places has sparked my imagination in surprising ways. But it was during lunch at a restaurant with my wife, brother, and sister-in-law that the big idea came for The Killing Fog.

In my mind, I had already put together the idea for my new series. I’d recently returned from a writer’s conference in Beijing, so the culture and mythology was already stewing in my mind. The geography of this new world had been inspired by a trip to Alaska the previous year where I first conceived the idea of an ancient evil emperor who lay buried in his city beneath a massive glacier who continued to be re-born, conquering civilization each time. China is huge. Glaciers are huge. But neither of them was the big idea.

During lunch, I learned that my niece has a form of synesthesia I’d never heard about before. She can smell the emotions coming from other people. She knows, immediately and unmistakably, when someone is lying or trying to pretend to be someone they’re not, or if the person is just mean-spirited at heart even if they wear a smile on their face. You can wonder, as I did, what it’s like for a teenager in highschool to endure something like that. You can’t control it. You can’t shut it off—it’s always there.

As I listened to this during lunch, it made me realize that my main character in this new series needed this gift. That it would be the only way she could survive the return of the Emperor, known as the Dragon of Night. Smell is a sense we often take for granted, a sense that we enjoy when someone is baking bread or homemade snickerdoodles, and a sense we detest when there’s a toilet that needs unclogging. Imagine, though, if everyone had a smell based on what they felt. And you were the only one who could smell it.

I knew this idea would change the way I needed to write Bingmei’s story in The Killing Fog. Here’s a girl who watched her grandfather get murdered and knows the smell of the man who did it. She’s taken into a fighting school (it’s medieval China, there has to be martial arts!) and works with a group of honorable warriors against the enemies of the various kingdoms. They have no idea that an ancient enemy is about to be re-born, an enemy who knows magic and can control it in ways that no one else can. An enemy who would seem like a god, a being of incredible power and wisdom, one that most would welcome as a benevolent ruler. Except Bingmei, and only Bingmei, knows the truth about him immediately because of the way that he smells. He can’t hide the stink of killing countless people from her.

I had to write this series very differently than any of the other worlds I’ve written. Bingmei’s gift/curse impacted every scene. I had to invent different smells to represent complex emotions. And many times I’d forget that I’d already done one and would have to fix it later. That was frustrating! I needed a glossary of smells!

For Bingmei, when you know a merchant is lying to you, it helps to also know those who aren’t. She can’t be deceived. Yet she also lives in a world that is struggling to survive the harsh weather changes that come each year—remember, the terrain was inspired by Alaska. She smells the pettiness and greed that pervade her society. She also smells the love a mother has for a child. But in the balance, she senses the world as it really is and wonders if it is even worth saving.

The idea of a person smelling emotions had never entered my mind before that lunch date. The idea teased me, made me wonder how I was going to incorporate it throughout the series and try to make it seem real, as real as it was to my niece. Thankfully, she was one of my first readers and helped describe what it is like to live with her ability.