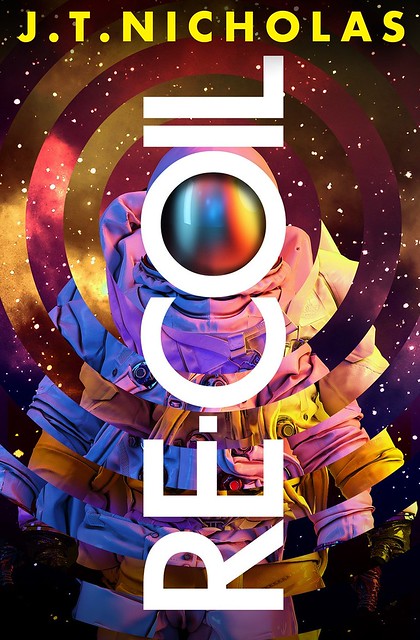 To quote the immortal Freddie Mercury: Who wants to live forever? If you think you do, here’s J.T. Nicholas with a couple thoughts to consider, via his new novel, Re-Coil.

What if we lived forever?

Most of us learn early on that we have an expiration date. But medical technology keeps getting better and better and that expiration date keeps getting pushed farther and farther away. Two hundred years ago, the average life expectancy was in the 30s and now that doesn’t even constitute middle age. So, what happens when we crack the secret of immortality? What if, once we had shuffled off the mortal coil, we could be stuffed into a new one, to pick up where we left off? And if something came along and threatened to take away that immortality, what lengths would we go to in order to keep it?

Those were the big questions, the big ideas, behind Re-Coil. What would happen to the world, to society at large, if death was transient? It’s not a new concept: the idea of breaking free of the shackles of mortality has been around forever in science fiction. We’ve got clones and cyborgs, beings uploaded wholesale to electronic wonderlands, brain switching and regeneration. We’ve got genetic manipulation to extend lifespans so long that it might as well be immortality. Hell, we’ve even got good old-fashioned resurrection. Defeating death is a common enough trope, but I wasn’t really interested in the mechanics, the how’s and why’s of it. The thing that I found interesting was what would it do to humanity, to society? And what would whatever society that emerged do to stop threats to that immortality?

You see, in the world of Re-Coil, immortality is an immutable right. If you die, you will be reborn… eventually. But with an ever-expanding population and scarce resources, new coils – new bodies – are always in short supply. Want to cut the line? Well, you better make sure your premiums are up to date, and the better the insurance plan that you purchase, the more likely you are to be put into a body that matches your specifications. Don’t have insurance? You’ll get there eventually, but you might lose a few years of personal objective time as you hang out in the Archives, waiting in perpetual nothingness to be reborn. And except for the best (and most expensive) plans, there are no guarantees that you’re going to end up in a body that matches your original equipment or personal preferences.

It’s that last bit that lead to the hardest aspects of writing Re-Coil. The story – the plot – is a whodunnit at its heart, a mystery where the protagonists are trying to hunt down their would-be killers and stop the first truly existential threat to humanity since mankind uncovered the secrets of immortality. It’s part mystery, part space action romp, and part cyberpunk conspiracy tale. But writing those bits was the easy part. For me, the hard part of Re-Coil was creating the world, fleshing out the societies, and answering the questions my agent and editor posed. Big questions on race and sex and gender and identity and power that I hadn’t really intended to write about, but once I set up the basic premise, I couldn’t possibly avoid. What happened to all those constructs and how society viewed them if a given person could find themselves wearing a body so different from the one issued at birth?

I knew I was dealing with sensitive topics in a sensitive time and, to be honest, I was scared shitless. Would I screw it up and inadvertently write the most offensive book of all time? Would focusing too much on those elements draw readers away from the story and make the book seem preachy? It was a fine line to walk and I’m fortunate to have had a group of people willing to help me walk it. The best thing about reading (and writing) are those unexpected moments where you find your horizons broadening a bit or where you’re forced to think about things in a different way. Re-Coil did that for me and I hope there are some others out there that it does the same for.

← The Cat in the Window
Super Tuesday Thoughts →