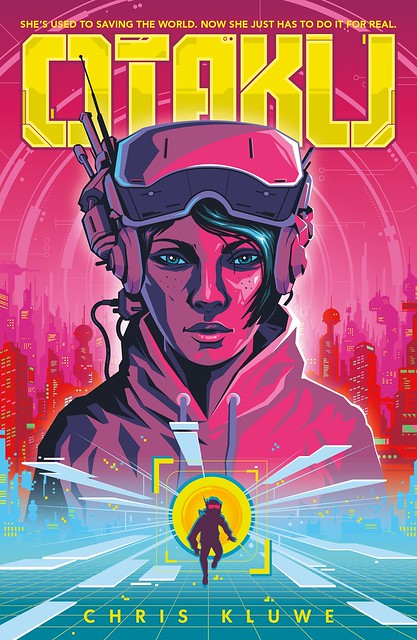 There aren’t a lot of people who are both a published science fiction author and also a pro-level athlete — but Chris Kluwe is one of those, and more besides. But in addition to the things he is, there are the things he is not. Both of those matter for his new novel Otaku, how it’s written, and who its protagonist is.

Today I’d like to tell you about the big idea for Otaku, my first traditionally published sci-fi novel, which I began as a love/hate letter towards gaming, but eventually turned into so much more.

More specifically, Otaku started as a middle finger towards Gamergate, in that I wanted to write a Gibson-esque thriller that “Pepes4Trump69YOLO420” would start reading as a firmly established cis-het white male power fantasy that they immediately identified with, and then once the protagonist was revealed as a half-black half-asian bisexual woman with a lock of dyed blue hair, their brains would recreate the scene from Scanners so quickly that their brain matter could coat a ten block radius.

What can I say, I like to piss regressives off.

After writing a couple chapters, though, I realized that there were many other things I wanted this story to be.

I wanted Otaku to be a story about climate change, and what that actually means to the social fabric, because that’s the reality of the world our children are going to inherit. Ever since reading Paolo Bacigalupi’s The Windup Girl, I realized that any future story set in our reality had to take into account the fact that we’re changing our environment, and not for the better. Otaku is set in Miami, and the reason why is that if you talk to any sort of risk assessor, they’re going to tell you that Miami is absolutely fucked. Like, 100%, the-water’s-coming-and-there-ain’t-shit-you’re-gonna-do-to-stop-it-fucked, and to me, that’s an interesting setting because there are so many places in the world that humans live that we shouldn’t, yet we persist anyways. If Miami goes underwater, I don’t think the human reaction is going to be to leave, because we never leave.

We built levees in New Orleans, and skyways in Minneapolis, and tornado shelters in Oklahoma, because we don’t care if the planet is trying to kill us, our desperate will to survive in even the most inhospitable conditions is a constant throughout human history. When the waters rise, we aren’t going to abandon the coasts, at least not at first. We’re going to fight it as long as we can (because a lot of rich people like their beach houses), and it won’t be until way after the fact that we realize fighting the sea is a losing proposition that the wealthy will retreat inland.

Miami’s skyscrapers won’t last forever, their gleaming steel frames looming out of the sparkling blue, but they’ll last long enough for generations to grow old and die in them.

I wanted Otaku to be a story about inequality; the rich staying dry while the poor scramble not to drown; the majority oppressing the minority because that’s the way it’s always been; the woman being told her place via violent misogyny because games are a man’s world and how dare you challenge that. The grinding, brutal inequality that pervades our world at such a granular level that it takes an effort of will not to burn it all down in the hopes of finding a single ash of justice, the voice of the priest who tells you to suffer while you’re alive because everything will be better once you’re dead.

“But Chris,” I hear you say, “you’re a cis-het white dude who made a bunch of money playing football! What the fuck do you know about inequality?”

That’s a valid concern. I don’t know a lot about inequality vis a vis personal experience and it would be wrong to claim otherwise. As John has written about on this site before, I have the world on the lowest difficulty setting.

However, I can talk to other people, those who have experienced the shittiness of being a woman online, of being a black queer gamer, of trying to navigate a dick-centric world, and when they tell me I’m wrong about something, that a character wouldn’t react that way, I can fucking listen.

Then I can make sure my story reflects their truth, because it is the truth.

I wanted Otaku to be a story about obsession, because having been both a professional athlete as well as a top-tier gamer (World of Warcraft, 3rd in the U.S. for Burning Crusade, Flying Hellfish represent), there isn’t actually a lot of difference between the two. Both demand hours of preparation, menial tasks that no one on the outside cares about (practicing punt drops; grinding consumables) yet are essential to the final product. Both reward those who can focus on a task to the exclusion of all else, even if it means broken friendships and families, because the willpower to shut out the world is what separates the champs from the chumps.

Both are merging, slowly yet surely, as we strive to recreate the real in the digital with perfect 1:1 fidelity. Pong joysticks gave way to N64 rumble packs gave way to Beatsaber wands and the future just keeps rushing towards us like a freight train. Ten years from now, who knows how we’re going to play.

Above all, I wanted Otaku to be a story that I was proud of, and I am. I think it’s a story that reflects where our society is now and where our society might go if we’re not careful (minus the swordfights against killer robots, but hey, you never know), and it would be an honor to me if you’d consider reading it.

See you in the real, chummer.