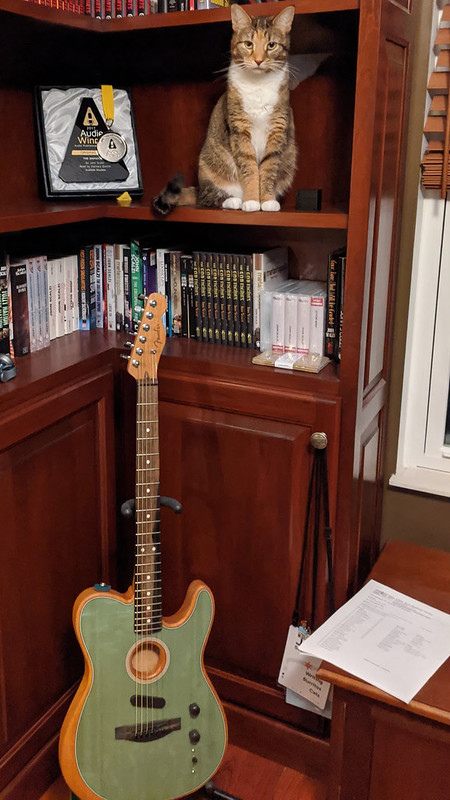 I’m learning a song on guitar because I’m going to play it on the JoCo Cruise, and I’ve been practicing it both on the Acoustasonic I got for Christmas, and on a travel-sized Washburn guitar that costs roughly a tenth of what the Acoustasonic costs. If you think this is going to go “and I could barely tell the difference between the two!” boy, are you ever wrong, because, wow, is there ever a difference, in terms of tone, feel, and ease of fretting.

There’s nothing wrong with the Washburn, to be clear; it’s meant to be a cheap and cheerful little guitar you can haul along with you on your adventures and not worry about banging up. It’s why I’m taking it on a cruise. I like it a lot and I’m glad I have it. It’s simply that, because I was practicing the song on both guitars, this is the first time I really had reason to make a side by side comparison of the two, and could observe the adage “you get what you pay for” is sometimes accurate. Is the Acoustasonic ten times better than the Washburn? Probably not, for whatever values you might assign to being better. But is it noticeably of higher quality? Yup.

Incidental to this is the question of whether I’m a good enough player of either instrument to make an accurate assessment — it’s possible that if I were a better player, I could make the Washburn sound better; it’s it’s very likely that at least some of the gulf between the two instruments is that the Acoustasonic is far more forgiving of my mediocrity. I remember watching a YouTube video where an expert guitarist is playing a toy guitar in a Wal-Mart and shredding on the thing; it’s a reminder that it’s the player as much and even more than it is the instrument.

I’m not an especially fancy person and there are a lot of places in my life where I’m not convinced that the upgrade value is there — I’m deeply unlikely to ever pay more than $25 for a t-shirt, as an example, because while a $100 t-shirt may be a joy to wear, I’m hard pressed to see that joy being worth $75 extra. Likewise, having ridden in very expensive cars, I recognize there is a material difference between a $100,000 car and a $30,000 one, but generally speaking the differences aren’t things I personally care much about. Guitars, it appears, are a place I’m willing to pay a little extra for that upgrade. If you have places where the upgrade is worth it to you, I’m curious to know what they are.

In the meantime, I’ll keep practicing the song, on the Washburn, because I’ll be traveling. Hopefully I can make it sound good, or at least better, before I have to perform it. The song, I mean. I’m not going to blame the Washburn if it doesn’t get there.

60 Comments on “The Upgrade Value”