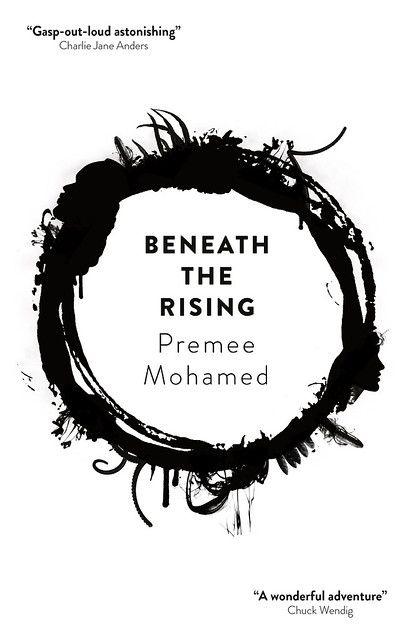 For the Big Idea about her novel Beneath the Rising, author Premee Mohamed considers the nature of one of the most important types of relationship we have, yet also the one that is many ways the least understood by those who participate in it. Which type of relationship is this? Read on.

The main thing you need to know about fruit fly research is that it stinks.

It is not glamourous. Their jellied slops are composed of sugar and yeast and malt. A fly lab does not smell (as you’d expect) like a hip new brewery, but stale or even recycled beer: a dive bar bathroom. Fabric and hair soaks it up and when you get home you have to segregate your clothes from the family wash. Such was my state in early 2002, when I was finishing ‘Beneath the Rising’ and an honours project on Drosophila chromosomes and a genetics degree. And, messily, visibly, also the tail-end of a depressive spiral. I was twenty years old and I did not know what I was supposed to be doing for the rest of my life.

Depression, as I was dimly beginning to guess, makes you wonder whether you are worthy of many things. Notable candidates included attention, respect, and love. I often wondered why my friends didn’t leave me, as I felt they should. Why they stayed, checked up on me, gave me their notes, took me to appointments. Listen, I’ve been writing this book, I wanted to tell them deliriously sometimes. It’s about knowledge and power and prestige. The keeping of the gates against disaster. I mean, more than one type of gate. But other things. You don’t even know.

It did not occur to me that below these grand and worrisome things I was really writing about the relationship between the two kids. Reproducing my own life, and my friendships, and how my breakdown was causing a re-evaluation of what friendship meant to me. That friendship was not lesser than romantic love, only different, and the unfairly short shrift it got had to do with how we, as a society, construed its necessity.

Friendship was easy; it was the love you learned immediately after learning to adore the people who kept you alive. Easy to pick up, easy to feel, easy to calibrate against other loves as you got older. Easy to fence off from romance, which existed absolutely on its side of the electrified wires.

Romantic love seemed animal. Was me shouting at my flies “Mate, dammit!” when I threw them into a vial. Platonic love seemed rational. A calculated weighing of what was owed, what was deserved, what was earned. Under this framework, it seemed even worse to me that my friends were my friends. What had I done, depression wanted to know, to retain their friendship?

In ‘Beneath the Rising,’ the narrator, Nick, struggles with this just as I did; we could not articulate it, especially under duress (admittedly, mine was not due to fighting actual monsters). In fiction, we are told, character is destiny. Plot derives from characters’ desires: they want something, they make choices to get it, they are thwarted, boom. But I had begun to ask myself: Aside from those, what if there are choices made not to achieve your own goal, but in order to keep a friendship intact? What would you do to preserve a relationship that is not romance, especially if you want it to be?

And these are difficult questions for him, they are not easily answered. The friendship is uneven in many ways; how can you be friends (he wonders) with someone who will not even acknowledge the imbalance, let alone the other elephants in the room? What does it mean to give up your own desires, or more noble ones, for that?

People ask me: Would the book end the same way if you wrote it today? I am not sure. It seems crucial that I have had eighteen solid years of brain development (and avoiding quite so many solvent fumes), true. But I have also had years of watching who stayed with me and who left when things were at their worst.

The friends who got me through 2002? Are all still with me. I could not drive them away by being so consumed by my degree that I neglected them, ignored emails, constantly showed up to things fresh from the lab with flies in my hair or covered in radioactive markers (and always smelling like regurgitated beer). And I have patiently waited out unrequited love many times in those years as well. I, the grown-up reader, am angry at Nick for being the way he was; but I, the teenaged writer, did not want to leave it out. I wanted them to make bad choices. I wanted the exhausting exorcism of writing a one-sided romance buried in a friendship like a shard of glass in a soft fruit. I don’t know that I want that any more.

Now, I wonder about who gets driven away and who doesn’t, and who comes back. I wonder about conditionality. It’s a theme reprised (now that I look at it) in everything I write, in which no one is loved romantically, or everyone is loved platonically, and every relationship lives in the blurry grey area that I used to think was neatly separated. I look forward to frustrating readers with it just as I continue to frustrate myself; because none of this, it turns out, is science.