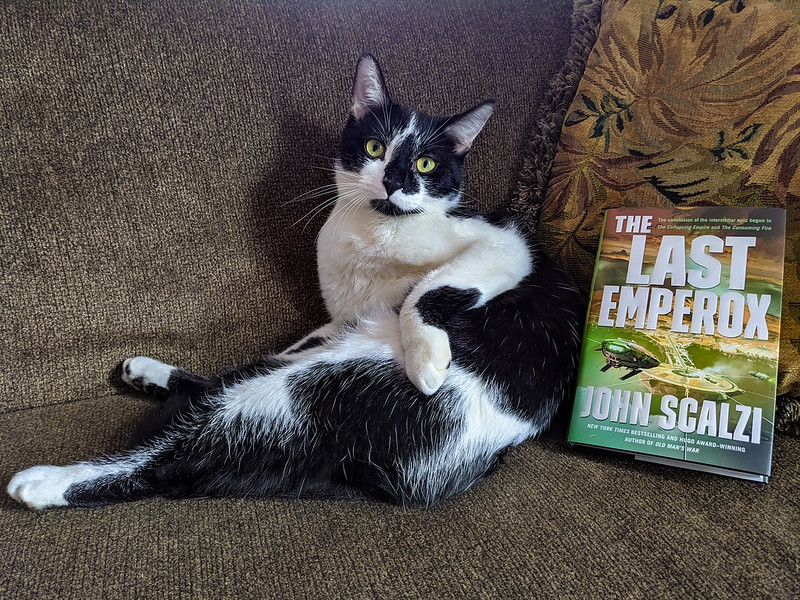 So, let’s get right to it, folks: The book tour for The Last Emperox has to be cancelled.

Why? Well, I’m pretty sure you know why:

1. There’s a global pandemic going on as we speak.

2. Gathering in groups is not a great idea.

3. In a lot of the places where my tour stops are, gathering in large groups is currently not allowed.

4. A number of the events and festivals that I was going to as part of my tour have already been delayed or cancelled.

5. Neither I nor Tor can in good conscience ask people to risk their health — or the health of others — just to come see me do my thing. These are extraordinary times and circumstances, and we want you all to be safe and healthy, today and in the future.

I want you to know that neither I nor Tor have come to this decision lightly. If you’ve ever seen me at an event then you know how much I genuinely enjoy them. I love coming to town, seeing all of you, and supporting booksellers in their communities. I am as unhappy about this as you are. But! This is just one tour. There will be other books, other tours and other opportunities to see each other. Let’s keep that in mind even if things are disappointing right now.

Also and this is important: If you have pre-ordered The Last Emperox from your local bookseller in anticipation of my upcoming tour event, please keep your pre-order with your local bookstore. The next couple of months are going to be very difficult for local business, bookstores included. They will need your help to make it through what is going to be a very tough time. On my end, I’ll be doing what I can for the bookstores where we had announced tour events to get signed copies and/or bookplates to them. We’ll try to do right by them and you on that score. That’s another reason we’re announcing this now — so we’ll have enough time to work with these stores.

Also remember that I am signing and personalizing copies of The Last Emperox through Subterranean Press (get your orders in there soon; I’ll be signing those at the end of the month), and that you may also order signed books through my own local bookseller, Jay and Mary’s Book Center of Troy, Ohio — and that’s any of my books, not just Emperox.

Finally, and just to be clear about this, I will be promoting the crap out of The Last Emperox. Folks, I’m not bragging when I tell you this book is really good; I can’t think of a book I’ve written before where I’ve been this excited to have you all read it to find out what’s happening with the characters and the universe. I want to share it with you and talk about it with you and geek out about it with you.

That being the case, just because I’m not going to be able to do a physical tour doesn’t mean I won’t be around to talk it up and to get with you all. I had a long phone call today with the folks at Tor where we thought about what to do for the book and how we can get people excited for it. We have plans. Oh so many plans. You will find out more about them soon. This will be fun. Stay tuned.

In the meantime: Wash your hands, be kind to each other, support your local businesses including your local bookstore, and above all be ready, because in less than a month The Last Emperox will be out. It will be worth it, and I can’t wait for you to get your hands on it. 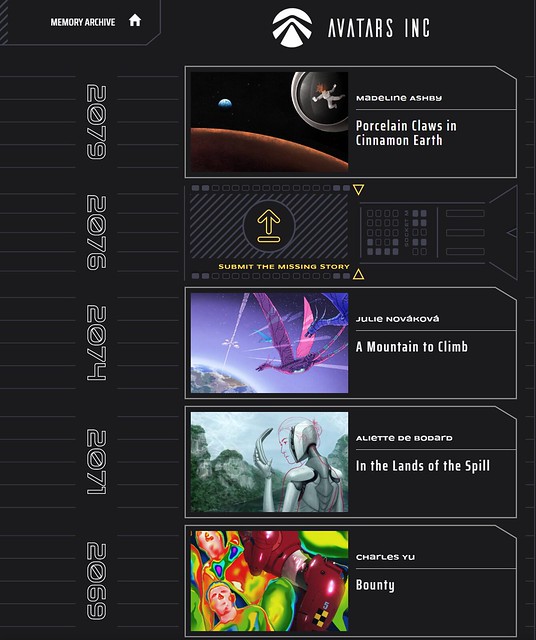 And now for something a little different: A Big Idea about a Web site, not a book: Avatars, Inc. But it is an anthology, and it’s something I think qualifies here, because as editor Ann VanderMeer explains, it’s got quite a big idea behind it.

The XPRIZE Foundation has been around for over twenty years, doing great work by incentivizing breakthroughs in science and technology. In 2018, XPRIZE produced Seat 14C, its first fiction anthology, followed by Current Futures in 2019, and now Avatars Inc. The goal: To use storytelling to intrigue and inspire the public about our possible futures, brought about by the work XPRIZE is doing today.

There has been a big push in the last several years in current STEM programs around the world to add in the “A” for Arts and have STEAM. And why not? Including the arts into any science and technology program will only expand your reach and include more people. It’s much easier to get the point across in a story than in a bland, jargon-filled article. Which is why you are seeing more and more fiction writers invited to speak at science conferences.

We face many challenges in the modern world, what with climate change, health issues, global conflicts, access to education, and poverty. At XPRIZE, people are working together to find solutions for the future. And the stories being expressed with the XPRIZE anthologies give rise to the imagination. Indeed, storytelling is often used for applied creativity in problem solving.

The relationship between science fiction stories and actual science has always been there. Many scientists who became involved in the Space Program at NASA were early readers of science fiction and were inspired to make a career of science. It’s not just that certain technologies and ideas that originated from science fiction stories become real in our modern day, but also that some SF readers go on to pursue careers in the sciences and make an impact in the world.

I was first approached last year to edit the Current Futures anthology to promote World Oceans Day. I had the opportunity to bring in new voices and work with other writers that I knew and admired. It was a dream project and I was thrilled to see writers like Rochita Loenen-Ruiz, Deborah Biancotti and Karen Lord get excited about stories and work with them again. I was also thrilled to work with other writers for the first time, including Malka Older, Madeline Ashby and Gu Shi.

When I was later asked to edit Avatars Inc, I immediately said yes, and what a wonderful venture it has been. I love working with writers from all over the world and seeing what they can come up with. In this case, they were asked to imagine the uses of avatars in the near and far future. This idea expands on the real-life ANA Avatar XPRIZE competition underway with teams all over the world competing to develop avatar technologies. As innovators work together to develop uses for real avatars, the writers work to imagine what could be. And one of the things that science fiction writers do best is explore the possibilities of “What If?”

Pat Cadigan’s story “The Final Performance of the Amazing Ralphie” imagines the avatars entertaining those consigned to off-planet hospice care. People struggling with health care issues need more than medical attention and this story shows how technology can step in and enhance the lives of those that may have been forgotten.

Avatars are often used in places where it is tricky for humans to navigate. In “Uma,” by Ken Liu, avatars move high up in the power lines to fix and maintain the electrical power structures that we all rely on so heavily. But in this story, their use is pushed beyond the original mandate when life is threatened. Their original purpose is questioned and new uses are discovered.

In both of these stories we can see the typical uses for avatars expanded beyond the original ideas and that’s what gets me so excited about these narratives. Yes, medical and mechanical uses are abundant, but these writers take this a step beyond and imagine what would happen if the avatars (and the humans operating them) are pushed further. Indeed, some of the best inventions have come about when an original idea paves the way into something else. For example, something as simple as the Post-It note, or more complicated like the pacemaker, were both discovered as a result of other pursuits.

After spending the last couple of years fully invested in fantasy while I worked on two mega-anthologies (The Big Book of Classic Fantasy and The Big Book of Modern Fantasy – a combined total of over 2000 pages!), it was refreshing to dive back deep into science fiction. And it reminded me that there are so many highly intelligent creators out there, both in the arts and in the sciences, who continue to create and innovate fearlessly and without slowing down. It brings me much hope for the future that even as we seem to be facing dark days ahead, there are others who show us what opportunities can be achieved and how far we are willing to go to ensure a better future.