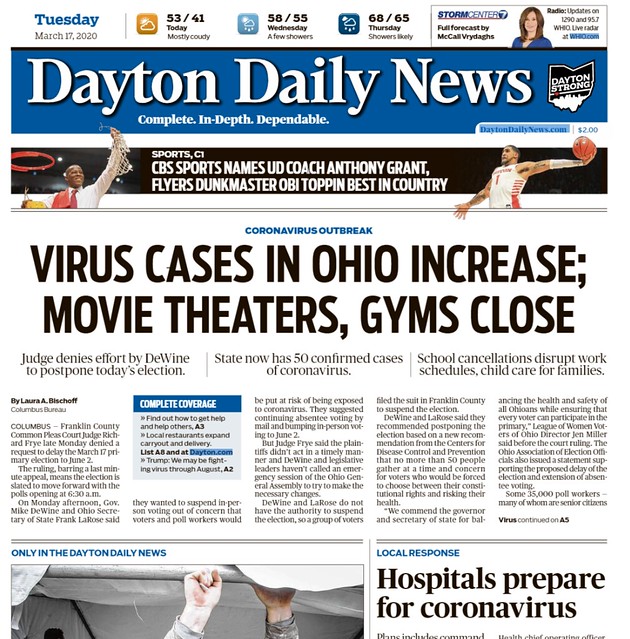 * First off, this is an apocalypse that I have to admit seems uniquely suited, on a day-to-day basis, not to inconvenience me all that much. Let’s recap: I’m an introvert writer who works from home, rarely goes out, does almost no local socializing and who has over the years developed long and fruitful relationships with people he mostly hangs out with online. What we’re all doing now? This is my actual life. Staying at home for weeks at a time without outside human contact is what I do anyway. I know this current situation is difficult for a lot of you, and you’re struggling with this enforced isolation. I do sympathize, and I mean that entirely without irony or sarcasm. But for my own self, well. I got this.

* Also, on a slightly more serious note, this current apocalypse is one I and my family are fortunate to be equipped to handle. We live in a small town on some land so “social distancing” is not exactly difficult. My wife’s job already let her work from home two days a week, so she already had her infrastructure and habits set and we already have a “both of us working from home” routine set. Her working from home five days a week (as she’ll be doing for the next several weeks) will not be a problem. As already noted, I work from home anyway. Our kid is back at home right now, but we like having her home, and she likes us too, so that’s great. We have health insurance and we can cover our deductible without a problem, and we are all generally healthy. We have money in the bank and no debts or immediate financial concerns. We have satellite TV and streaming services and internet and musical instruments and, of course, thousands of books. We have cats. We’re fine. Mind you, if civilization collapses entirely we’ll be just as fucked as everyone else. But until then: We’re fine.

* However, I’m well aware that not everyone else is fine. Even leaving aside those who are ill or taking care of the sick, there are millions of Americans who are not in a great position to weather weeks at home, and whose jobs and lives and incomes and health are threatened by the Great Stop of Everything we’re seeing now. I am worried about friends and family and I’m worried about local businesses. We are giving thought to how best we can help, locally and with the people we care about. There’s a rush to do everything up front, but this is something that’s going to be with us for a while, both in the immediate crush of crisis, and the long follow-up of reconfiguring our lives to what comes next. We’re thinking about both, and what we can do.

* And it’s not as if the current situation isn’t affecting me, either. I just had a book tour cancelled, because it’s unlikely things are going to take a sudden magical turn for the better in less than a month. That’s going to have an effect on how the book does in the short run — as will the fact that people are at home rather than out at bookstores, and that they’re worried about their finances, so book purchases may (understandably) be a lower priority for some. Long-term, I think it will be fine; one weirdness of my career is that I frontlist well but I backlist like a friggin’ rock star, so in time any hiccup with the launch will probably be smoothed over (EVEN SO pre-order The Last Emperox right now, if you can, please and thank you). But yeah, I’m going to take an early hit on this, possibly a real big one. It is what it is.

Also, that portion of my retirement account that’s invested in the stock market has, uhhhhhh, taken a bit of a haircut — the stock market is down a third from its highs, and much of that has been in the last couple of weeks, while our incompetent national government has been saying and doing exactly the wrong things, frequently and in sequence, and the repercussions of our economy shutting down have hit the markets. The “good news” here, for me, anyway, is that I’m not retiring for 20 years anyway (if writers ever retire at all), and this isn’t the first massive market correction I’ve weathered as an investor. You may recall the 2008 unpleasantness, for example. But it’s still rather emphatically not great.

Again, I’m fine, my family is fine and short of a complete collapse of civilization we should get through this okay. We are affected less than others, and you really should not feel sorry for us. But we’re still being affected.

* Let me talk a moment here about the president and the federal government and their response to this crisis, and let me begin by noting that no matter who was in power, this global pandemic would have happened and it would have been horrible for people and the economy. This is a tsunami that feels almost specifically designed to swamp the way we’ve designed our global systems and the way we move around in the world, locally and internationally. This was always going to be bad; the role of national governments in this case was always going to be how to mitigate the awfulness as much as possible.

With that said, let’s not pretend that we did not have the absolute worst president and administration possible for the circumstances presiding at the moment (and yes, this is a recurring theme). We did and do, and we and our economy are currently suffering for it. The president and the administration lied and minimized and denied responsibility while all of this was happening, and wasted billions trying to prop up markets that collapsed regardless. I mean, I know why they did that: one of the great “justifications” for the incompetence and malign nature of the Trump administration has been a smug “how’s your 401(k) doing?”, as if one’s retirement account excused the vast corruption and incompetence.

Well, the answer now to that smug question is: Terrible, actually, it’s lost every single gain it’s made in the last three years, and it lost it in just under two weeks, in no small part to how the administration bungled the response to this. Now everyone is at home and lots of people won’t have jobs or money after all this is over. What’s the excuse now for this awful, terrible, incompetent regime, now that the nation’s 401(k)s are well and truly screwed? There is none, except, basically, racism, bigotry and “owning the libs.” Enjoy your MAGA hat, folks. That’s all you’re getting out of this presidency.

At least our response (now) isn’t “Get them all sick, let God sort them out,” which I understand is the current UK government response — or was until I think yesterday evening, when the Tories figured out they were going to end up slaughtering mostly their own voters. Congratulations, US, for not having the absolutely most heartless national response to a global pandemic!

* This would also be my cue to slam US conservatives in general for their “let’s pretend this isn’t happening because if we say it’s not happening then it won’t happen” mode of thinking and responding, and generally speaking I would not be wrong to do so — except for the actually conservative government of the State of Ohio, in which I live, which has been doing an overall very decent job of recognizing there’s a crisis. It’s been shutting down the state in an orderly fashion so that people will just stay the hell home, already, and coordinating with local governments to stay on top of things. They were doing these things at the same time or even before more liberal state governments in places like California and New York were doing their things. Apparently, conservatives in Ohio may be conservative, but they still have some relationship to a reality that’s not been entirely crafted by Sean fucking Hannity and Fox News. So thank you, Ohio conservatives, for generally being in the same world as I am, at least for this bit. It’s heartening.

(EXCEPT for this complete bullshit, closing down the polls as a health hazard at ten fucking thirty the night before the Ohio primary, with no prior notice and with no actual plan to reschedule the primary aside from “oh, we’ll move it to June, except that I, the governor, have no legal right to do that, so, uh, yeah [Jedi hand wave].” I usually vote early in Ohio, but didn’t this time, and now I’m kicking myself. Never again. Also, hi, folks, do your voting early/by mail this year if you can, because you just know this bullshit is going to pulled again come November. There is literally no excuse for this last minute rug pulling, and everyone of every political persuasion should be waving red flags about it.)

* To come back to me for a moment, and I think for the duration of this (at least), one of my plans will be to write more here, and to do what I can to support other writers and to give people things to read and do to occupy their time. What that means at this point I’m a little fuzzy on, other than probably writing more posts. I’m figuring this out as I go along like everyone else. But again, I know this isolation thing is tough for folks, for all sorts of differing reasons. I’d like to do what I can to make it a little more bearable. All which is to say: I’m working on it, folks. We’ll see what comes of it.

(Note, because I see some of you hovering over your keyboard, I’m not looking for suggestions on what to do. I’ll figure out what works best for me. If I do want suggestions, I will specifically ask. But thanks!)

* We’ll get through this, most of us. Wash your hands, stay home, take care of yourself and your family and look out for your neighbors and friends. Don’t hoard toilet paper or milk or whatever other saleable good everyone seems to be panicking about today. Stick to actual reputable news sources and don’t forward bullshit you see on social media. Support your local businesses now so they will be around when all of this is over. If you can, buy a book (waves) or subscribe to a Patreon or otherwise give support to the creative people you know who are low-key panicking about how they’re gonna eat for the next month or two.

Finally and for the foreseeable future: Let’s be kind when we can. I bet we can be kind most of the time. Let’s all try it and see.

68 thoughts on “A Bunch of COVID-Related Thoughts”