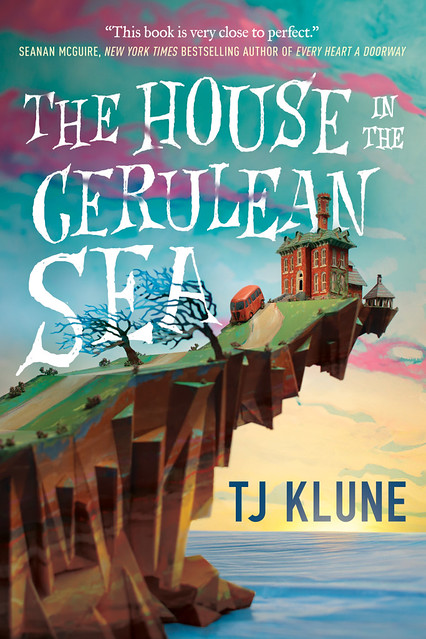 In the writing of The House in the Cerulean Sea, author TJ Klune looked a little history north of our border — and current events right here in the US — to inform his world of magic, and bureaucrats who seemingly trudge through it.

When an author gets an idea in their head—one with legs that isn’t just a fleeting thought—it tends to worm its way into our brains and won’t leave us alone until we either write it down or kill it with fire.

Before I started The House in the Cerulean Sea, I had the pieces of an idea, these little shards that didn’t quite come together into a clear picture. It had to do with magical people dealing with fear and discrimination. Specifically, it would involve magical children, those who should have been protected at all costs, but instead were shunned for simply existing at all.

It helped (maddeningly so) that I could already hear the main character’s voice in my head, a fussy fellow named Linus, who was a stickler for the rules. He would be a caseworker in an Orwellian world, where the government sees all, knows all, and controls everything. Linus would work for said government with the bureaucratically gloomy name of The Department in Charge of Magical Youth (DICOMY), a drone who did as he was told because it was expected of him. And he’d be queer, because that’s what I write: queer people from all walks of life.

The pieces were there, but the picture was still fuzzy.

It remained fuzzy until I stumbled across the Sixties Scoop, something I’d never heard of before, something I’d never been taught in school (I’m American, by the way). In Canada, beginning in the 1950s and continuing through the 1980s, indigenous children were taken from their homes and families and placed into government-sanctioned facilities, such as residential schools. The goal was for primarily white, middle-class families across Canada, the US, and even Europe—to adopt these children. It’s estimated that over 20,000 indigenous children were taken, and it wasn’t until 2017 that the families of those affected reached a financial settlement with the Canadian government totaling over eight hundred million dollars.

I researched more, and discovered instances the world over, in my own country and abroad, of the same thing happening: families being separated because they were different, because of the color of their skin, because of their faith, because those in power were scared of them. I wrote The House in the Cerulean Sea in the spring of 2018, months later, in the summer, news exploded from our southern border about families searching for a better life being separated and put into government-sanctioned facilities.

History, as it does with terrifying consistency, was repeating itself once again.

Let me be up front about something: I’m a white dude. There really isn’t much I should be preaching about. I’m queer, and a loud one at that, but the marginalization I’ve faced because of this isn’t to be compared to others facing bigotry. It’s not a contest. It sucks across the board, but I’m a mid-thirties cis man in America. I’m privileged in ways others are not. I know this, so when I wrote Cerulean, I knew I had to do so carefully, to make sure that what I’d decided on to be the central theme of the story wouldn’t be lost.

Look, I get how that sounds. I’m sure more than a few of you reading this rolled your eyes at the word. It’s trite, isn’t it? Sure it is. But stick with me for a moment.

As I write this, it’s 2020, and we’re so divided, I don’t know how we’ll recover from it. Those in power fling insults as easily as they breathe. People take to the streets in masks and hoods, spreading their hate as if it were gospel. We’re all so angry almost every second of every day, and we have a right to be. We should be angry. The world is on fire. The news grows more dire with each new breaking broadcast. People are hurt—or worse, killed—because of who they love, what they believe, or the color of their skin. We’ve lost our way, and I worry that this has become our new normal.

I can only do what I think I do best: write. And so I began writing The House in the Cerulean Sea, imagining a world not so different from our own, where people who are different than the majority are controlled by those in power. The smallest of us—the children—are taken from their homes and placed into euphemistically named orphanages, overseen by caseworkers in DICOMY. Linus is sent on a top-secret assignment to investigate a special orphanage, one hidden away, housing what the world considers to be the most dangerous of children.

What he finds there changes him. How exactly, you’ll have to read for yourself, but I never strayed away from kindness as a theme. It was—and still is—important to me. To offer a hand in compassion rather than a fist raised in anger seems like it should be common sense, but many appear to have forgotten that. We, like Linus discovers, need to use our voices for those who can’t speak for themselves, those who should be allowed to be small in this great, wide world. But sometimes we also need to shut up and listen to those small voices, because if we don’t, we run the risk of drowning them out.

We are better than what we currently seem to be. I know we are. And I don’t believe it’s too late for us to course correct. It’s going to take time, and a hell of a lot of hard work, but we’re capable of it. The House in the Cerulean Sea is my great wish into the universe, a fable about the goodness in us all, if only we can believe in it. Hope is a weapon, kindness our battle cry. As long as we stand together, I know we’ll shape this place we call home into something we can all be proud of.