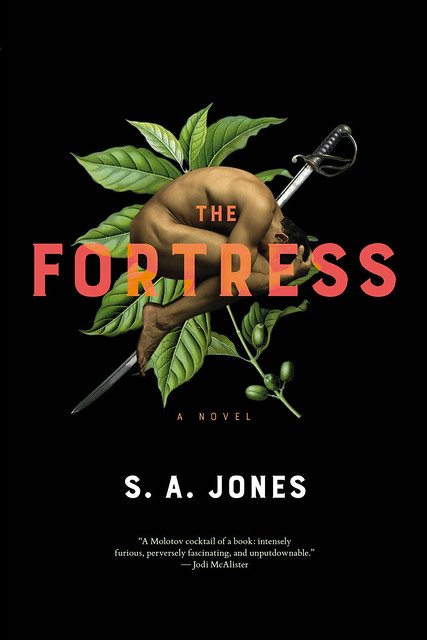 It’s not every day that your book is the debut novel for an entire publishing line, but S.A. Jones has that honor with The Fortress, which is the first release from Erewhon Books. It’s a big responsibility, but as you’ll see below, Jones has a big idea to match.

I began writing The Fortress when I was twelve, although I didn’t know it then. At the time I was a competitive swimmer and had the occasional dream of Olympic glory. But I also wanted to be Prime Minister of Australia and David Attenborough, so I was keeping my options open.

Along with four others in my swim squad, all boys, I had achieved the qualifying time to try out for the state team. This meant travelling from our tiny island in the Buccanneer Archipelago in Western Australia to the “big smoke” of Port Hedland in the Pilbara region.

Being four boys and me in the 80s, our squad was called “SJ and the Meaner Machine,” after the formidable Australian freestyle relay team “The Mean Machine.” My initials are “SJ.” We had shirts made up and everything.

We were chaperoned by the coach and his wife and billeted with a family in Port Hedland. A roster of chores was drawn up for us five kids while we were there. This was a sensible thing to do given we ate constantly and created mountains of chlorinated washing.

When it was Jeffrey’s turn to do the dishes, he refused. This put my coach and his wife in an awkward position, because Jeffrey was their son. His parents insisted.

Jeffrey refused and began to glow red around the ears. This was a warning sign we were all familiar with. Jeffrey’s tantrums were epic: a loud, kinetic spectacle that he claimed to have no memory of afterwards.

The embarrassment in the room at Jeffrey’s refusal became a palpable thing, another presence.

As the redness spread from Jeffrey’s ears to his temples and a high pitched whine began to escape his mouth, Jeffrey’s mother announced that I would do his dishes.

His dishes. As well as the dishes I was rostered to do.

But the desire to avert a scene was stronger than the inclination for fairness, and my protests fell on deaf ears.

As I stood by the sink doing Jeffrey’s dishes, my face burning with humiliation, Jeffrey smirked at me from the doorway.

For the few days we were billeted there, I had to do all Jeffrey’s chores as well as my own.

As injustices go it was trifling. It probably doesn’t even rank in the top ten most sexist experiences of my life. What is significant is that during those few days my consciousness of girlhood, and what that means in relation to boyhood, was born. Even setting aside the gross error of judgement in releasing Jeffrey from his chores, there were three other kids in that team that could have shared the load. But they were boys.

Housework was girl work. I was the girl. The SJ in the Meaner Machine.

I’ve given a lot of thought to what it is to be a girl. In some ways, Jeffrey has always been smirking at me from the doorway of that kitchen.

But where was the book about Jeffrey? About what happens to a boy who learns early in life that the world will bend his way. Who is not taught to discipline his emotions and appetites. Who expects that handmaids will clean up when he won’t.

And more importantly, what does it take for this man to change?

The Fortress is my answer to that question.

What is evident is that empathy is not enough. If it were, we would have no difficulty entering into the reality of other people’s lives and changing ourselves to better their reality. Fathers would discard sexist expectations as they raise daughters. White women would unpack their colonialism as they understand how it distorts the lives of their friends of color.

Clearly, some people do work from empathy to change.

But if empathy were sufficient in itself, our world would not look like it does. That is why The Fortress is so carnal. I could have told this story while being coy about the sexual elements in the way of “serious” literature. But I want the reader to be physically discomfited. The aroused and feeling weird about it reader is the reader I want. The reader I designed.

The Fortress is supposed to get under the skin because imagination – the gateway to empathy – isn’t enough. Change is not an intellectual exercise. It is gritty, visceral and awkwardly physical. Like shame (which often pre-empts change), it happens in the body.

← Great Scott
Till the Heart Caves In: An LP-length Mixtape Playlist →