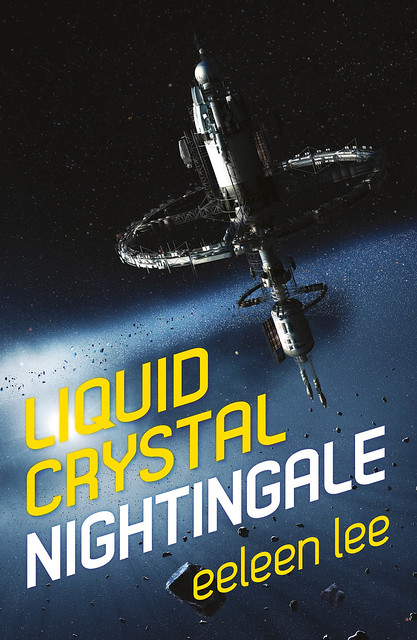 Travel delays are rarely the raw material for novels, but as Eeleen Lee found out, sometimes a little time — and a new obsession — can lead to inspiration, and eventually a novel, in this case, Liquid Crystal Nightingale.

In late 2005 I was stuck in transit at Charles de Gaulle airport, and to pass the time I bought a notebook and made myself do a few writing exercises.

“Write what you know” goes the clichéd advice. I had just begun collecting rocks and minerals as a hobby and was eager to use this new knowledge. As the novel took shape over the next several years it deviated from the original plan: I had envisioned a collection of science fiction short stories, in the style of Primo Levi’s The Periodic Table. Each chapter was to be inspired by a mineral or some aspect of gemmology.

The second story I drafted was about a city called Chatoyance. It looked like a giant cat’s eye when seen from space, and this trait was inspired by the interplay of bands of reflected light on the surface of certain minerals such as tiger’s-eye.

In collecting specimens I also collected myths, superstitions, and legends. Diamonds are a girl’s best friend and allegedly, they’re forever. The ancient Chinese believed when a tiger died its soul entered the ground and became amber. Opals are the captured interplay of fire and oil on water, according to Pliny the Elder. Diamond and opal are the birthstones for April and October, respectively.

Out of all this extensive lore and romance a universal recognition of eternity emerges, albeit bookended by birth and death. Gems⁠—and humans⁠— are shaped by and subject to the forces of time.

What is associated with power, magic and romance, is unfortunately also connected with ongoing exploitation, corruption, and the plundering of riches. In a few surreal instances, when my hobby transmuted into obsession, it has granted me unexpected glimpses into corridors of power, if not movement within them. It is supremely disconcerting to view scintillating jewelry pieces up for auction in a hotel ballroom, surrounded by traders and VIPs, and the next minute read about the latest embargo on conflict stones on your phone. These experiences inspired the creation of the wealthy Tier Dwellers in my novel.

Gemstones also remind us that we live in a universe subject to extreme forces of nature. To extract treasure from the rocky layers beneath our feet, is to enter the realm of various chthonic deities, and tempt fate. The mining company in my novel does not respect such forces. Which is why the asteroid miners in my novel conduct rituals and name their children after rocks and minerals as a form of appeasement. But the miners pay for their employer’s hubris when tragedy strikes.

I also highly recommend a visit to the Earth Gallery of the Natural History Museum in London or to the Smithsonian in Washington, DC. The most striking exhibits are the ammonites and amber specimens. The amber evokes raw honey with its trapped insects, grit, and pollen, and the ammonites are timeless and self-contained in their Fibonacci-sequenced spirals. Gemstones are also artefacts, bringing us into contact with our past and the planet’s deep past.

A writer working in a certain genre is all too aware of its past. The dazzle of preceding works is so bright as to outshine but she sets herself a Sisyphean task to improve on or at least match these past glories. The major sci-fi films hanging over my novel are 2001, Solaris, and Alien but I tried to avoid any throwbacks to my favourites. The goal was to throw-forward as far as possible: via an invented martial art, a sprawling yet claustrophobic urbanscape, and new spins on the science fiction staples of cybernetic implants, forcefields and guns.

In a genre that tends to feature action and explosions, I was seeking to reintroduce a sense of quiet, or disquiet, and a plot that prompts audiences to absorb its implications rather than merely following it. But there’s still action and explosions because it would be strange to not include these in a space opera. It’s all part of the experience and immersion. In gemmology you immerse your eyes and hopefully, in reading you immerse all of yourself.