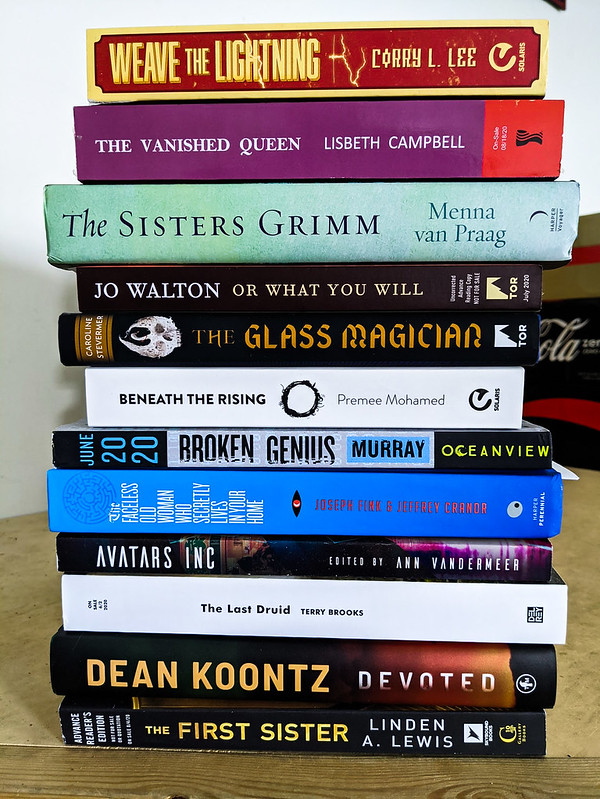 I’ve got two — yes! two! — new book stacks for you this week, to catch up from when I was away earlier in the month. And this is the first one! What here in this group is calling to you? The comments are waiting for your input. 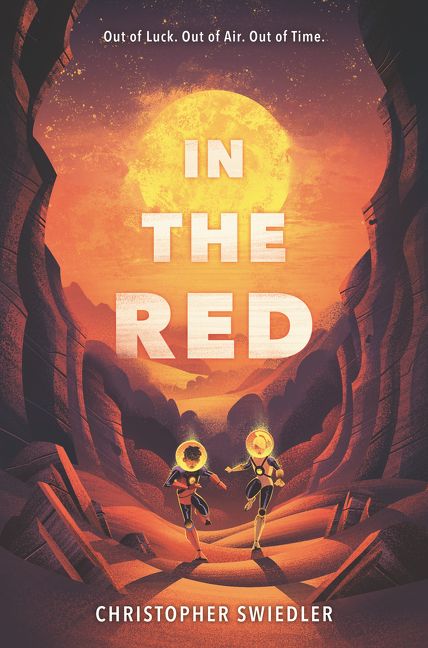 What kind of book is In The Red? As author Christopher Swiedler relates, this seemingly simple question turned out to have a more complex answer than one might assume.

Many years ago, an instructor in a writing workshop asked me whether my sci-fi novel In the Red was for middle grade or young adult readers. My answer was a blank stare, so she helpfully explained the difference. In young adult sci-fi and fantasy, the world can’t be trusted. Darkness and evil are omnipresent. Protagonists fight against the scary things, but even when they win, the balance doesn’t really shift.

I nodded. I’d seen these sorts of books, and they weren’t my thing.

On the other hand, she went on, readers of around eight to twelve years old are optimistic. They still want to believe that the world is good. In middle grade stories, evil, suffering, and conflict are aberrations that can be overcome. Characters know that when they grow up they will be part of a decent, honest, and fair society.

My ears perked up. Optimism about the future? A world that’s positive and trustworthy? I felt an instant connection. This was what I was writing.

My own love story with science fiction began when someone gave me an anthology of Robert Heinlein stories for my twelfth birthday. I quickly devoured Space Cadet, Podkayne of Mars, and every other Heinlein book that I could find. His juvenile novels were written decades before the term “middle grade” was coined, but everything about them fit perfectly into the genre. The stories all had plenty of conflict and danger, but the basic structure of society was always trustworthy. Younger characters had competent, positive role models to look up to. And most of all, the worlds were places that the reader wanted to be.

I explained to the class how In the Red is about a boy named Michael who lives in a domed city on Mars. He wants to join the planetary Rescue Service like his father and spend all his time out on the surface. That’s a little complicated, though, since putting on an environment suit tends to trigger a claustrophobic panic attack that’s bad enough to make him puke and pass out. His doctor has diagnosed him with environment suit anxiety disorder and his parents have forbidden him from going outside the dome, all of which makes him feel like a complete failure. In an effort to prove to them that they’re wrong, he and his best friend Lilith ‘borrow’ a rover and drive all night to his dad’s research station. They have a good shot at it, too—until a massive solar flare knocks out the planet’s artificial magnetic field and all of its navigation and communication satellites, leaving them stranded out in the middle of nowhere with a beautiful-but-lethal sun just about to rise.

The world of In the Red is tough and dangerous, but it’s not evil. Adults are trustworthy. Problems can be solved with ingenuity and courage. I’d been writing a middle grade novel without even realizing it.

“So it’s not a dystopia?” someone in the class asked.

This was the height of the YA dystopia craze, and I could see the disbelief on everyone’s faces. I just shrugged. I wouldn’t describe the world of In the Red as a utopia, but Mars in the twenty-second century is definitely a place that I wish I could have grown up. Domed cities? One-third gravity? Playing with friends, going to school, and living a normal life under a butterscotch sky? Sign me up!

“Is it science fiction like Star Wars?” another writer asked. “Or the ‘hard’ kind?”

This was a much easier question than whether the book is YA or MG. I’ll take a well-written space opera, but my bread and butter is the scientific accuracy of hard sci-fi. Long before a teacher got around to explaining Newton’s laws, Isaac Asimov taught me the principle of “equal and opposite reaction” in Marooned Off Vesta, where the characters melt a hole in a ship’s water tank to use as emergency propulsion. Similarly, the spinning alien spacecraft of Arthur C. Clarke’s Rendezvous With Rama helped me understand how centripetal acceleration works to simulate gravity. These stories gave me a love of science and engineering. I grew up wanting to emulate their logical, intelligent, and scientifically-minded protagonists.

In the Red has its share of futuristic magic bits, like an artificial planetary magnetic field that protects colonists from solar radiation. But I’ve done my best to be accurate about chemistry and physics. The characters use real scientific principles (and a big helping of courage) to escape their predicaments. Michael and Lilith manage to send radio signals over the horizon, plot ballistic trajectories, and navigate on Mars during a dust storm that blocks out the sky. And in my personal favorite bit, a timely application of Boyle’s pressure-volume law is instrumental in helping them escape a rapidly-flooding underground tunnel.

“It’s definitely the hard kind,” I told the class.

The skepticism was palpable. An optimistic-future, hard-science fiction book for middle grade readers? Exactly, I wanted to say. But it’s not as if I’m inventing anything. A half-century ago, Robert Heinlein, Isaac Asimov, and Arthur C. Clarke did all this and more. I’m just following in their footsteps.

Young readers today are living in a radically different environment than the post-war world of sci-fi’s Golden Age. Instead of nuclear war, we now have global pandemics and the threat of climate change. Instead of MULTIVAC, we have computers in our pockets. But hope is just as essential now as it was during the Cold War. If we can’t imagine how our society will get better, then why bother working toward it? If we can’t dream of growing up on Mars, then what chance do we have of ever getting there?

The world that our kids will face as adults is literally the stuff of speculative fiction. They will encounter challenges that we can only dream of. Some young person living today will be the first human to set foot on Mars. Imagination and optimism aren’t enough to get us there—but they’re a good start.