We are heartbroken to announce that the co-founder of @pocketplot and the director of “EC Comics Presents… The Vault of Horror”, William Dufris, has died from cancer.

There is a hole in a lot of people’s hearts right now. We will have more to say later.

William Dufris was a voice actor known for a number of high profile roles, the most famous being “Bob the Builder” from the children’s television show of the same name. More relevantly for me, he was the narrator of five of the audiobooks in the Old Man’s War series (excepting Zoe’s Tale, which was narrated by Tavia Gilbert, who also co-narrated The End of All Things with Dufris). In the last couple of days he passed on from cancer, and I have to say I’m in a bit of shock about it. He did such a good job with the books that the voice I hear coming out of John Perry and Harry Wilson is no longer my own but his.

He will be missed by many, and also by me. RIP, sir.

So, here’s a thing I never expected to see again in my lifetime: A sky entirely devoid of contrails, and the planes that make them. This is a 360-degree “photosphere” panorama from my yard, so the entire sky is here, and not altered from the photo that came out of my camera (I did photoshop the yard, since Athena was in it and she didn’t want to be in the final photo). Minus the curving streaks from the sun that are an artifact of the camera lens, there’s nothing but blue sky.

There’s only one other time in my life I’ve seen a sky like this, and it was in similarly extraordinary circumstances. And just like that time, I am amazed to see the sky of my ancestors. I genuinely never thought it would come around again. 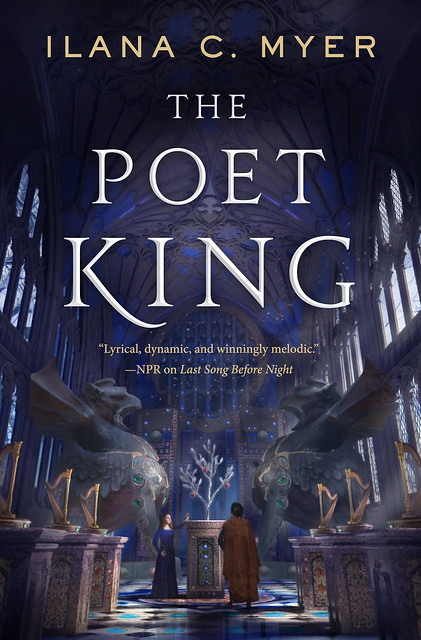 Where some people end their books is where Ilana C. Myer, in her new novel The Poet King, begins hers. Why does she do it that way? She’s here to explain.

Power is something we talk about a lot in fantasy—from rings of power to the One Power to the sword that makes a farmboy a king.

I wrote my first book, Last Song Before Night, intrigued by the idea in Celtic myth of poets wielding magical and political power. Through the eyes of multiple poets, I explored the tension between art and political gain. The path to success for a poet, in that milieu, was by using art to ingratiate himself with authority. And what did that mean for his art?

As the enchantments arise, so do new challenges. The second book, Fire Dance, explores the consequences of accessing enchanted power, on an expanded geopolitical landscape that introduces elements of Middle Eastern magic, Spanish flamenco, and more.

Finally, the last of the series tackles another fantasy preoccupation: The role of a king.

Many fantasies revolve around putting the rightful king on the throne as an end goal. Right at the start of The Poet King, that goal has been realized: A brilliant, charismatic poet has brought about the downfall of a weak king and taken the throne. He promises to bring the realm to heights of glory never before achieved, combining the enchantments of poets with the authority of the crown.

That is, however, the beginning of the story.

As a book where the enchantments of poets come at last to full fruition, at their most fierce, elemental, and dangerous, The Poet King required that I return to the original sources that first inspired the series. In order to write the end, I had to go back to the beginning. There is no roadmap for researching a novel, no syllabus assigned; there is only following one’s instinct. Mine took me to unexpected places. I went as far back as I could in time, to tales so strange to modern ears that even in translation they are nearly opaque. But the enchantment imbued between the lines needs no translation.

Readers will recognize some of the inspirations without difficulty: Arthurian literature, with its roots in Celtic myth, turned out to be indispensable as a source. And then there were other stories, wilder, that perhaps won’t be recognized by most but lent a hand in their own way. An accidentally well-timed trip to Ireland was useful as well, in particular for capturing the atmosphere of Academy Isle in winter. All these roads intersected to lead me to the story I wanted to tell about art, power, and the magnificent king who seems to flawlessly combine the two.

It may sound obvious to say that power comes at a cost, but that hasn’t always been the case in fantasy. Fantasy that relies on flashing wands like laser guns often doesn’t deliver a sense of awe for the forces that are being tapped. As someone who sees magic as analogous to the mysteries of our world, I believe a sense of awe is warranted. I also believe that power should function in fantasy much as it does in our world: Someone will always pay the price.

For me, literature is about the human heart or nothing at all. And there is nothing like a test of character for showing us who people really are.

Coming face to face with what we’re capable of—and what we choose to do about it—is the most meaningful use of enchantment I’ve found.

CoNZealand is making history, as it becomes the first ever ‘virtual Worldcon’, in response to the global pandemic.
For more details, please see our website: https://t.co/7nwfoQFbnH #conzealand #worldcon2020 pic.twitter.com/MNqquHEaIe

This year’s Worldcon is going virtual, because we’re currently living in a global pandemic, and despite what some clueless politicians might say, we’re not going to be out of the proverbial woods by Easter. Moreover, the nation of New Zealand is currently under a stage four lockdown and will be for several weeks, which I imagine makes it very difficult for the Worldcon planners in country to do much of their work. Finally, who knows when international travel will be unfucked. Add it all up, and not only is going virtual this year the best and most responsible choice, essentially it’s the only choice, short of calling off the Worldcon entirely.

For the record, I fully support and endorse the online version of CoNZealand; I plan to attend and, if they want me, will participate in the programming as well. We’re currently in a world that calls for flexibility and imagination in order for people to get together as individuals and communities, and the science fiction and fantasy fandom is one of my communities. This is how our tribe comes together this year, and I want to be part of it. I’m sad I don’t get to do it in the physical New Zealand this year — it’s always been one of my travel goals — but that just means we can visit some other time. This works for me in the interim.

If you were planning or even thinking about going to CoNZealand, I hope you’ll support and attend this version; it will work if we want it to, and show up. I’ll be there. I hope I’ll see you there, too.