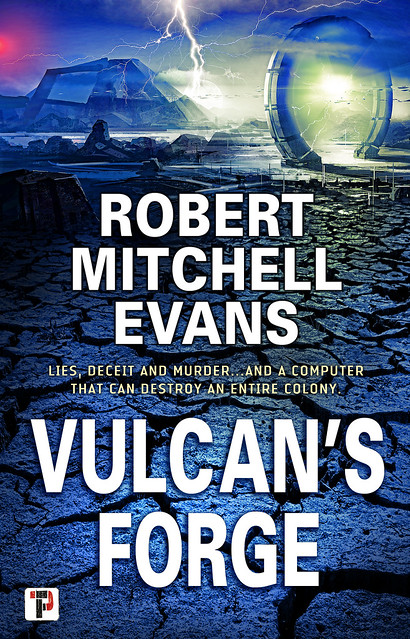 Science fiction writers don’t only grow up on science fiction. Their influences can be all over the map in terms of genre and medium. Just ask Robert Mitchell Evans, who for his novel Vulcan’s Forge has tapped into another rich vein of storytelling entirely.

My twin loves are film and science fiction. Drive-in movies are among my earliest memories. My older brothers, in order to obtain the family car, always promised my parents to take me along and that they would be going to Disney-like movies but invariably we went to lurid full-color horror spectacles. This goes a long way in explaining a great many thing about me. My affection for film noir came many years later when a history of cinema course introduced me to the dark and cynical genre. With Vulcan’s Forge I have fused my passions for movies, noir, and science fiction.

By far, I am not the first to combine science fiction and noir. Hard-bitten private eyes, dogged detectives, and fatales of every kind, produced by terrific writers, are numerous in science fiction but I wanted something else.

Don’t get me wrong, Spade, Marlowe, Hammer, and the rest of those classic characters, both on the page and the silver screen, are great and excellent SF version of these iconic archetypes are wonders to behold but I wanted something more akin to Walter Neff in Double Indemnity or Frank Chambers in The Postman Always Rings Twice, an person that, because they are unable to resist temptation, finds themselves suddenly in over their heads with lust and murder taking over their lives. It took me quite a while to find the characters and plot where everything came together for the kind of SF noir I wanted but eventually I did.

Writing a novel you discover surprising things about yourself and your subjects. Vulcan’s Forge taught me that noir stories besides being about crime and character are also about culture.

Noir characters, the outcast, the forgotten, and the greedy, propelled by taboo appetites, brawl with their cultures. They are characters that fall into crimes chasing forbidden desires and it is their culture that defines those taboos.

Invented cultures fill science fiction. Some are utopian and others dystopian but usually they are already well-established societies with readers meeting them mature and functional. But what about a culture being born? How do you teach a specific culture to a population? What about the people that don’t fit in? These are a few of the questions that nagged at me as I wrote Vulcan’s Forge.

In the backstory, near the end of the 21st century a rogue brown dwarf barreled through the solar system disrupting the planets and destroying the Earth. With decades of warning humanity launched thousands of automated arks loaded with human eggs and sperm, replicating technologies, and artificial intelligences. Advanced automation, the vast resources of the solar system, and artificial intelligences made producing individual arks so affordable so that even sub-cultures could construct their own in hopes of persevering their unique value. The net results were thousands of colonies spanning the vast complexity of human cultures, including somewhere a planet devoted to perpetuating Texas. Propelled by light-sails these arks dispersed through the local stellar neighborhood and a few found habitable planets. The onboard computer intelligences established colonies and with artificial wombs they raised the first generation of colonists — humans who had never have known Earth.

Jason Kessler lives in a colony dedicated to a mythologized view of mid-twentieth century urban Americana. Charged with helping establish this culture Jason, a third-generation colonist, carefully screens curated mass media to create a stolid society morally guided by Doris Day, John Wayne, and Mickey Mouse. However, he is far from ready to settle down to the life of a respectable family man. When Pamela Guest, sensual and mysterious, sweeps into his theater offering him a life free of suffocating societal expectations he leaps at the chance and lands amid corruption, crime, and a conspiracy beyond his petty concerns.

One of the central questions that emerged from writing Vulcans Forge was what does an individual owe their society and what does society owe them in return? To me this strikes at the very heart of what it means to be human. We are individuals with compelling drives to be our own persons and yet simultaneously we are also highly social animals fighting for in-group status. Jason’s desire to live as he wants, forsaking a ‘family life,’ whatever that may mean, is understandable but life isn’t just about selfish wants it’s about ‘us’ as well. One the other hand a culture that demands total obedience and compliance is despotism even if they are operating on a misguided belief that they are serving some greater good.

Vulcan’s Forge forced me out of my writing comfort zone. Noir is a deeply cynical genre; it is base drives that compel its characters. What ‘good’ characters may exist in these stories are often sidelined or ineffectual. None of my earlier novel length fiction embraced such a worldview and I seriously doubted my ability to sustain it. Following Jason as he made mistakes, as temptation overpowered his judgment, and he discovered truths about himself and his world challenged me but I firmly believe that outside of our comfort zone is where creation waits. That’s not to say I didn’t have fun writing this novel. I played games with myself burying references to favorite movies in the narrative. I wrote it ignoring trends and markets. It is a love letter to the shadowed world of film noir and a reminder that even among the stars we will remain our own worst enemy.