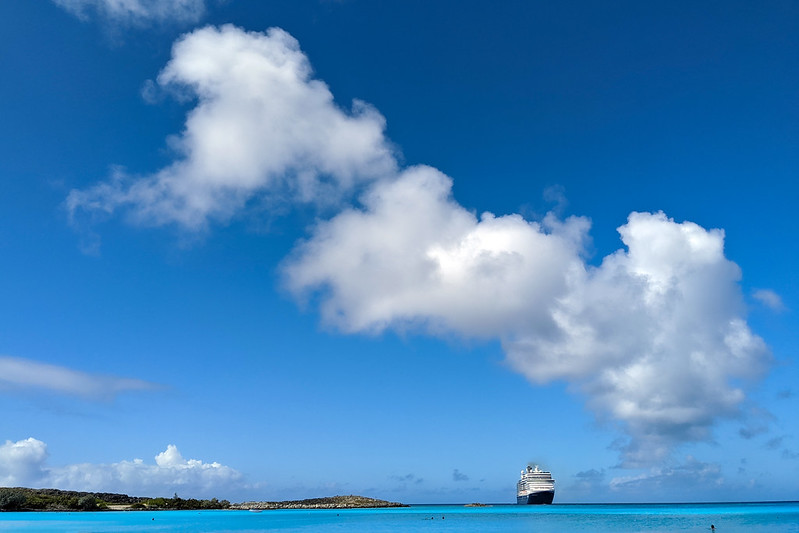 Three fridays ago I was lying in bed on the Nieuw Amsterdam, the cruise ship that the JoCo Cruise was sailing on this year, trying to decide whether or not I wanted to bother to get my ass up, head down to the tender boats and go over to Half Moon Cay, our current stop on the cruise. I’d been there before and it was the last full day of a week-long cruise, and no matter how enjoyable a cruise is or has been, at some point you hit cruise fatigue. I was hitting it. Staying in bed and then wandering around a mostly-empty cruise liner for a few hours sounded like a pretty good day.

Then a thought came into my head: You know what you’re going to back to. Who knows when or if you will ever get back to this place again. Go and swim in the ocean, why don’t you.

So I did. I went and took the tender to Half Moon Cay and hung out on the beach eating ice cream with friends and family, and then jumped into the crystal blue waters of the Caribbean and floated there as fluffy white clouds drifted overhead and my scalp became a rather alarming shade of red. I got out and had lunch with my wife and fed bits of bread to a rooster who knew a sucker when he saw one. Then I jumped back into the water, floated there again and took a moment to be mindful of where I was and who I was there with, and what an actual privilege it was to be afforded this one last best time.

To be clear, six days earlier, as we were boarding the Nieuw Amsterdam, I think most of us knew we were running ahead of a storm. There had been some question of whether loading 2,000 nerds on a cruise liner was a reasonable thing to do at all, given it was clear the coronavirus had landed in the US and was beginning to break out. The cruise line had put restrictions on who could get on the boat based on their previous travel through hotspots, which meant one of the cruise’s performers had to stay off the boat, and the boarding process featured spot health checks of the passengers. Hindsight being what it is, we were lucky that these precautions actually worked as hoped. But we were lucky.

I made a resolution that while I was on the ship I would avoid news and social media. I had email so that if there was a career emergency, my editor, agent or manager could get hold of me, but I had arranged things so that there should have been nothing that would have been an emergency during the week I was on the boat. We had departed on a Saturday; I was fully confident I wouldn’t have to think about the rest of the world until the next Saturday, when we returned to Fort Lauderdale.

In fact I made it until Thursday morning. Wednesday night my editor at Tor sent me an email, which was, basically: You have to call me immediately.

To which I replied: I’m in the middle of the ocean. There are no cell towers here. Just tell me.

He responded in the early hours of Thursday, to tell me that my book tour for April had been entirely cancelled — and not just my tour; indeed, every event for every author my publisher published had been cancelled through April at least.

You have no idea what it’s like now, he told me. Everything’s changed. It’s been four months since last Monday.

And I was all, well, shit, now I have to know. So I looked at the news.

He was right. Everything had changed.

By this time a lot of the performers and passengers on the cruise had also broken their news and social media fasts and were catching up on events in the world, and grasping what we were going to be coming back to when we arrived at port. Most of us also understood our first order when we got back to wherever it was we were going was to put ourselves in quarantine, for our own safety and the safety of others.

Because of that, at least some of us started looking at the cruise in a different light. The JoCo Cruise was always a good time — it’s why it had lasted for ten years and spawned a community that existed outside the confines of the cruise ship — but it was beginning to sink in that this might be the last good time for a while. Maybe for a long while. Or at least, the last good time we could spend with friends in reasonably close proximity, outside of the confines of our own homes.

So we enjoyed it. With the time that we had left to us, we enjoyed our time with each other. Our last best time. Then we came off the boat, got on our planes and came home to where we are now, and to the world as it is now.

We were fortunate. We were fortunate that on a cruise during a viral time, we avoided that contagion; it’s now been two weeks since we returned home, so we’re now outside the understood penumbra of its infection time. If any of us who were on the cruise get sick now, it’s far more likely that we got it here than there.

We’re also fortunate that we got to have this last, best time, with friends and music and laughter and blue skies and oceans to float in. It’s something that will help to sustain us through what we have now, and what is yet to come. 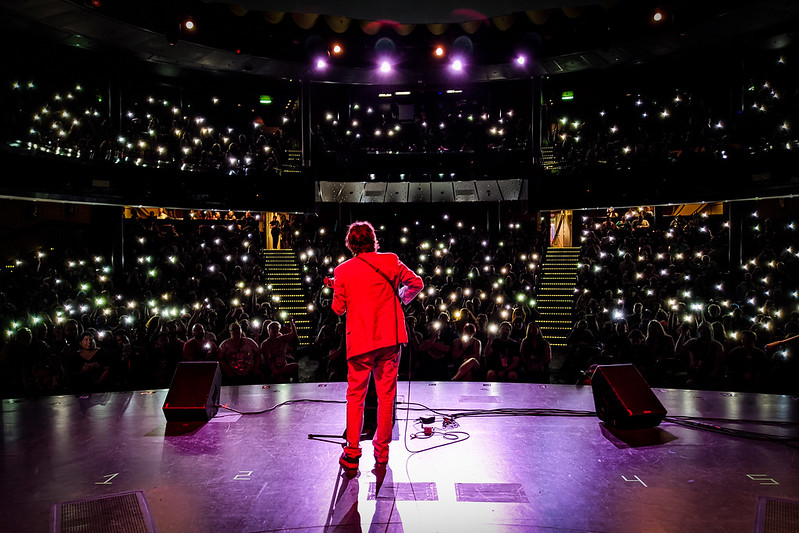 48 Comments on “The Last Best Time”