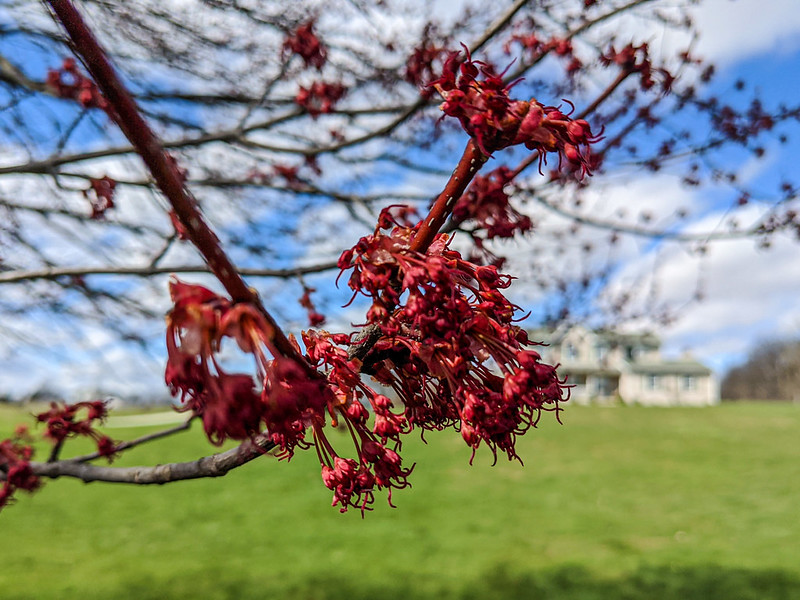 We got back from the JoCo Cruise on March 14, and March 15 was our first full day back in the world, so today marks two full weeks since I’ve basically holed myself up in my house. In the first week back I had two trips out to the grocery store, both observing full social isolation (i.e., at least feet between me and everyone else, no touching), and this week I’ve been off my property exactly once — today, when I went for a long walk down my street, on which I encountered no one because it’s a rural road and no one actually walks it except for me. It was good to be out in the early spring.

And how has this two weeks of (mostly) isolation been? On the whole, for me: fairly pleasant. I’ve mentioned before that when I’m at home, I don’t tend to go out a lot anyway — I can easily go a week or longer without leaving the house or seeing anyone but my family and pets. The two weeks back from the cruise I had nowhere scheduled to be anyway; I was supposed to go somewhere nest Tuesday (that’s now been postponed), but up until then my plan was: Be at home. So in that regard, “self-isolation” has just rather closely modeled what my plan already was.

Likewise with work I didn’t have a lot scheduled for myself — mostly plotting out new work (which is a grand way of saying “staring into space a lot while vaguely thinking of things I might write next”) and preparing for the book tour that was supposed to start a little over two weeks from now. Well, the physical tour is cancelled but we’re actively replacing that with online events, and also I have been plotting out that new work, so while some things have shifted, essentially I did what I planned to do with this time, i.e., mostly nothing, but a little bit of something.

Moving forward, plans have changed a bit, of course. I was planning to continue a relatively light work load through the length of my tour, because tours are busy and also enervating. Now that there’s no physical tour, I plan on being a little more serious about daily work, starting this next week. When I say “a little more serious” I should note that I’m planning to be careful not to overschedule my workload. This self-isolation thing I’m doing is very much like my normal routine but these are very much not normal times, and while for various reasons I’m probably better insulated from the world’s woes than most people, I’m still feeling the stress. My daily work goals are going to be modest to start and then we’ll see what happens from there. The point for me is to start up daily work again, and to start filtering out the outside world during work hours (or at least until I meet my work goals for the day).

Between now and the end of May I have exactly two places I need to be other than home: I need to take a day trip to Michigan to sign copies of The Last Emperox at the Subterranean Press warehouse, and I need to go to Jay and Mary’s bookstore here in Troy to do the same thing. I’ll do those in the next couple of weeks (provided I’m allowed to travel to Michigan at all — state-to-state travel is becoming a weirdly testy subject these days). In both cases I’ll be very sure to observe appropriate distancing.

Beyond that: Well, I’ll be here, with family. And cats. There are worse fates, to be sure.