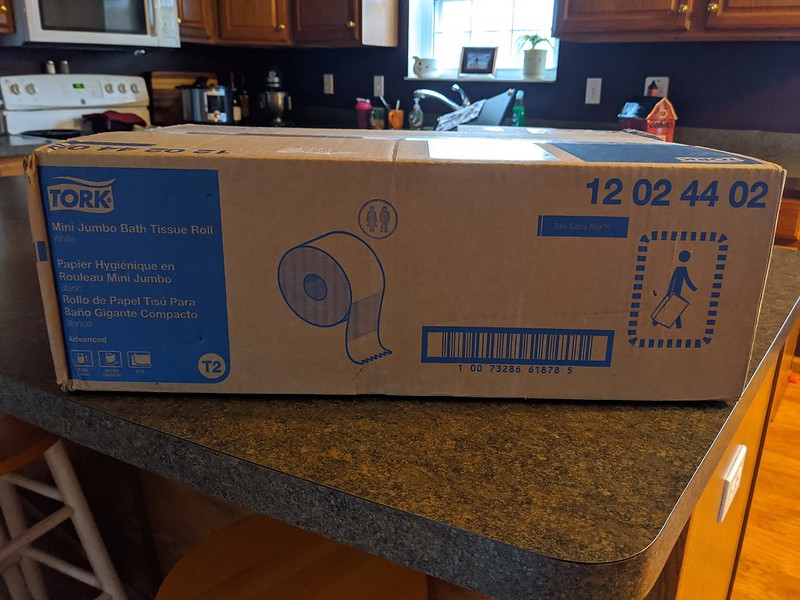 Last Thursday Krissy, who has been appointed the Person Who Leaves The House to Shop, reported that once again she had been unable to find toilet paper, or paper towels, while she was out shopping. We had been back from vacation for nearly two weeks at that point, and the Great Toilet Paper Panic of 2020 had begun the week we were on our cruise. So that meant it had been three weeks since toilet paper had been readily available locally — every roll snatched in a panic. Here at the Scalzi Compound we were doing okay on the toilet paper front, with enough to last us a couple more weeks if we were not, shall we say, profligate in our usage. I had assumed that at some reasonable point in the future the stuff would be back on the shelves. But here we were, three weeks in, and the shelves were still bare.

Which was how, last Thursday afternoon, I found myself on Amazon, finger hovering over the “buy” button for a box of Tork brand toilet paper — the stuff you find in airport bathrooms on massively-sized rolls, and which is unperforated because it’s assumed you’ll rip it across the serrated edge of a Tork brand toilet paper dispenser. This industrial-grade toilet paper was, literally, the only toilet paper available online — not just on Amazon, mind you, but on the sites of Kroger, Wal-Mart, Home Depot, Lowe’s, Walgreens, CVS, Staples, Office Max and even Jet.Com. Uline claimed to have some, but it was rationing orders and was additionally limiting them to customers who had accounts before January 2020. Everywhere I looked, toilet paper wasn’t, except for these 12 boxes of Tork Mini Jumbo Bath Tissue Rolls (12 rolls each), which had somehow managed to escape the view of the ravening hordes, on Amazon, of all places.

As I was considering the purchase, part of my brain was going, come on, this is ridiculous. But between the moment I added a box of the stuff into my shopping cart and the moment the Amazon shopping cart page popped up, five of the boxes of Tork Mini Jumbo Bath Tissue Rolls (12 rolls each) sold and only seven boxes remained. Suddenly it became a lot less ridiculous. I put my order through.

When I got the little confirmation notification from Amazon that indeed my order had gone through, I felt three emotions, in rapid sequence. First, smugness: Fuck you all, I and my family will still get to poop. Second, enraged exasperation that a virus had reduced a once-great nation into a fearful panic-buying rabble, grabbing onto rolls of toilet paper like 2-ply security blankets, perhaps thinking if I can poop like a civilized person maybe this pestilence will pass over my home. Third, a mild but nevertheless disquieting sense of shame, because, after all, if I didn’t myself just panic buy some toilet paper — any toilet paper at all, as evidenced by my willingness to claim unperforated industrial tissue — I at the very least bought it at an elevated level of alarm. It was not, I admit, my most dignified online purchase ever.

And as it turns out, not an entirely necessary one, either. Yesterday Krissy went to Sam’s Club, which had more or less at that moment brought out onto the sales floor a pallet of 45-roll packs of the quilted good stuff. Krissy scored one package — just one, one is more than enough for a three-person home for a very long while, thank you very much — and a similarly-sized package of paper towels. When my box of Tork Mini Jumbo Bath Tissue Rolls arrived this afternoon, it was thankfully superfluous. It has therefore been dispatched to the basement, where it stands as our Strategic Reserve, at the ready should the stores once again be depleted through the panic buying of others, or in case of natural or other disasters depriving us of easy access to the sort of toilet paper that features cartoon bears on the packaging. It is the toilet paper for When It Comes To That, in other words, and let’s hope that it never does.

I’m writing this all in a light, jokey manner, but I’ll note that underneath this jocular tone is a mild bit of shock that, in fact, it took two fucking weeks for Krissy to locate toilet paper anywhere within a 50-mile radius of where we live, and that my grand backup plan to deal with this was to haunt the commercial sites of the Internet and grab the first box of the stuff I could find, regardless of quality or, indeed, perforation. I’ll note that at this moment on Amazon, the same box of Tork Mini Jumbo Bath Tissue Rolls I bought will set you back $100 (which is rather more than what I paid for it), and it will be at least two weeks before arrives. Try Sam’s Club first.

My point here is we’re none of us doing a very good job of not freaking out, and I worry about how much worse it will get before it gets better. I don’t have an answer to this. But at the very least, we’re not going to panic buy (or hopefully even mildly alarmed buy) any more sundries. For the duration we’re going to buy as we normally did in the Before Times, and if that means sometimes we do without — as it has already for a couple of other things besides toilet paper — then we’re going to work with that, and around it, and through it. We’ll get through all of this, all of us. We just have to think about all of us, and make room for the rest of us, too.

Also, when all of this is said and done, I’m finally getting myself a bidet. All of those are on back order too, at the moment. Who would have thought.

82 thoughts on “The Strategic Reserve”