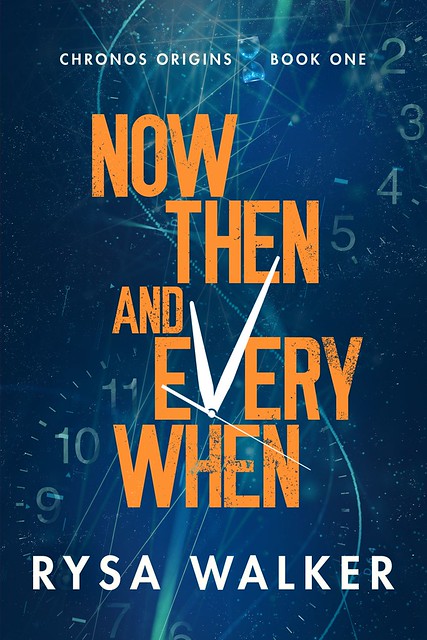 Hold on to your butts: in this Big Idea for her new novel Now, Then and Everywhen, author Rysa Walker eyes the topics you’re not supposed to talk about… and then totally goes there.

There’s an old adage that you should never discuss politics or religion in polite society. If that still holds and it’s something you believe strongly, consider this a warning: I’m about to discuss religion and politics.

I’ll start with an anecdote you may have heard. Two science fiction writers are at a bar in the late 1940s having a friendly chat over a few too many drinks. After a shared lament about the penny-a-word rates they’re earning, one of them notes that they’ll never get rich writing science fiction. “The real money,” he says, “is in religion. I’ll bet I could start my own religion and be a millionaire long before you make that much writing.”

There are multiple versions of the tale, some with the wager and some without. I won’t name the authors in question, both because the story is quite possibly apocryphal, and because even though the undisputed winner is now dead, he left behind a very profitable (and very litigious) church.

While we may never know whether the story is literally true, it’s hard to deny the central point. In the US, tax breaks alone tip the scales in that direction. Most religious leaders also wield far more political power and seem to provoke less anger when they dare to express a political opinion in the course of their work… even though their tax-exempt status should, in theory, preclude that.

Personally, I’d rather write even if it never makes me a millionaire, but religion still intrigues me. I was raised in a rural area of the South so deeply fundamentalist that I was nine years old before I fully understood that religious beliefs extended beyond the narrow spectrum of Protestant churches lining the highway that bisected our tiny town. I met my first non-Protestant around age twelve when a Catholic family moved in, and my first non-Christian when I went away to college, although I’m sure there were a few atheists in town who were simply smart enough to keep their mouths closed on the subject.

My own religious views took a sharp turn as a teenager, when a chance encounter with Mark Twain’s Letters to Earth awakened my inner skeptic, and also because I began questioning the racist views of my particular denomination and chafing at the whole women be silent thing. (Which will surprise no one who knows me.)  But I still have a certain affinity for the more positive messages of the New Testament and fond memories of sermons at my grandparent’s church, where the minister focused on the golden rule and charity rather than the eternal damnation of anyone who held different beliefs.

Given my previous career as a professor of government and history, I’ve had a chance to explore many of the intersections of religion and American politics. The most baffling combination, in my view, is the odd meshing of Ayn Rand’s loosely organized political theory and fundamentalist Christianity. There’s really no overlap between her philosophy of Objectivism and the words of Jesus in the New Testament. Indeed, they’re close to polar opposites. Yet somehow, prosperity gospel ministers manage to blend these into a message that resonates with many Americans. See me? I’m rich. And if you send me your love offering…or seed money…or sustaining gift…you can be rich, too. God wants you to be rich.

To put it in the context of our two science fiction writers in the bar, let’s imagine that the religious entrepreneur has more than drive, charisma, and an active imagination. Now he also has the ability to jump back a few centuries and drop off copies of the central text of his new religion, avoiding that whole awkward phase when established religions dismiss it as a cult. Since he wants his religion to become mainstream, he probably would not introduce an entirely new theology with aliens and the like. He would, instead, follow the lead of Christianity in its early days, blending his ideas with customs already embraced by the people he hoped to convert. At various junctures in history, he might also make a few stops to deliver a  well-timed prophecy, perform a miraculous cure, or co-opt a few rival groups. And once he reached the modern era, he could spread his new religion rapidly by providing the faithful with the occasional uncannily accurate stock tip—as long as they kept up their monthly tithe, of course.

A similar wager sets in motion the events in both of my CHRONOS series. The main antagonist, Saul Rand, is one of three dozen genetically altered historians equipped to travel through time to study their subjects in person. There are safeguards, of course. Rigid controls on when and where the historians can travel. And the Temporal Monitoring Unit is there to ensure that the historians don’t alter the timeline enough to affect the course of history. Saul has found a way around those safeguards and he’s convinced that a world crafted in his own image would be an improvement.

If the original wager in the bar was tilted in favor of the wannabe messiah, adding time travel makes it a slam dunk. And once his new religion was widespread, it would give him a tremendous amount of power to change history. Whether that was for good or for ill would be largely determined by the personality of this new prophet…although I think it’s fairly safe to say that anyone with the hubris to think that he or she should have the ability to shape all of history is not someone you’d want in that role.