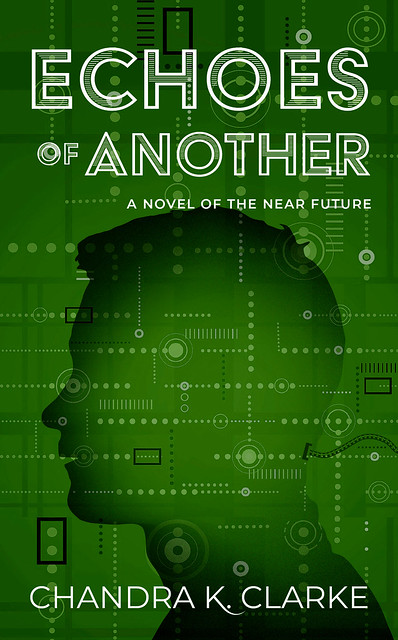 In a world that’s full of dystopias and which frankly feels more than a little dystopian itself these days, Chandra K. Clarke asked: Is that all there is? Her novel Echoes of Another is her way of trying to answer that question.

One of my favorite Sidney Harris cartoons is one you’ve probably seen: it shows two mathematicians staring at a complicated equation on a chalkboard. In the middle of the equation is the line “THEN A MIRACLE OCCURS.” In the caption, one mathematician advises the other, “I think you should be more explicit here in step two.”

I think of this cartoon nearly every time I rewatch some of the earlier incarnations of Star Trek, as it reminds me of how I felt the first time I watched The Next Generation (TNG). Like many of you, I loved it for its optimism, its fumbling steps toward the concepts of diversity and inclusion, and the fact that it (usually) embraced thoughtful, reasoned approaches to problems. But after watching an episode, I would think to myself, Great! Love it! Want it! Uh . . . how do we get there from here?

That niggling feeling has only gotten worse since the TNG series finale in 1994. In real life, we seem to have entered a backsliding period or, at the very least, a retrenching: demagogic leaders gaining power all over the world, progressive legislation being rolled back, and nation-states withdrawing from collaborative agreements. And science fiction, the literature that had once inspired me to keep winding the clock now seems awash in more of the same: dystopias, post-apocalyptic landscapes, and zombies. Lots and lots of zombies.

(And yes, I’m sure you can think of at least a dozen examples of more positive SF, just as I can Google for encouraging headlines. I’m talking overall trends. Work with me here . . .)

That feeling was compounded by a sense of wasted potential, especially with the stuff coming out of Silicon Valley. When tech bros weren’t burning tens of millions of dollars on dubious inventions, such as Wi-Fi-enabled juicers, they were launching massive, disruptive “platforms” that had the capacity to be positive socioeconomic forces, with little thought (or care) for how they might be abused. Where it once it felt as if we were on the verge of some big breakthroughs and substantial progress, we now feel as if we’re scrambling to avoid disaster while fighting a rearguard action.

My response to this was to write Echoes of Another. In it, a well-meaning scientist invents a technology that can record and play back the neurological and physiological states associated with “flow”—that rare but lovely state of total focus and peak performance. She wants to be able to invoke flow on demand so that humanity can bring peak states to bear on our biggest problems. But before she’s able to do much with her prototype, it is stolen, copied, and put to a range of uses, both good and . . . well, really rather bad.

My goal in Echoes was to explore the wild and weird ecosystems that spring up around any new technology, as well as the unintended consequences that always follow when you don’t factor basic human nature into your cool new toy. While I’m at it, I try to subvert some tropes, because I’m contrary that way.

More importantly, I tried to position the novel in a cautiously optimistic time and place. Set in Toronto, the near-future that I want is one in which we’ve come to grips with climate change mitigation, we’ve made solid progress in decarbonizing the economy, and the long arc of the universe is bending once again toward justice and equality. It’s certainly not perfect. But it is, if not a midpoint, then at least a stepping-stone on the path to a rosier future—something akin to the one depicted in TNG.

That’s because, for my money, science fiction’s highest and best use is to inspire people to think about the future they want. Don’t get me wrong: dystopias and other cautionary tales are absolutely vital. We need to explore the ways in which things can go wrong so we have an opportunity to avoid bad situations in real life. But there are two sides to the SF coin, and we’ve been getting tails for too long. We’re at the point where social media pundits are nervously wondering whether certain politicians are using dystopias as playbooks. And I do believe that if our art is as relentlessly depressing as our headlines seem to be, we risk invoking a kind of paralysis because there seems no point in trying.

I would love more SF that encourages us to actively chart a course into the future, rather than stumbling blindly into it; helps us come up with thoughtful, reasoned approaches to our current problems; and gives us something to shoot for, not just shoot at.

Echoes depicts a fictional future that I think could be within our grasp. I hope it inspires you to create a real one that’s even better than what I have envisioned.