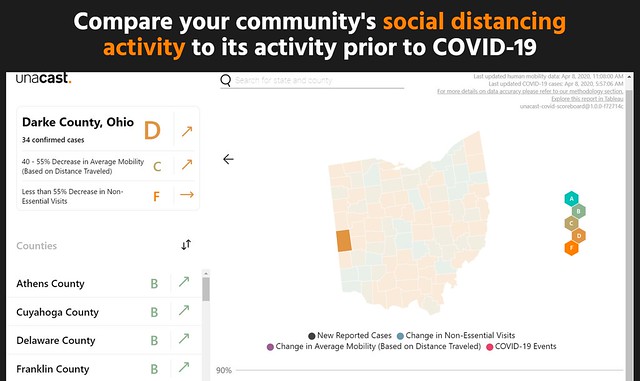 There’s a site that purports to track how well one’s county is following social distancing protocols, and I was curious how my own county was doing in their estimation, so I put it into site. Turns out, Darke County, OH is not going all that great: It has a score of “D”, meaning that people are on average still moving about quite a lot.

Why might that be? One easy assumption is that it has something to do with ideology; a quick look at the county map shows that the areas that have better social distancing scores tend toward to be more liberal/Democratic, while the ones doing less well are more conservative/Republican. And while I think there may indeed be something to that, I think there are more practical issues at work. In Ohio, at least, the counties with better social isolation scores are also ones with more white collar jobs, i.e., jobs that can be done from home and in social isolation. Meanwhile, rural counties like Darke county have more blue collar and agricultural jobs, including ones deemed “essential,” which require more mobility on the part of the population. Additionally, things are further apart in rural counties — a trip to our “local” Kroger, for example, is 10 miles each way.

Which is to say I don’t think Darke County’s low score here is just a matter of stubborn people not thinking through what social distancing is, although again, I wouldn’t count that out entirely — one persistent rumor around these here parts is that the COVID-19 bug actually came through here weeks ago, so the area should be on the other side of its infection curve, which is a belief that bears no relation at all either to epidemiological trends or, frankly, common sense. People should still be at home. But at least some of that score reflects who lives and works in this county and the practical issues of living and working here. It does give some credence to the idea that to no small extent, the ability to socially distance is a mark of privilege and class.