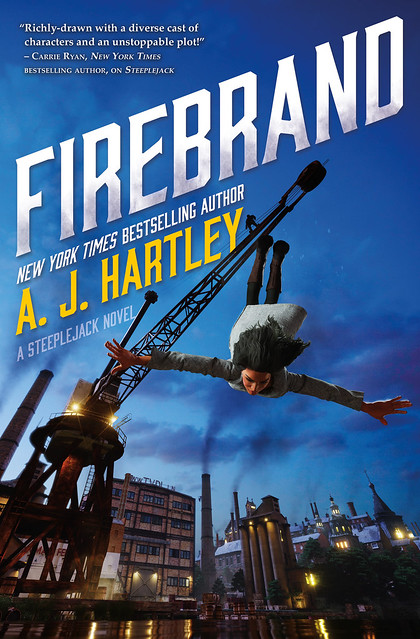 A book doesn’t have to have a single big idea — it can have ideas of all sizes, combined to make something new. A.J. Hartley had a few ideas for his “Steeplejack” series, of which Firebrand is the second, and today, he’s here to explain them, and what he’s done to make realize these ideas effectively.

The core of the Steeplejack series, the idea at its heart, came out of the collision of two smaller ideas that I had assumed would be separate books. One was a fantasy adventure set in a world which looked like Africa. The other was a Victorian steampunk mystery centering on a character who worked on the city’s tall factory chimneys. When I realized that the two stories might be combined, creating a unique, 19th-century metropolis within an African context, the series came together. The result was not just a world that had all the smoggy trappings of a Sherlock Holmes mystery surrounded by a wilderness full of strange and potentially dangerous creatures, the story was also necessarily defined by the racial dynamics of the population. Bar-Selehm, the city which is the home for the books, is based very loosely on Durban in South Africa, a city with a substantial Indian population in addition to the minority white and indigenous blacks. Since I imagined a conquest of the region which took place several centuries earlier than did the British subjugation of South Africa, however, the imaginary city is a steam-driven industrial power house living according to a political system resembling apartheid.

The protagonist of the series is Anglet Sutonga, a brown skinned Lani steeplejack who, in book one, was recruited by a powerful local politician to investigate the events surrounding the murder of her apprentice. In book two, Firebrand, she has acquired greater autonomy and agency, and is now attempting to unravel the theft of some secret government plans against a backdrop of rising political tension. This latter is driven by the rise of a right wing populist politician who is seeking to return the city to older ideas of racial segregation in response to the recent immigration of foreign refugees fleeing their war-torn homeland.

I should say here that I’m a white guy, and that with the best will in the world, there are certain things I’m never going to be able to evoke as well as a someone who has actually lived the experience. That’s worrying for a writer. We’re told to write what we know, and limited though that injunction might be, it’s solid advice if only because when readers can tell you don’t know what you’re talking about, you’re screwed. At best they are momentarily knocked out of the story. At worst you lose them completely and you look like an imposter.

That said, the world is full of books about white people and I didn’t want to merely add to the pile. I’ll go further and say that I think I have a moral obligation to at least try to write stories which reflect the diversity I see around me.

But the road to hell is paved with good intentions and it’s not enough to mean well. Now, I’m on safer ground with fantasy. The world of the Steeplejack books is made up. It’s a place and time that has never existed, so I’m as well qualified to write it as anyone else, but to do it well requires me to draw on other people’s experience. I’ve been to places, for instance, where I knew I could not trust the police, that if anything happened to me—or even if it didn’t—they would be as likely to treat me criminally as they were to help. But I haven’t lived the bulk of my life in such a condition, so to imagine it I needed to listen to those who had. I shared my work as it developed with friends of color and asked them to flag any moment, any idea, any assumption which felt wrong, off, or stereotypical. Because one of the hardest things about writing people who aren’t you is the tendency—usually one you can’t see—to rely on what you think you know but which is actually coming from impressions shaped by your own difference. This is especially true when you are representing minorities who, perhaps, you don’t have much close personal contact with, so that your impressions of them are absorbed largely through, say, TV and film.

Writers live by their voice; the sound they make in a reader’s head through the arrangement of words. I like words and I like to use them to build stories. What I learned from this series, however, was that I was likely to be most successful if I shut up and listened. I’m not talking about writing dialect (a nightmarish trap for white people trying to write people of color), I’m talking about story. I’m talking about events and situations and how characters other than me might perceive them. And it’s hard, because you really do have to pay attention when people call you out for an assumption or something that looks prejudicial. You can’t say ‘But that’s not what I meant!’ Intent doesn’t matter. Effect does. So for all my writerly scribbling there comes a point (or points, plural) where I have to share my stuff and ask other people how it reads to them.

Does it work? I’m not certain. The result is better than me working alone, that’s for sure, and I think there’s value in any good faith attempt to talk across racial lines because we, as a culture, seem to be so bad at it. I know I can’t please everyone—from either end of the political spectrum—but that doesn’t mean I shouldn’t do everything in my power to get it as close to right as I can.

It’s probably self-evident that I wanted to use the fantasy frame to explore current social and political issues, mixing adventure, mystery and wonder with some fairly hard truths from our own world, but I don’t think I had realized just how topical it would feel. The novel was completed long before the last presidential election, and though there are flashes of campaign rhetoric in the mouth of Anglet’s principle political antagonist, Nathan Richter, the extent to which the book now seems to reflect our own country is a little unnerving. In fact, in spite of the unfamiliarity of the world and its occasional deviations from conventional reality, it barely feels to me like fantasy at all. All of which makes me wonder if the real ‘big idea’ has to do with the book’s generic hybridity; it’s a mystery, a thriller, and a fantasy adventure, but it’s also a kind of alternate history with an edge of social commentary. I like to think that it’s both fun and serious, both a diversion from reality, and a story about political resistance in a world which seems rather more familiar than I would like.

One thought on “The Big Idea: A.J. Hartley”