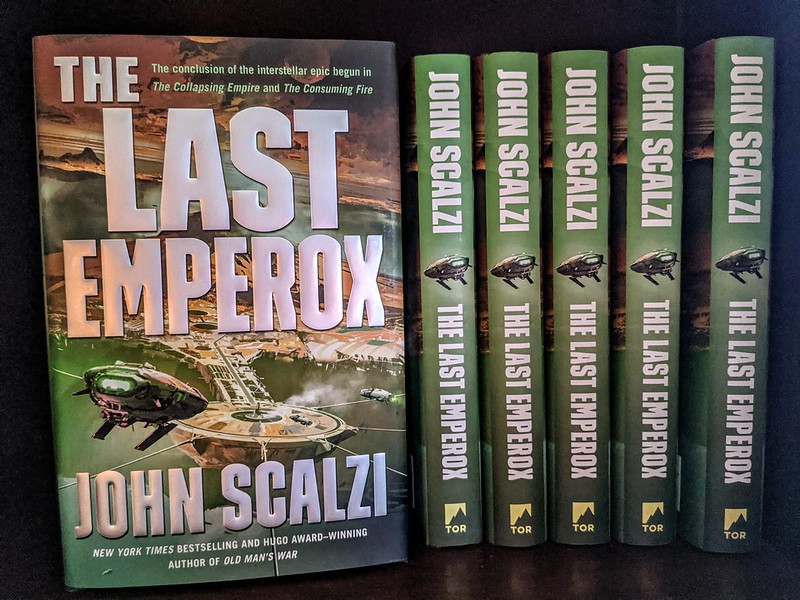 Because I have them! And this is my site, where I can talk about them! In no particular order:

* I’m still a little stunned by where Emperox ended up on the NYT list. Bluntly and honestly speaking, given the global pandemic, which makes the getting of books rather harder than it usually is, I had pretty much written off being on the NYT lists at all this time around. Then the early sales reports came in, and I was all, okay, this looks good, but don’t get ahead of yourself, bucko. And then shortly after 5pm yesterday (which is when the lists get sent off to publishers), I got an email from my editor, Patrick Nielsen Hayden, subject line of which was, simply, “DUDE.” And then I was finally, okay, maaaaaaaybe. But at that point I was still expecting possibly something like #15, which is where The Consuming Fire had landed when it came out. So getting to #6 was… unexpected.

And also, as I discovered when I suddenly had a huge adrenaline dump of relief after seeing the number, something I had been denying to myself I had been worried about. Because, you know, look — if you ever get to the point where you expect to show up on a best seller list as a matter of course, you might need to calm your sassy boots down a bit. At the same time, the previous books had done well, and it’s okay to hope that your work finds an audience, even (and especially) in a rough moment for the world. I wanted the final book in this trilogy to do well. And it did better than I expected, by… well. By a bit.

I have to say in the moment, I was completely and giddily uncool about it, which is to be expected because I am completely uncool generally. Krissy was tolerantly amused with me for most of the evening, which is also to be expected. But, hey, as an author, if you can’t lose your shit about a top ten placing on a New York Times best seller list, when can you? You should never expect to land on that list. But when you do, it’s okay to geek out about it.

* Especially as a science fiction writer, I have to say. A quick check of the NYT Hardcover and Combined Print & E-Book Fiction lists shows that three science fiction books have debuted on those lists so far this year: The Rise of Skywalker by Rae Carson, Agency by William Gibson, and then mine (Margaret Atwood’s The Testaments is also about, but it debuted last year). There’s been rather more fantasy books, including N.K. Jemisin’s The City We Became, and Sarah J. Maas got to #1 on both lists with House of Earth and Blood. And it seems certain that other science fiction will hit the list later this year. But for now, in 2020, it’s the most popular science fiction franchise in history, an acknowledged Grand Master of the genre, and me! I can live with that very fine company. Also, Rae and Bill and I thank you for your support.

* Now, in the interest of nitpickery, let’s acknowledge that placement on the NYT lists is both a combination of book sales and also whatever strange alchemy the NYT uses to judge what books qualify for its lists, and also that best seller lists aren’t just about numbers sold but also numbers sold relative to other books in a particular time frame. In another timeline, where there isn’t a global pandemic and everything went as we more or less expected things to, Emperox might have placed higher, or lower, or not at all, depending on how well other books did according to the NYT criteria. It’s useful to acknowledge that.

This is why it’s nice that to have the NYT ranking supported by positioning on other lists; for example, the #14 slot on the USA Today list, which uses a different criteria entirely (it covers all frontlist books, which is why on that list this week, the book at #13 is an Instapot cook book), or the Apple Books Science Fiction list, which covers titles sold via the Apple Books store (Emperox at #1! Also, The Collapsing Empire at #9 and The Consuming Fire at #12!). The National Indie Bestsellers Hardcover list has it at #28, which suggests that Emperox probably sold more in eBook than hardcover, which is supported by the book being on the NYT Combined Fiction list but not the Hardcover list. Other best seller lists will come in through the week and month, which will give us a triangulation of the books’ sales profile.

* I also know the first week sales numbers from Tor for additional context. As noted earlier, it did better out of the gate than either Empire or Fire. Which is great — If you have a trilogy of books, you want the last book’s numbers to reflect the pent-up excitement of the readers, rather than, you know, them going “Oh, that series, I guess.” I suspect it also helped that we primed the pump a bit earlier in the month with a one-day giveaway of Empire and a one-day $2.99 ebook sale of Fire, and had some good early promo via NPR and other outlets. Those starred and other positive reviews didn’t hurt, either. PR and marketing matter! No matter how you slice it, however, the book did what it was supposed to do, in terms of sales and presence. Hopefully it will continue to do so as we go along.

(“It was a good book, too!” Some of you will say (and have said already, thank you). And yes, it is. I was very pleased with the book for itself and how it fit into the series. But here’s the thing: The book being good or bad doesn’t mean that much for the first week sales for a third book in a popular series, or for the first week sales of a popular author. There is usually sales interest in those cases regardless. Where it being a good or bad book matters for sales is in weeks two through infinity — because that’s where word of mouth and other factors that contribute to “long tail” sales kick in. A book being good is the difference between the first week being 50% of a “bestselling” book’s lifetime sales, and it being 5%, or even a smaller percentage than that. As authors, we should all hope for the latter.)

* So, yeah, basically I was surprised and relieved and happy that The Last Emperox had such a good first week. And maybe you think it might be silly for me after all this time to still have those jitters, but — I still have them! Especially in the face of a global pandemic! This is completely uncharted territory to release a book into. Literally no one in the publishing world had any experience with something like this, or knew how to predict the effect it would have on a new book coming out. In a whole lot of ways, for Tor, and for the genre of science fiction, I got to be the proverbial canary in the coal mine.

The verdict: We’re not dead yet! And we may even get through this. If we do, it will be because of all of you. Thank you again.