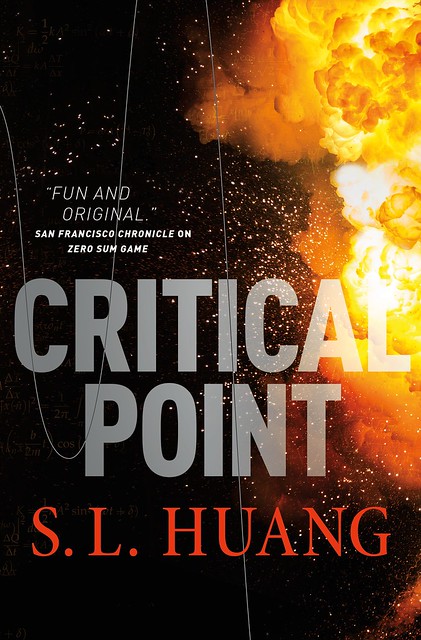 Characters these days often have extraordinary abilities that make them seem almost more than human. The protagonist of S.L. Huang’s new novel Critical Point has one. It may not be the one you expected.

I’ve always been a nerd. By middle school, I had all the Star Wars movies memorized, was making jokes about mathematical limits, and wore T-shirts with Maxwell’s equations. And, like many nerds, I’ve always wanted superpowers.

I mean, who doesn’t? Superpowers would be awesome.

I’ve also always been athletic, but I tended to be better at math than, say, softball. Somewhere along the line, it started to feel grossly unfair that I could do all the calculations for hitting a home run, but I couldn’t actually do it. I could know exactly the initial velocity I needed over the precise range of angles, and then solve for the force in the collision of bat and ball—clearly that meant I should be the most amazing batter ever! Or gymnast, or martial artist, or skydiver…

And not just math. Learning the science behind combustion should totally let me become the Human Torch, right?

What if, I thought—what if being a math and science nerd meant being able to do literally anything one could calculate? What if understanding the theory was all it took to be an expert in the practice?

I ended up learning martial arts and swords the old-fashioned way—through annoying amounts of sweat and hard work—and meanwhile went to MIT to study math. In my heart of hearts, though… I still only wanted to pretend to have superpowers.

So after graduating, I moved out to LA to become a stuntwoman.

Working on film and television was a nerd dream come true. It’s like LARPing on steroids—and with really talented professionals helping you get all the cosplay right! My very first stunt job was on Battlestar Galactica, and as someone who was already a diehard fan of the show, I had to work hard to stay professional and not go around creepily petting the set. As it turns out, there’s a lot more math and engineering in stunts than you might expect—riggers rattle off instant trigonometry on the fly as they set up wire work sequences, or invent new ways of using equipment from other industries to drop cars or cannonball people into the air. But as a performer, I continued to train in all sorts of new physical skills on a regular basis, and every time a new trick eluded me, I’d remember that old wish—if only I could assimilate it all, Matrix-style, just by being able to do the math.

I’d long been writing stories on the side, and this idea wouldn’t stop nibbling at me. Meanwhile, I was having some of the most brilliant and seedy adventures running the gamut of LA’s film scene, where I worked with old cowboys, drag racers, off-the-wall explosives experts, and—on some memorable occasions—people who were a bit too unconcerned about the law. I learned how to play hardball on money, how to jump off a twenty-foot building, and how to keep an M16 clean in the desert. And at some point, this very old idea of mine clicked with all the new life experience.

I could write a protagonist so good at math, so good at doing calculations in the moment, that she could not only hit home runs but take down armies of grown men. I could make her the snarky antiheroine of a fast-paced scifi thriller and drop her right in all the sleaziest parts of LA I knew too well, and give her every physical skill I’d seen an ex-Olympic gymnast or ex-professional athlete do during one of my normal days at work.

Because she could do the math.

Because math would be her superpower.

At the time I was writing it, it took a little courage to make my main character a woman, even as I was working as a weapons expert and had become the first professional female armorer in Hollywood. Nowadays, because she’s a small nonwhite woman and so am I, people often ask if my protagonist is based on me. “I hope not,” I always say with a laugh. “I hope I kill a few less people than she does!”

I’m rather bubbly and nice in person, so no, she definitely isn’t based on me. Her powers, though… Her powers are totally wish fulfillment.

These books became my love letter to mathematics and geekdom, but also my love letter to Los Angeles, even all the parts of it that were less than kind. All the things that shaped me. And that’s especially true in the book coming out today, Critical Point, which is the third book in the series. From book 1, Zero Sum Game, we’ve learned of not only my main character’s powers, but all the other people in this fictional world who have unexpected abilities, too. Not only science and math, but any other mundane skill you might imagine, all as otherworldly powers—to become superheroes, and supervillains, or somewhere in between. Telepaths, fighters, cultists, healers, hackers. And here in book 3, we’re going to get hit with exactly what kinds of impacts these superpowered people can have upon the world, if they so choose.

It’s not like one terrible person with a cult of personality would be able to sway global events in reality, right? Right?

On a more giddy and delightful note, there’s another reason Critical Point is a culmination of all my math-backgrounded movie gallivanting. Let’s put it this way: in my head I call this book “the one with all the explosions.”

So, so many explosions.