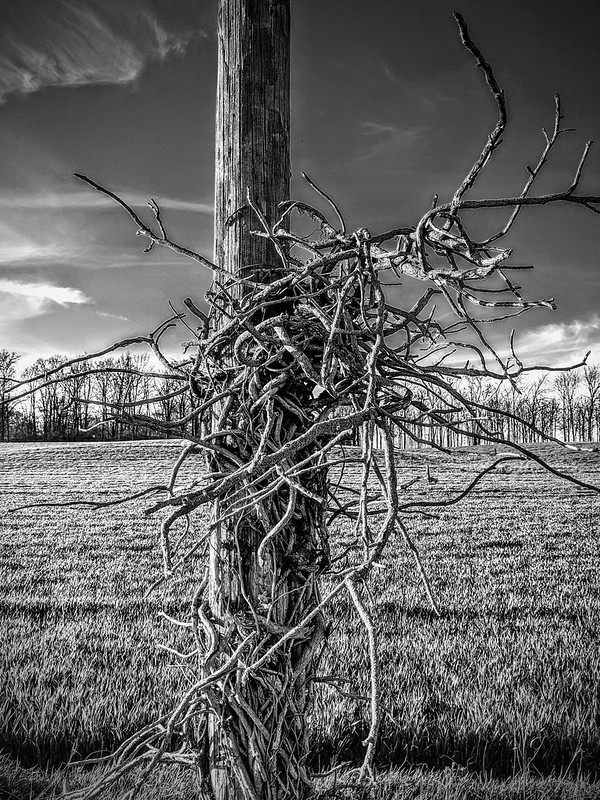 We’ve reached the “Take Arty Black and White Pictures of a Telephone Pole” stage of the quarantine, so, you know, well done us.

* And just how was this week in quarantine, Scalzi? I mean, oddly enough, it was… fine? Not terrible, not great, and I’ve gotten to the point, I guess, where it doesn’t feel all that weird anymore. Again, it helps that “stay in your house and only see family and pets” is my default when I’m at home anyway, but the existential aspect of “you must stay at home” was not this last week weighing on me with any real urgency. It was just, meh, another week at the house. I do think it helps that the weather is now at a point where it’s consistently not cold — welcome to May! — so being able to step out of the house and not feel the immediate need to go right back in is nice. Yesterday it got up to eighty degrees! I’ll take it!

* I do think, leaving aside the politically-motivated bigoted gun-toting dipshits for a moment, a lot of people have gotten to the “we’re bored with quarantine” moment of things. This is different from the “we’re bored in quarantine” feeling everyone’s had for, what, two months now? This is different; this is the feeling of fuck it, imma see people and if I barf up a lung later, well, that’s on me. Honestly at this point I can’t say that I’m unsympathetic, even if understand that the science of viral outbreaks strongly suggests this will end up with a bunch of people barfing up a lung come Memorial Day.

To be clear: I don’t recommend going “fuck it,” and just dealing with the consequences later. For my own part, my May plans are to stay at home and do what I’ve basically been doing for the last couple months, although with fewer promotional appearances and (hopefully) more actual writing. I am saying I understand why people feel at that point. It’s not all about people being politically manipulated. It does have something with people feeling lonely and purposeless — and also, you know, worried about jobs and money and the future and things like that, which are tied into politics, but are also things which hit on a personal level, too.

* With that said, let’s not pretend that the rush to “get back to business” in defiance of science isn’t rooted substantially in politics. As others have pointed out, a state telling people to go back to work well in advance to it “flattening the curve” in terms of infections and deaths will likely save it from having to shell out more for unemployment, especially in Republican-controlled states where the capacity for handling unemployment has been whittled away to begin with.

Also, it’s becoming clear that the virus is generally affecting poor and/or minority communities substantially more than it’s affecting better off, white communities (this is, no surprise, correlated with those poor/minority communities having more health problems related to less ability to access health care). So lots of white people have been able to delude themselves into thinking that actually this thing isn’t that bad, especially if they live in places where they have not (yet) come into contact with people who have had the virus themselves. Alternately, there are white folks who understand what’s going on but actively don’t care if poor/minority communities are adversely affected because they “need a haircut” and/or just don’t give a shit what happens to those people, because they’re racist fucknuggets.

The science does seem to suggest we’re all setting ourselves up for a second round of infection and death and economic turmoil, but the politics of the moment, most specifically on the right, seems to have landed on the idea that it’s fine if some people die, because those people are probably old and/or poor and/or not white. This isn’t casting unwarranted aspersions, since there are conservative politicians and “thinkers” on record saying that they’re fine with people dying if it gets the economy chugging along again. And, well. They’re going to get their way, at least for a little while. I don’t think it’s going to work the way they want it to. But that’s what happens when you put ideology ahead of logic.

(“But what about Ohio?” Our governor is re-opening the state this month in stages — you can now go to the doctor and dentist again, and later this month retail shops will be open, all with certain procedures in place to protect workers and customers. And, we’ll see; I think DeWine and his people have handled things well to this point, a rarity among GOPers, but I also worry it’s too early. We’ll find out. At the very least I have faith at this point that our governor has been listening to actual scientists and understands the risks they’ve laid out to him.)

* I should just say I want to be wrong with the above — I would be delighted with COVID-19 being managed and more people not getting sick or dying, just with what we have on offer now. I would be happy to be able to sit in a restaurant or fly on a plane or visit friends casually. As I said last week, no one wants quarantine to continue; this isn’t fun for anyone, even the introverts. I would be very happy, in a month, to be the one to whom “We told you so” is being said to, rather than me being the one saying it. Please, please, please, prove me wrong. Just don’t be pissy with me if I’m not.