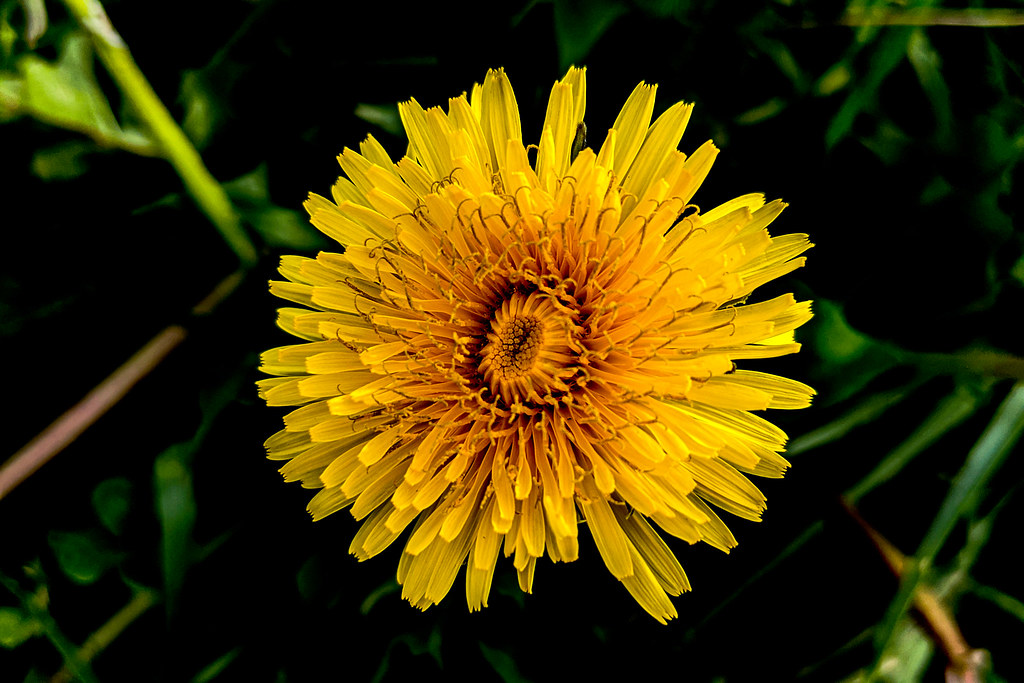 I noted here, I believe, that recently my dSLR, my Nikon d750, basically crapped itself, most likely from a faulty mirror mechanism. This wasn’t entirely a surprise to me — it had developed a hiccup several months back where the first photo after being turned on was a black rectangle as the camera remembered it needed to get the mirror out of the way to take a photo. I was not happy about this state of affairs but neither was I terribly put out; I have had the camera a sufficiently long time, and have taken a sufficiently large number of photos with it — literally hundreds of thousands of them — that I feel like I have gotten real value from the camera. I can repair it (and probably will, eventually, to pass it along), but I’ve been thinking of getting a new camera for some time now. Now, as it turns out, will be the perfect time.

But here’s an actual quandary: I want a new, dedicated camera, but I am also, if not cheap, exactly (and here I look around my office at computers and musical instruments), someone for whom utility-to-price is a huge motivator in purchasing. Which is to say that if I don’t think I’m going to get a lot of use from something — “use” being a very flexible term in this formulation, but let’s not go there now — then I can’t justify the price in my head. So right now I’m asking myself the question: Can I actually justify buying a new dedicated camera?

The reason why this is a question: Well, look at the photo above, of a dandelion, which I took on my walk yesterday. I took it with my Pixel 4; I saw the dandelion, bent down a bit, took the photo and then kept walking. Then I came home, fiddled with it some in Photoshop, and at the end of it had a picture that’s in many ways as good as one I might get out of a dSLR — a dedicated camera. So, do I need a dedicated camera at all? 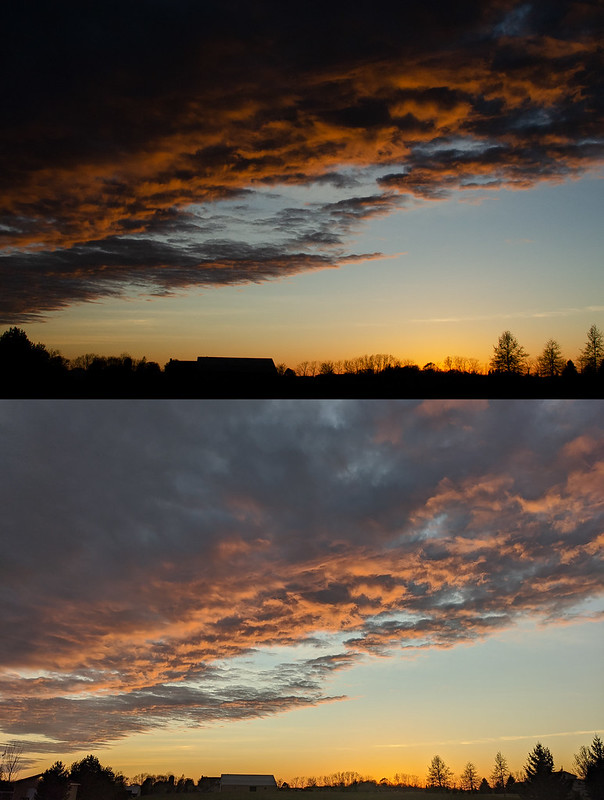 The top photo here is taken with a Nikon d5100 dSLR, an older but still serviceable dedicated camera that I’m using since the d750 crapped out. The bottom photo is taken with the Pixel 4. Both pictures were taken within seconds of each other — look at the cloud shapes for confirmation of that — and both are jpgs taken directly from the camera without any further editing on my part.

Which is the better photo? Ultimately, it’s primarily a subjective matter, I think — but that’s just it: It’s a subjective choice between a dedicated camera using a very expensive lens, and a cell phone camera. The dedicated camera here is nine years old, but the cell phone camera has a imaging sensor that could fit into the corner of the dSLR’s sensor. The d5100 relies on the user to work on the photo manually, either in-camera by fiddling with settings, or afterward in Photoshop, while the Pixel 4 lets the mighty power of Google’s machine learning do all the heavy lifting. There are choices to be made and preferences one might have, but at the end of the day, neither photo is so far and away objectively better — in terms of the technical aspects of the photo — that you would say a dedicated camera is necessary, on the basis of these photos.

So again: What utility will I get out of a new, dedicated camera, when the cameras in phones do such a very good job these days?

The answer for me might be paradoxical to some, and it is: The better cell phone cameras get, the more frustrated I get with their limitations — and the more I recognize how much better a dedicated camera is for those situations. 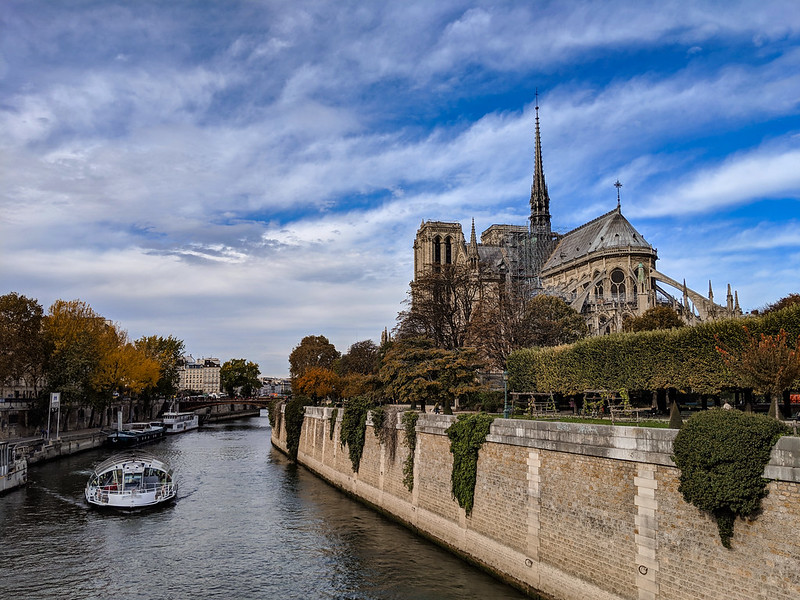 Let’s go back to the Pixel phones, with their cameras. I should note that they are and have been very, very good cameras, enough so that if I go somewhere and I don’t bring a dSLR, I don’t worry too much if I’m still going to be able to get good pictures. I even wrote about this fact previously.

But that said, their limitations — and the limitations of other very good cell phone cameras — still will pop out at you if you are more than a casual photographer. Their small sensors can only capture so much light and Google’s (or Apple’s or Samsung’s) AI can only compensate so much, and the choices they make are ones you have to live with whether you want to or not. The lenses on camera phones are likewise limited, which is why Google/Apple/Etc have spent so much time creating “portrait” modes to offer fake blur that their lenses can’t provide, and why literally everybody’s nose looks so damn big in selfies. Yes, you can buy add-on lenses for cell phones, but at that point the financial buy-in is high enough that you should start asking if it might not make more sense to get a dedicated camera. 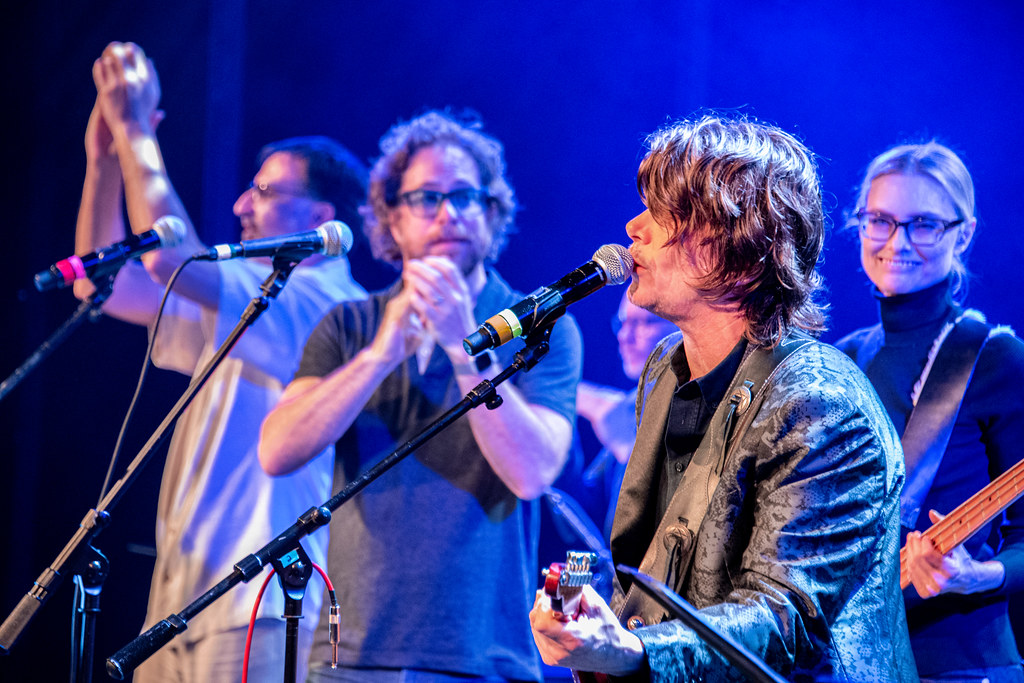 Also, good luck getting a photo like the one above from a cell phone, unless you’re directly on stage with the musicians, sticking a phone in their face while they’re performing. And even then the phone is going to struggle with focus and lighting in ways that mean the chances of you getting that live candid shot before the bouncers haul your ass off the stage is fairly low. There are camera apps on phones that allow you to specify ISO and shutter speed and other technical aspects of your photography, to be sure. But again, if you’re the sort of person for whom all of that matters (and you are comfortable fiddling around with these things), the chances are pretty good you’ve already got a dedicated camera, and you’ll be using that for everything put pickup shots.

Or to put it another way: cell phone cameras have gotten good enough that they will do 90% to 95% of everything that the average person would ever want out of a camera. And that is an unalloyed good thing! Everyone should have a camera that flexible and useful to them. But if you’re an avid photographer (or a professional photographer), you spend so much more of your time than the average person in the 5%-to-10% area where cell phones fall down, that you become painfully aware of how far they have yet to go, regardless of how far they have come. This isn’t about snobbery (or more accurately, shouldn’t be) — it’s about use cases. For how I use cameras, my Pixel phone, as wonderful as the photography out of it is on a regular basis, still can’t give me everything I want and need, and it’s frustrating for me that it can’t.

Which is why as cell phone cameras become better, I still find myself reaching for my dSLR, and why, in fact, I ordered a brand new one, which is scheduled to arrive at my house tomorrow (details forthcoming! Wait until it arrives!). I love my Pixel 4 camera, and I love that I always have a “good enough” camera on me. But “good enough” is still not good enough for everything I want to do, and for every picture I want to take. I will get enough use out a dedicated camera that it is still worth the expense for me. I suspect that will continue to be the case for a while.