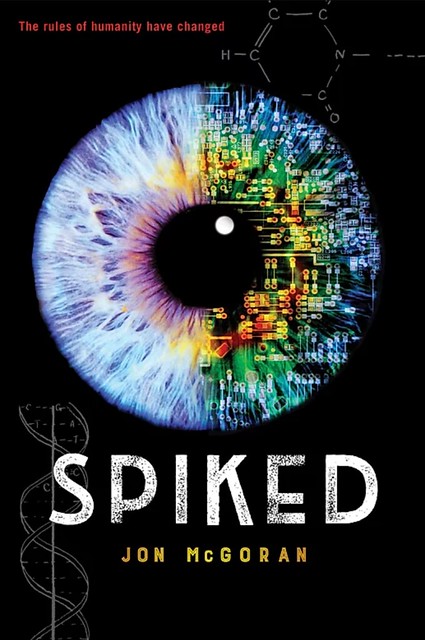 In the aftermath of writing his latest novel Spiked, author Jon McGoran found the reality of the moment catching up with the future of his fiction in ways he didn’t expect… and in ways that gave him food for thought.

One of the things that has drawn me to science fiction since I was a kid is the way it embraces­—or, as a writer, allows one to embrace—big ideas. I have one of those restless brains that is always churning out ideas: not always big, definitely not always good, and probably 60% in the form of puns. But some of them are big, and some of them stick with me. And some of those make their way into stories or books.

My Spliced series started with a single big idea: What would happen if genetic engineering technology matured to the point that it was available on the street as a form of body modification?

That idea sparked many questions, and many other ideas. What would the world be like by then? Transformed in many ways by climate change. Who would actually get spliced? Probably mostly young people. Why would they do it? Many reasons, including solidarity with the natural world, protesting its destruction, and preserving and honoring species going extinct. How would others react to them?

That last one became one of the defining themes in the books. I knew that if these chimeras existed, some people would seek to use them: some demonizing them for political gain, some seeking to label them as non-persons, and some trying to physically exploit them for profit. And yes, there’s a lot of overlap among those groups.

Those ideas were at the core of the first two books in the trilogy, and they remain essential to the final one, Spiked, as well. But Spiked also goes in different directions that are incredibly relevant today.

The people most vehement about labeling chimeras as non-persons are also most enthusiastic about embracing computer implants, called Wellplants in the book, named for the character who developed them and who also leads the anti-chimera backlash. Is it kind of hypocritical for one group of transhumanists to try to dehumanize another group of transhumanists? Heh-heh. Sure is. But people are like that, amiright? In my mind, Wellplants are a way to explore the impact of smart phones, the digital divide, and the ways in which wealth and technology can make some people very different from others.

The other big idea is… Pandemics.

Pandemics have been a part of the Spliced world from the beginning. Part of the backstory of the trilogy is that a flu pandemic some time between now and then contributed to a depopulation that altered the social landscape. Combined with energy scarcity and a costly new super-efficient energy distribution technology, they caused a virtual abandonment of sprawling suburbs, a blight that mirrored in ways what happened to inner cities in the last century.

But pandemics reappear to take center stage in Spiked. I don’t want to go into too much detail (after all, the title is Spiked, not Spoilered), but it has been eerie. I spent a couple of years researching pandemics (especially the 1918 Spanish flu epidemic), first for the back story and then for Spiked, then writing scenes of a pandemic tearing through my city of Philadelphia, and finally watching one take place in real time, while waiting for the book to come out.

I write a lot of near-future science fiction and science thrillers, so seeing ideas from my books come to life is nothing new, but this has been orders of magnitude different. And much sadder and creepier.

There are a lot of differences between COVID-19 and the pandemic in Spiked, but a lot of similarities as well, like viruses jumping from species to species and widespread quarantines.

At the risk of revealing a little too much, the pandemic in Spiked doesn’t just happen, and part of the impetus behind its release is to save the environment in the face of dwindling resources and impending climate collapse, to save the Earth—for the right people, of course. It’s an idea I find both reprehensible and fascinating. (I explore another version of the same idea more deeply in another novel that is as yet unfinished).

The COVID-19 pandemic has been a human tragedy of colossal proportions on many fronts. But one razor-thin silver lining bears out some of the ideas in Spiked: the accompanying global slowdown has had a strikingly beneficial impact on the environment. In India, mountain ranges long invisible have reappeared in the distance. Satellites over China reveal a substantial decrease in air pollution and an increase in the clarity of the atmosphere. In a few short (or, subjectively, excruciatingly long) weeks, the air and water have grown demonstrably cleaner and healthier. In some places carbon emissions have plummeted to extents that have previously been declared unachievable.

No one expects these benefits to last, no one wants the pandemic to last, and no one seriously sees this as a long-term solution to climate change. But it does raise some interesting and difficult questions. Perhaps the biggest of them is this: If the world is capable of taking such drastic action (or inaction, as the case may be) to save hundreds of thousands of lives in the short term, why are we so incapable of taking similarly drastic action to save hundreds of millions of lives in the long term, not to mention, the planet itself?