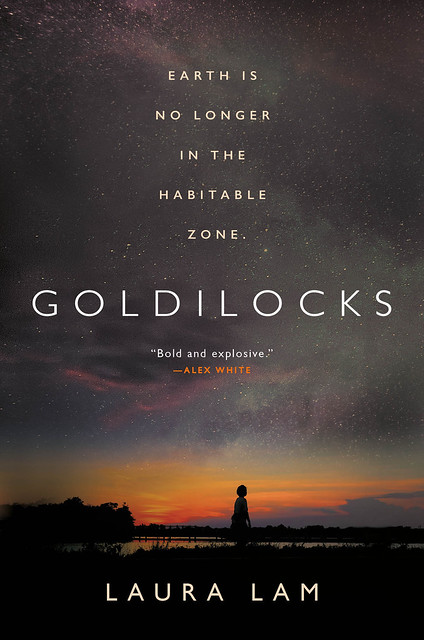 Start with cinematic dreams and stellar ambitions, and what do you get from there? For Laura Lam, you get Goldilocks, her new novel. She’s here to tell you how it all came together.

Gravity. Interstellar. The Martian. Armageddon. Ad Astra. The Mars TV show on Netflix that’s OK, not a film, and also half a documentary. Sunshine. Moon. Some are more scientifically plausible than others. They have tone and pacing ranging from cerebral and contemplative to high octane and a little silly.

I love the stakes of space, the vastness and unknown of it all. It keeps secrets, even as scientists are getting better at peering into its depths.  It reminds me that humans and the Earth are just a tiny speck in the grand scope of things.

Yet a lot of astronaut films arise from those initial machismo beginnings of the Mercury 7 and those who have The Right Stuff. And I love watching the space cowboy archetype. But in a lot of them, the female characters are relegated to people back on the surface, either as human computers, or comms people, or the astronaut’s wife (as happened to Liv Tyler twice in two different films). We’ve started seeing more women in space—Anne Hathaway in Interstellar, Jessica Chastain and Kate Mara in The Martian—but the only one that seems to star a woman is Gravity, with Sandra Bullock. That’s maybe my favourite astronaut film, but she’s also alone for the bulk of it.

I really wanted to see an astronaut film with a cast of women front and centre. Working together, relying on each other, and of course, starting to learn that they were all keeping secrets. So I started writing Goldilocks. Though as a book, not a screenplay, since I have no pull in Hollywood.

There’s so much fascinating space history, past and present, about people who weren’t the default picture of an astronaut that I hadn’t learned about until relatively recently. The Mercury 13, who took the same tests as the Mercury 7 and performed better but weren’t allowed to go into space anyway. The African American human computers highlighted in Hidden Figures. Margaret Hamilton, with that amazing phot of her standing next to the pile of code she wrote for Apollo 11 that’s taller than she is. Mae Jemison, who was the first African American astronaut in space AND was a character on an episode in Star Trek: Next Gen, which is so damn cool. We just had the first all-female space walk 6 months ago after the first one was cancelled because they didn’t have two space suits of the right size, and we still haven’t had a woman on the moon. There have been no openly trans and/or nonbinary astronauts yet as far as I am aware (although trans man Sam Long has been campaigning for it). We only found out Sally Ride was gay after she passed (or at least I did). I want more films and books about people like them. One of the Mercury 13, Wally Funk, is in her 80s and still trying to get into space through Virgin. Send Wally Funk to space!

The Mercury 13 in particular helped me coalesce the purpose behind Goldilocks. I imagined a future where bigotry kept rising, particularly of the sexist variety, since things like the Heartbeat Bills and the discourse around women running for politics were fresh in my mind. I tend to pitch the book as The Martian or Interstellar meets the Handmaid’s Tale, which works well enough as a shorthand starting point. Most books have a series of ‘what if?’ questions behind them that echo that underlying Big Idea, so mine would be:

What if Earth was dying and there was a potential lush and verdant Planet B, called Cavendish? What if the best people for the mission to go there were women, and a woman had even financed the bulk of building the spaceship, but at the last minute they were thrown off the mission to be replaced by men? What if they decided ‘screw that’ and stole the spaceship to save humanity anyway? Then what if after they left, things started really going to hell in a handbasket back on Earth? And what if everyone on board had secrets that, if unleashed, could fracture the trust they need to complete the mission?

I did a lot of research. I tried to keep the science reasonably accurate, with a few big extrapolations of our tech potential in the near future (warp drive, a gravity ring, etc). I do not have a scientific background, so I figured if I could describe things in a way that made sense to me, it would make sense to most other laypeople. I did a lot of solo research, but also ended up speaking to a critical care doctor who is a visiting research scientist for the Cardiovascular and Vision lab at NASA, the former head of life sciences for the Johnston Space Center in Houston, two astrophysicists, a professor of space law, an evolutionary biologist who runs a lab looking at algae in the context of climate change, and several experts in infectious diseases and vaccines, which made going into 2020 armed with that knowledge more than a little alarming.

So I wove in a love of science, my fears for the future of this planet, my favourite bits of astronaut films, and interpersonal dynamics of a group of women with ultimately very different ideas of what it means to save the future of humanity. It will probably never be translated to the big screen (though I guess you never know, I can dream), but damn if it wasn’t a hell of a lot of fun to imagine what it would be like to go into space and to have the right stuff.